4k projectors have a considerable market impact due to their application in various settings such as auditoriums, museums, large venues, cinemas, and not until recently in classrooms. Considering 4k projectors’ ability to vary viewing experiences with different projection display sizes, it has been promoted in home entertainment systems, a growing market, especially considering the impact of the COVID-19 pandemic.

As of 2018, North America constituted the largest 4k projector market, with the United States spearheading the market having a large consumer base, coupled with high-income households. 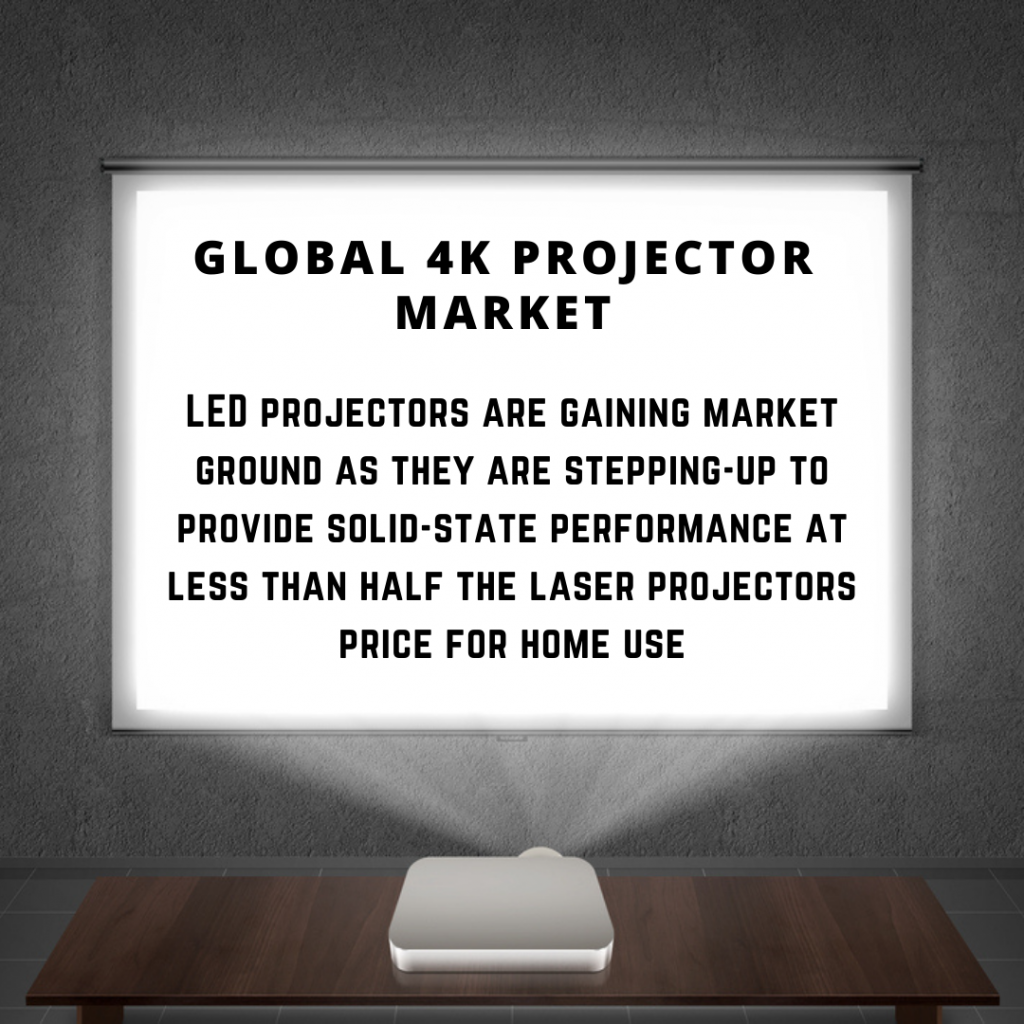 Growth in the region was propelled by demand for advanced resolution, brightness, and in-depth detail display tools and the region’s technological prowess. Closely following North America, Europe frequently has set-up initiatives to upgrade and expand the 4k technologies industry.

However, on conducting a sufficient market region, 4k projector manufacturers realized the Asia-Pacific region’s potential. With mammoths like India and China that constitute about 40% of the world’s population, the Asia-Pacific market seems lucrative in the coming future.

However, The COVID-19 pandemic has hit the market with a blow, puncturing the global economy and consumer trends. It has affected production directly, including demand, and created a supply chain and market disturbance.

Furthermore, as its impact on firms and financial markets has been immense, the 4k projector market is expected to slump for the year 2020 with slow recovery in the coming years. This recovery is likely to be spearheaded by the vast 4k content available on increasingly accessible streaming services.

The big players in the market are making it much easier to own a 4k project which offers full-fledged high-quality entertainment at any time of the day, unlike earlier when one had to put together an ample amount of equipment to set up the same.

The market segment for 4k projectors is divided into 3 groups: Entry-level, mid-tier, and premium. Some projectors start under 500$ and those that cost as much as a new car. It is mid-tier and premium projectors that witnesses significant improvements in technology with entry-level projectors showing minimal improvements. The recent trends in the 4k projector market are as follows:

Asia-Pacific is envisaged to be the prominent region if not market leader with increasing 4k services and initiatives to aid the 4k projector market’s rise. As of 2018, Optoma holds the world’s No. 1 4k projector brand with 21.9% of the market share.