1.There is a growing trend of aerobatic training in armed forces around the world. Aerobatics enhance a pilot’s  ability to recover from unusual flight conditions. And it became one of the important factor considerations for flight safety training programmes.

2.The aerobatic flight training helped to gain tactical knowledge and maneuver was found to allow aircraft for skills management during the aerial combat or dogfights between fighter air crafts.

4.The armed forces around the world use aerobatics highly for showing battle preparations and respective armed forces prowess. Aerobatics helps to teach military fighters as means of improving flying skills and tactical knowledge in combat.

Aerobatics is a type of aerodyne which is heavier than air craft. It is widely used in aerobatic competitions as well as fight exhibition both. It is performed in gliders and aeroplanes for recreation, sport and training purposes.

The rise of leisure activities has become the major factor to boost the use of aircraft for aerobatics projects.The global aerobatic aircrafts market is severely affected by the global pandemics.

The implementations of lockdowns around the countries, international and national transport has immensely impacted the supply chain of raw materials and spare parts. The lack of raw materials supply has reduced the overall production of aerobatic aircrafts, which has negatively affected the market growth. 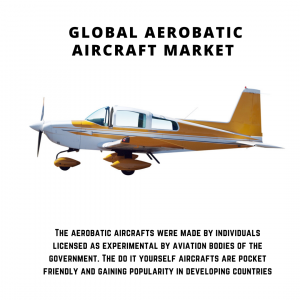 On a positive side, Governments around the globe are likely to reduce the norms for restarting the activities of the aircrafts businesses.

The rise in demand for aerobatics is obtained for the purposes of training and pilots are often trained on these aircrafts before they start flying any military aircrafts due to the compactness and small size of aerobatic crafts.

The aerobatic aircrafts were made by individuals licensed as experimental by aviation bodies of the government. The do it yourself aircrafts are pocket friendly and gaining popularity in developing countries.

The government agencies were investing a higher amount on military training purposes, which in turn added fuel to the growth of the aerobatic aircraft market. The leading manufactures were focusing on producing most cost effective single engine aerobatic aircraft to strengthen their roots.

The world’s top most pilots fly the Extra 330SC,Which is used in the United States and produced by extra aircraft in germany. The Extra 330SC contains single seat and propeller driven. It weighs 1291 pounds and carries fuel tanks in the airplane’s fuselage.

The Extra 330SC was certified by the European Union Safety Agency. But it is classified as experimental/exhibition.

The russian built Sukhoi SU-29 is a two seated aircraft and it was designed for military training purposes. The Sukhoi SU-29 has a reputation of having a steep learning curve and this piston-driven airplane is also known for its nimbleness in the year.

These aircrafts are handcrafted and noted for their ability to adapt well to new technology. The Pitts S-2C is noted for its sleek vertical lines and tremendous hang time. It is powered by a patented propeller known as “The Claw” and it offers a wing span of 20 feet.

Zivko aircraft Guthrie, Oklahoma, has given the aerobatic aircraft the Edge 540.The aircraft has a reputation with an impressive climb rate of 3,700 feet per min. The Edge 540 is an single engine aircraft but zivko offers two seat version called Edge 540T.These aircrafts were popular in United States as a racing plane plus for aeronautics.

The inorganic growth strategies of these players Includes