The aim of a brake system is to generate a braking torque to retard the road wheel and thus the vehicle to which it is fitted. The purpose of friction brakes is to decelerate or to stop a vehicle by transforming the kinetic energy of the vehicle into heat, via friction, and dissipating that heat to the surroundings. For power-driven vehicles and their trailers this results can be achieved through appropriate required parameters of observation being kept in analysis. 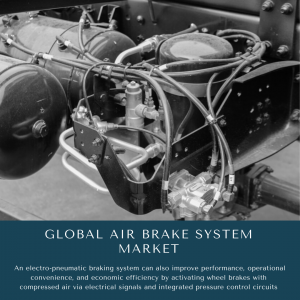 Instead of employing hydraulic fluid, air brakes use compressed air. Drum brakes, disc brakes, or a combination of the two are all examples of air brakes that may be used. A compressor placed on the engine is used to pressurise the air. When the compressed air is ready, it is pumped into the air storage tanks. Service brakes are applied with air pressure, and parking brakes are released using air pressure as well.

Heavily laden commercial vehicles and trucks are equipped with air brake systems. Only the driver’s leg may be used to apply the braking force. Rather than relying just on the foot pressure to activate the air brake, you use compressed air pressure instead. Throughout the system, there are several air circuits. A spring-loaded parking brake is activated by releasing air pressure in the chamber’s parking brake section, which then engages a parking brake by spring force. Parking brake can also be utilised as an emergency braking system, thanks to the parking brake’s versatility.

In order to operate the air brakes, a crankshaft or gearbox shaft drives a two-stage air-compressor with a piston. When it’s done, it releases compressed air into the air reservoir through an unloader valve, which draws air from outside and compresses and releases it. As soon as the reservoir’s pressure reaches its maximum, the unloader valve opens, allowing air to enter.

As the world’s population and urbanisation continue to expand, so has the demand for accessible and inexpensive methods of transportation. The recent rise in infrastructure investment by rich and emerging countries has resulted in a greater demand for high-speed and fast trains. Japan, Germany, and the United Kingdom, for example, aim to connect their major cities with high-speed trains.

Since air brakes are failsafe devices that need less oil in the actuation system, these high-speed trains, as well as other train types, are fitted with them. The development of railway networks with a larger number of electrified trains would be the result of an increase in infrastructure spending. This technology has a higher cost, but it doesn’t make much difference in tiny vehicles with hydraulic brakes. When it comes to large vehicles like heavy duty trucks, semi trailers and buses where air brake systems lose out to traditional brake systems because of the cost parameter, there is no comparison. The air brake system’s excessive air leakage rate is also a cause for worry.

Air brake systems are projected to be the most popular in Asia Oceania due to the region’s high production of heavy commercial vehicles compared to other areas. Due to the huge manufacturing of heavy-duty vehicles in China, the country is the world’s top air brake system manufacturer. Increasing industrialization and urbanization in emerging nations like China and India, combined with a growing awareness of vehicle and driver safety, will boost the Asia Oceania air brake systems market.

The Global Air Brake System Market can be segmented into following categories for further analysis.

Although each company has a different design approach to the airless tire, most share the same basic concepts. Brake pads are used in disc brake systems and brake shoes are used in drum brake systems. It’s called brake lining, the consumable part sliding on disc/drum surfaces attached to the pad/shoes backing plate. State-of-the-art brake pads are constituted nowadays by resin-bonded composite friction materials, these are specially formulated to give good friction and wear performance

As commercial vehicles have become more complex over the last few decades, so has the air-brake system. ASR (Automatic Traction Control System) and ABS (Anti-lock brake system) are electrical technologies that, in conjunction with valve technology, have made driving safer in recent years. An electro-pneumatic braking system can also improve performance, operational convenience, and economic efficiency by activating wheel brakes with compressed air via electrical signals and integrated pressure control circuits.

New ABS/ASR features have been improved. Electric and pneumatic brake systems are nearing completion, and rigorous tests are being conducted to ensure they are ready for the market. When an electro-pneumatic braking system is interconnected and exchanges data with other car systems via a May bus system, its full potential can be unleashed. Now we have all we need to optimise semi trailer rigs and vehicle trailer stability, especially in terms of lateral dynamics.

To stop or slow down the vehicle, a pneumatic brake or compressed air brake system uses compressed air instead of liquid fluid from a hydraulic system to force the master cylinder piston, which then pressures the brake pads. Air brakes systems are anticipated to witness significant growth over the years, owing to rise in awareness among consumers about vehicle safety and security while driving.

Wabco has designed a latest technology-based integration of the Air Brake systems, MAXX which falls under the category of Air Disc Brakes and mainly aimed towards retrofitting within the heavy-duty trucks and medium duty trucks segment of operations. It consists of high performance single-piston air disc brakes, designed to bring the most demanding heavy-duty trucks to a safe stop. It can reach brake torques up to 30,000 Nm with a unique adjuster mechanism that optimizes running clearance. The Brakes are technologically advanced in a manner wherein a continuous adherence can be done when the system comes near to an end-of-life or plug play continuous wear through a sensor-based signalling.

Meritor has been involved in production of Air Brake systems under the Air Disc Brake category. Meritor EX+ LS air disc brakes are designed specifically for linehaul and trailer applications. They are based on the EX+ architecture, which has an established track record of reliability, and have been thoroughly tested to meet or exceed client expectations. The taper wear is controlled by a large piston diameter, pad life is extended. Based on the established EX+ braking system, the adjuster mechanism has been developed. 2025 reduced copper-compliant brake pads are standard with N Type friction. Braking piston seal is shielded from heat exposure and debris, resulting in a longer-lasting brake system. It has a pad wear sensing mechanising which immediately communicates when pads have worn to the replacement point.