Aircraft fire protection is critical since, once airborne, any fires must be extinguished using equipment on board the aircraft. A fire must be maintained under control for a lengthy time before an emergency landing can be made on another airfield, especially during flights over rural locations. In addition, an aeroplane has sections that are not accessible when in flight. Remote sensing and (semi-)automatic devices are required in various parts of the aircraft.

Fire detection and suppression systems aboard aeroplanes, however, include fire detector sensing components located in numerous high-movement regions surrounding aircraft engines. Because of their vulnerable placement and the delicate nature and tiny size of the fire detecting components, they are more susceptible to damage during maintenance operations. 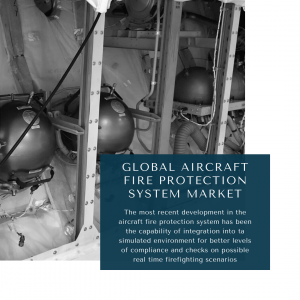 A fire zone is an area or section of an aircraft that the manufacturer intended to need fire detection and/or fire extinguishing equipment as well as a high level of inherent fire resistance. For the purposes of this definition, a “fixed” fire extinguishing system is one that is permanently placed rather than one that can be carried around like a hand-held Halon or water fire extinguisher.

A contemporary aircraft’s fire protection system, as well as many older aircraft’s, comprises a fire detection system and a fire extinguishing system. As a result of this particular aspect, the number of applications of sensing elements in very sensitive sections of aircraft has been decreased significantly, particularly in low-cost air carriers, and the growth rate of the market for aviation fire prevention and detection systems has been slowed.

With a view to enhancing air transport safety and reducing fire hazard risks while in flight, aviation regulatory bodies around the world have been implementing increasingly strict safety regulations, laws, and standards to ensure that air carriers around the world install better aircraft fire protection and detection systems. has pushed for more stringent criteria for aircraft fire prevention and detection equipment in order to improve the safety of air travel. Aircraft fire prevention systems are likely to see significant expansion as a result of this.

Regulatory authorities like the European Union and the International Civil Aviation Organization have already set a deadline for the deactivation of all halon systems and extinguishers. Manufacturers and aircraft original equipment manufacturers are expanding their spending in the development of new fire-fighting systems as a result of this.

Civil aviation and other businesses like oil and gas, military, etc. currently meet their halon needs by using recycling agents that were previously used in other industries or on retired aeroplanes. Investments in alternate sources of fire suppression materials and systems are expected to help this market sector develop even more in the future.

Both the European Union and the International Civil Aviation Organization (ICAO) have mandated to phase out halon-based agents to be used a fire suppression agent considering their higher impact on the environmental deterioration. With growing passenger traffic, the region’s airlines are making plans to expand their destinations and fleet of aircraft. These factors are propelling the growth of new orders and deliveries of aircraft, thereby boosting the growth of the aircraft fire protection systems market.

Additionally, the increasing military spending of the region is supporting the growth of modernization and procurements of military aircraft. Furthermore, the current growing fleet of aircraft is generating demand for fire suppressing materials which must be regularly replaced after certain time-period.

The Global Aircraft Fire Protection System Market can be segmented into following categories for further analysis.

By Compartment of Application Type

In recent years, the interest in full or hybrid electric power for aeroplanes has risen as a result of the automobile industry and current mainstream developments in transportation.

A properly designed, installed, operated, and maintained fire alarm system can reduce the losses associated with an unwanted fire in any building. These losses include property and, more importantly, human life. The primary motivation for fire alarm system requirements in aircraft and fire codes is to provide early notification to the aircraft occupants so they can take the necessary mitigation measures, and to activate the suppression service so it can respond to the fire.

The most recent development in the aircraft fire protection system has been the capability of integration into ta simulated environment for better levels of compliance and checks on possible real time firefighting scenarios. Recent improvements to a fire-simulating computer model created at the National Institute of Standards and Technology (NIST) may now provide some much-needed direction.

In a new study, a team of NIST and FAA experts evaluated the programme against a real-world scenario in which a fire broke out inside a grounded aeroplane and found that the software accurately recreated recorded temperatures and detected hot spots in the attic. In the Fire Dynamics Simulator, developed by NIST, heat and smoke are simulated as they travel through a fire.

There are new suppression system which are retrofitted with an inert carbon-based chemical that powerfully fights fire yet is safe for property, people, and to the environment. It looks like water but doesn’t cause the damage normally associated with water because it contains no moisture. The result is lower repair bills and less impact on business. It has no harmful impact on the environment. It has an atmospheric lifetime of only five days while the closest chemical alternative has an atmospheric lifetime of 33–36 years.

An in-flight fire is probably the most serious in-flight emergency and must be brought under control as soon as possible. Considering the crucial role that time plays in this type of emergency, it is imperative that no time is lost when attempting to extinguish the fire. Some people are against using halon fire extinguishers. Some members of the flight crew were apprehensive to deploy halon in the event of an in-flight fire. The FAA Advisory Circular 120-80 addresses the use of halon fire extinguishers and emphasises the efficacy of Halon in battling an in-flight fire.

Firetrace International which operates as a subsidiary to a UK based conglomerate has been involved in development of large-scale application-based engineering aspects of fire protection and suppression systems. These are focused on large scale development for better clean residue requirements in the aircrafts on application.

The FM 200 product operated by the company, also commonly known as HFC-227ea, is a clean agent fire suppressant for Class A, B, and C fires and meets NFPA Standard 2001 Clean Agent Fire Extinguishing Systems. Clean agents are fast and effective in suppressing fires, are safe in occupied spaces, and do not leave a residue. FM-200™ is low in toxicity and does not pose acute or long-term dangers when handled per the manufacturers’ recommendations. The vapours from FM-200™ have little to no effect on the skin or eyes, but when in liquid form, on contact, it can freeze the skin or eyes, causing frostbite.

Meggitt PLC has been part of a major development in the fire suppression and other maintenance / detection services within the aircraft operations on terms of its commercial aviation capabilities. It has been operating and designing the greenest advantageous based suppression system.

The Systems are designed in such a manner so that they are equipped with a unique flow-metering design enabling precise release of the suppression agent. This minimises the need to carry unnecessary agent that can increase overall aircraft weight. It uses the high-rate, multi-shot extinguishing bottles put out fires (engine, APU and cargo) within seconds using directional valves and distribution tubing solutions for total flooding. Bottles can be sized anywhere from 164cm3 to 0.04m3 (10 to 2,500in3) and can be made from steel or titanium, depending on weight requirements.