The term ‘e-bike’ refers to bicycles that include a tiny electric motor and rechargeable batteries to supplement the rider’s power. Other terms that are occasionally used include pedelecs (from pedalled electric cycle) and EPAC (electric power-assisted cycles). Some of the most powerful e-bikes look like scooters.

To be classified as an e-bike, the vehicle must still be capable of being pedalled by the user; this separates e-bikes from electric scooters and motorcycles. A standard E-bike may ride at speeds ranging from 25 to 32 km/h (16 to 20 mph), depending on the rules of the nation where it is marketed. 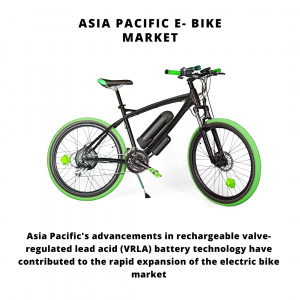 Compared with a motorcycle, e-bikes perform very well on almost all metrics. All estimated motorcycle emissions are several times higher than those of an e-bike, with the exception of SO2 and lead. Due to the restrictions on gasoline motorcycles, substantial cycling infrastructure, and increased vehicle and public transport congestion, e-bikes have grown in popularity.

However, the popularity of e-bikes has not expanded throughout Asia. In reality, e-bikes are scarce in cities throughout other Asian countries. In nations where gasoline two-wheelers dominate the mode split, replacing those vehicles with electric two-wheelers might enhance air quality and cut greenhouse gas emissions.

The advantage of e-bikes has become more prominent in recent times. The big companies’ involvement helped to make it even better. They have tried to include many sophisticated technologies in the design of this e-bike. Brushless motors replaced the brushed ones to make it durable, efficient, and noise-free.

Taiwan has been devoted to the electric bike business during the last decade with many resources from government, academics, research institutes and industries.Taiwan has been fulfilling in the past years an increasingly important international role in the export of e-bikes. The small country has been ranked as Europe’s 2nd biggest supplier of e-bikes. The current political developments suggest that Taiwan might increasingly be competing with China in its role as Europe’s biggest supplier of e-bikes.

The growing adoption of electric bicycles (e-bikes) has sparked discussion about their position in China’s urban transportation system. While some study has been conducted to assess the effects of e-bikes on the transportation system, there has been little effort done to follow e-bike use trends over time. The Infrastructure support under China within the Asia Pacific Region has been the most technologically advanced and influential electric bikes in the region. In China, there are two noteworthy national policies that have provided the electric bike National Technical Standards (China Central Government, 1999) defined standard sizes and performance characteristics for electric bikes with comparable shape and function to traditional bicycles.

In Japan, their usage as a replacement for vehicle travels of less than 10 km is relatively safe. As the population ages, more and more people are unable to drive because of health issues. People over the age of 65 often travel on footways and small roads in electric scooters, electric wheelchairs, and three- and four-wheeled electric vehicles that go at low speed. This 50 percent power aid is now being reviewed by the Japanese government with a goal of raising it to about 70%

The Asia Pacific E Bike Market can be segmented into following categories for further analysis.

The most recent electric bikes have been integrated with an accumulator battery with a capacity of 245-watt hours or more that is considered to be one of the best-in-class experiences provisioned by the manufacturers. Hud and Mid drive motors are one of the newest entries into the drive systems market. It attains a 100rpm, power delivery is up to 50% higher than the requirements in the current market.

Asia Pacific’s advancements in rechargeable valve-regulated lead acid (VRLA) battery technology have contributed to the rapid expansion of the electric bike market. Growth in the lithium-ion (Li-ion) battery business and a switch from VRLA batteries to Li-ion batteries may lead to further advancements in performance and cost.

E Bikes are a part of the newest emerging technology in the complete global market of EV operations wherein the electrification has propagated towards better levels of compliance to emission regulations and alongside the possible Electrification adaptability on a global scale.

In e-bikes, the difference is in the motor system, the controller, and the battery. For a comfortable ride, the motor provides external power. As long as it is utilised properly, an e-bike is better than a regular bike since it provides more power when needed.

Trek Corporation has brought in new E Bike technologies into the Asia Pacific market which has been of major importance. It has recently introduced the Marlin 8 under the Mountain Bikes segment. It has been integrated under a light frame with internal cable routing, a smoother-feeling RockShox Judy Silver fork with a TurnKey hydraulic lockout, Shimano hydraulic disc brakes and tubeless-ready Bontrager. The wide-range 11-50 cassette gives you all the gears you need for clawing up climbs and blazing down descents.

The F Wheel has been part of a new electric bike in the PRC – China. There are two models of the bike with two different batteries: a 360Wh model and a giant 1kWh model. The battery cases are the same and they look identical, but one adds a couple more pounds and nearly 200% more range. It runs a 48V system, which if you aren’t familiar with e-bike voltage levels, is a pretty powerful system.