The value chain of the bicycle industry operates at two levels – small and medium enterprises, produce bicycle components and accessories, whereas the larger manufacturing units/OEMs focus on bicycle assembly and production. The SMEs, which rely mostly on unskilled and semi-skilled labour, have expanded through time but in an unorganized and informal way, and are primarily involved in the production of bicycle components and parts. 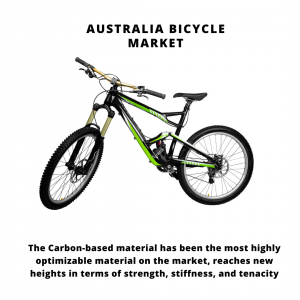 Most advancements in the bicycle business are driven by the quest of lightweight and high-strength bicycles in newer, superior materials and improved design. This has resulted in the introduction of a wide range of new equipment and techniques for making bicycles and parts, which the Indian bicycle industry has not always kept up with.

Consumers choose from a variety of bicycle models. Road bikes were descended from the original bicycles and were mostly used on paved terrain. The fundamental design has altered very little since its origin, as shown by thin smooth tyres and a bent handlebar. The triathlon, or time-trial, bike was one version of the road cycling discipline. Individual races over a set distance against the clock were planned for these machines.

The Australian bicycle industry, like all Australian industries is affected by the current global financial situation, and with the purchase of bicycles considered discretionary spending, we are reflective of Australians spending habits. With minimal manufacturing in Australia, all major brands of bicycles are manufactured overseas and imported into Australia.

The Australian bicycle sector, like many Australian sectors, are subject to several Australian Standards, two of which are mandatory and four main standards which are voluntary. To utilize the current standard AS/NZS 2063:2008 bicycle helmets, as an example, an individual company in Australia has considerable costs to meet the testing requirements of this standard.

The Australian Bicycle sector is made up of an active and diverse range of recreation, advocacy and sporting organizations. In general, they have been very effective in providing cycling events and services to the Australiancommunity for over three decades. A further variable cost incurred is the design costs to modify helmets to meet Australian Standards. As Australia has the strictest helmet standards in the world, further engineering costs are incurred in most instances to modify the helmet to meet these standards.

According to the Australian government data, there has been a 45 percent rise in involvement over the last ten years, making it the third most popular physical activity in Australia, trailing only aerobics/gym/fitness and swimming and ahead of jogging, golf, and tennis.

Members of the industry have been involved in the process of bringing six Australian standards under the auspices of a single committee at Standards Australia. This “super-committee” is supposed to simplify the process of developing, reviewing, and implementing bicycle-related standards, as well as increase communication with key stakeholders about the standards.

The Australia Bicycle Market can be segmented into following categories for further analysis.

Bicycles have been part of the most recent technological integrations in a drive towards its suitability towards off-road and other terrain requirements in the market. This has brought upon new gear and drive systems to be innovated for better experience and ease of usage in operating the bicycle as required at all times by the user.

The most innovative requirement has been the tireless tube presence in the bicycles as part of all terrain operations in the market. Tubeless tyres have become an industry standard, and tyre insert systems have gained in popularity in recent years. CushCore products allow riders to use lower tyre pressures without fear of flats or rim strikes, resulting in increased grip and vibration dampening on the trail. We hope that additional companies develop their own tyre insert solutions to address the perennial problem of flat tyres.

The Carbon-based material has been the most highly optimizable material on the market, reaches new heights in terms of strength, stiffness, and tenacity, and even aluminium can’t stand up to comparisons when it comes to weight. This alongside the drive and gear systems has brought upon the Shimano innovation into presence within the market. Shimano introduced a 12-speed bike with wireless technology plus the inclusion of coin cell batteries and wireless transmitters in shifters, wireless receivers in derailleurs and a 12-speed cassette configuration.

Bicycles have been part of the most traditional and forthcoming requirements placed in the society wherein they have been an active part of the green initiatives towards reduction in fossil fuel usages in the society. Bicycles also has been the part to become the most economical mode of transportation around the globe for better affordability and sporting requirements as well.

Jamis Bikes has introduced the Allegro Bikes section of technology for better sporting requirements and affordable technology-based cycles in the market. The Allegro A Series has been integrated with lightweight carbon reinforced metallic structure. It’s made of lightweight triple butted 6061 aluminium tube. Aluminium Allegro frames weigh 14 ounces less than steel Coda frames. The Cycle series are integrated with the Shimano Gear System on top swing front derailleurs. It has a triple chainring and 11-32 cassette make it possible to summit almost any hill.

Apollo Bicycles has been part of the much-required Mountain and Road Based Off Terrain Cycles for sporting requirements. It has been involved in introducing new blends of ultra-models into the market. Apollo Racing Model Ultegra Spec Version has been one of the most advanced bicycles in the market. The running gear is all Shimano Ultegra 6800 11-speed, a groupset that is fast proving to be a popular and reliable choice. It has also introduced the Alloy Endurance Series which has been designed as Carbon Endurance bikes, the Giro models use a lightweight 6061 alloy.