The purposel of an airbag is to slow the passenger’s forward motion as evenly as possible in a fraction of a second. There are three parts to an airbag that help to accomplish this. The sensor instructs the bag to inflate. Running against a brick wall at 10-15 miles per hour causes inflation (16 to 24 km per hour). As soon as there is a mass change, a mechanical switch is turned to close an electrical contact, signalling to the sensors that a collision has happened. 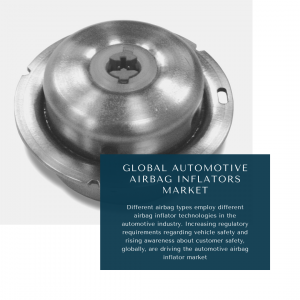 One of the sensors is equipped with an accelerometer integrated into a microprocessor that collects data on movement. Sodium azide (NaN3) interacts with potassium nitrate to create nitrogen gas in the airbag’s inflating mechanism. As the airbag is inflated, the nitrogen is blasted into the bag. Early efforts to adapt the airbag for use in cars bumped up against prohibitive prices and technical hurdles involving the storage and release of compressed gas.

The inflation mechanism is quite similar to a solid rocket booster in its design. To inflate the bag, the airbag system uses a solid propellant that burns at a high rate of speed. At up to 200 mph it practically explodes from its storage location. The gas immediately dissipates via microscopic holes in the bag, allowing you to move.

Airbag inflator sales are expected to grow faster in Asia-Pacific than in Europe. Asia’s primary airbag inflator markets will likely remain China, Japan, and South Korea, but India is expected to be the new development engine for the region’s rising need for these devices. Manufacturers in China are the world’s largest in the light car sector. Through the China New Car Assessment Program, the Chinese government has made the use of seatbelts and frontal airbags a requirement for drivers.

There are expectations that by 2020, the number of airbags installed in Chinese automobiles will match those of Europe and the United States All of this has been made possible through a variety of government-sponsored promotional efforts such as commercials and highway hoardings In the next years, Europe and North America are also expected to have good growth prospects. North America and Europe have a far higher penetration of airbags than Asia-Pacific because of the stricter passenger safety regulations.

The rise of the automotive airbag inflator market may be attributed to a number of factors. To name a few, there have been advancements in technologies such as flexible vent technology and stricter government standards for airbags in automobiles. Among the other reasons driving the market are the increasing penetration of curtain and side-impact airbags, rising vehicle production, the introduction of more bags per vehicle, and the increasing number of collision and car crash incidents.

The Global Automotive Airbag Inflators Market can be segmented into following categories for further analysis.

By Inflator Type of Usage

For a long time, airbags were mostly found in high-end luxury cars. As a result of increased regulatory pressure, strong market rivalry as well as increased concern from consumers about safety, the existing scenario has been transformed. All of these factors make it more important than ever for automakers to install Airbags in every vehicle, regardless of its market category.

Throughout the years, the Airbag inflator technology used in cars has been upgrading to make it reliable and effective and ensure the safety of the passengers. Automotive airbag inflators are adopting flexible vent technology, which is a new trend in the industry. Inflation is controlled by a sophisticated air pressure control system that controls the airflow via the vents. With this technology, airbag inflators no longer have to rely on sensors to work. This technology enhances the efficacy and dependability of airbags in protecting the passenger.

The other gas-based implementation and changes in the technological requirements has been through the Inert gas stored under high pressure which is released during operation. This does not generate any heat, which offers advantageous possibilities especially for the design of gas distribution ducts and fabrics in the module. Through its modular construction, the Cool Inflator® offers almost unlimited possibilities for gas expulsion and airbag connection configurations. The standard applications described below are configured to offer

As soon as the bag is filled with gas, the inflator inflates it within 0.002 seconds. They involve storing inflating material and responding to the signal provided by sensors by pumping gas into the airbag during an accident or collision. When a collision occurs, a signal is transmitted to the airbag control unit’s inflator unit. The igniter starts a chemical process that produces nitrogen gas, which is used to inflate the airbags.

Joyson Safety Systems has been part of the major developments within the inflator technologies for better propelled requirements being placed in the market for automotive safety. It has placed itself into innovation with the latest hybrid-based technologies being integrated within automobiles. Hybrid inflators generate gas by a combustion of a propellant and releasing gas stored in a pressure vessel combining both technologies, pyrotechnic and stored gas inflators. Hybrid inflators are mainly used for passenger and head side airbags. It has recently brought in the ADAS based inflation requirements into the market.

For autonomous cars with flexible interior seating, we are able to provide optimal safety with individual restraint solutions. The embrace bag concept allows flexible seating through two inflated bags which connect to each other dynamically through an adhesive surface. These two cushions embrace the head and upper body, protecting the passenger when needed most – while allowing for a greater degree of freedom at the same time.

ZF has  been involved in innovation towards complete automotive safety dependence on the airbag operations through the inflators. The rear-facing side of the front seats is equipped with an innovative rear airbag design to assist protect back seat occupants. Because of this, a front seat’s backrest and rear passengers might be separated by different distances. To compensate for these differences in distance, the distinctive form of the ZF rear airbag idea may be adjusted. Airbags in the back seat assist prevent large pressure loads from being placed on the person, which improves rear occupant protection.