In automobile sector the safety of the passengers and the pedestrians should be top priority. With the increase in number of vehicles on road there has been direct influence on the increasing road accidents globally. Auto manufacturers have been focussing on enhancing the overall safety of passengers and drivers. Airbags play a crucial role in bringing down the fatality rate involved in road accidents. 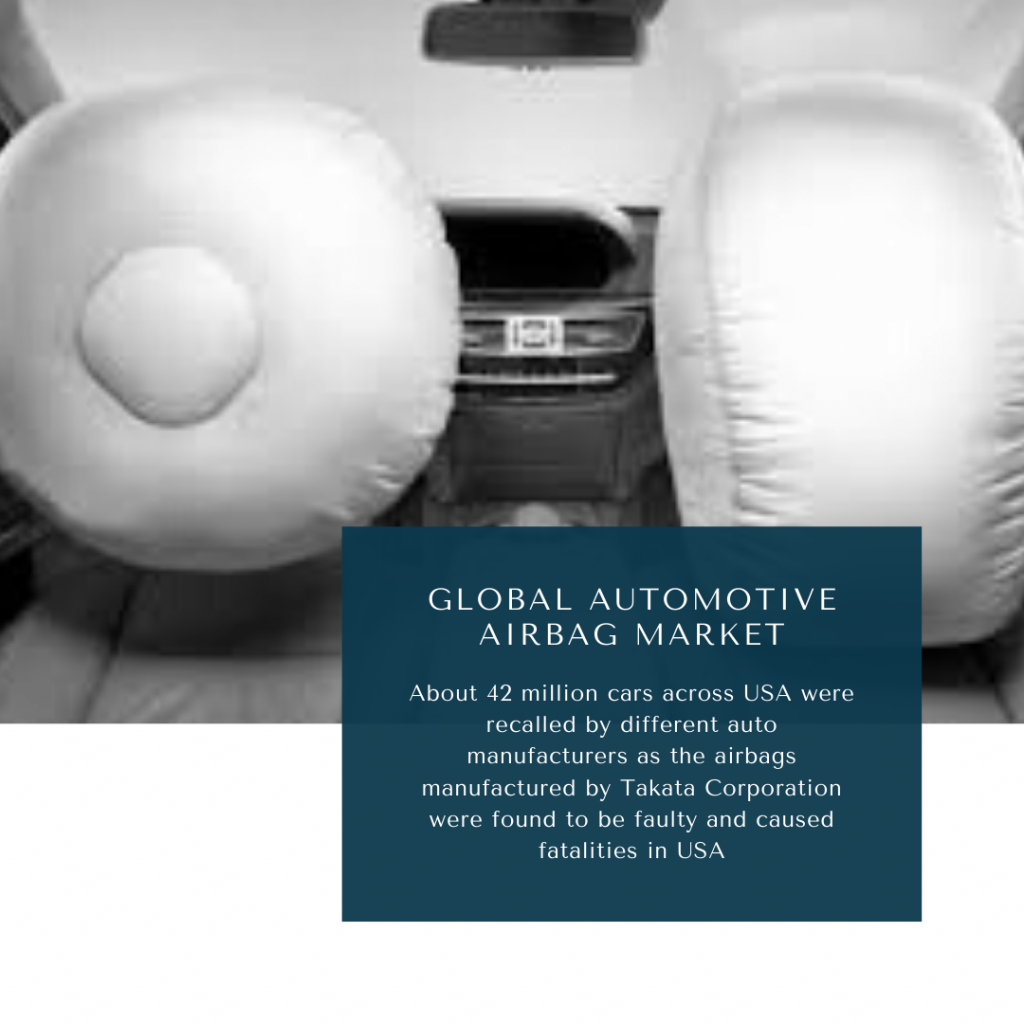 Safety key prospect in auto manufacturing has resulted in rapid growth in the airbag industry. Most of the US, Europe passenger vehicles are equipped with standard 6 airbags. 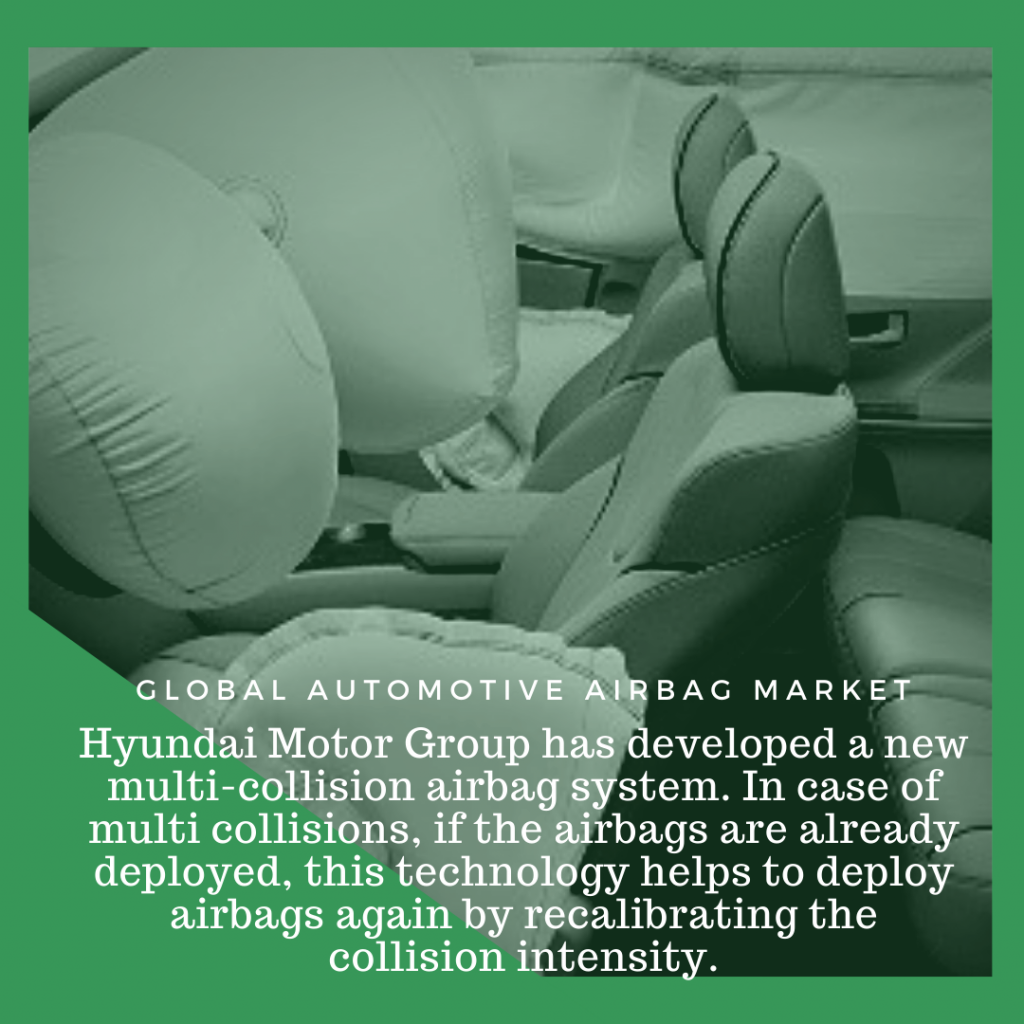 With the regulatory mandate in India where airbags are made mandatory, airbag market is expected to grow substantially.

High energy released when airbags are deployed often cause injuries to passengers. Kids in front seats are prone to airbag injury than adults in the front seat. As the front seat airbag deploy with very high energy.

About 42 million cars across USA were recalled by different auto manufacturers as the airbags manufactured by Takata Corporation were found to be faulty and caused fatalities in USA. The reason was there was explosion when these airbags deployed and inflators without drying agent caused its rupture, sending shrapnel to vehicle interior.

In 1970s auto makers like GM and Ford started incorporating airbags in their passenger vehicles. However due to inferior technology it was not made compulsory. With the advancement in technology and in 1998 new road safety came into effect, where it mentioned to have a mandatory airbags on both the sides of the front seats. Ever since, there has been continuous improvement in technology being used. Any passenger car nowadays comes with standard 6 airbags. The pedestrian airbag is also gaining attention, top selling cars like Chevrolet Silverado is equipped with pedestrian airbag as well. 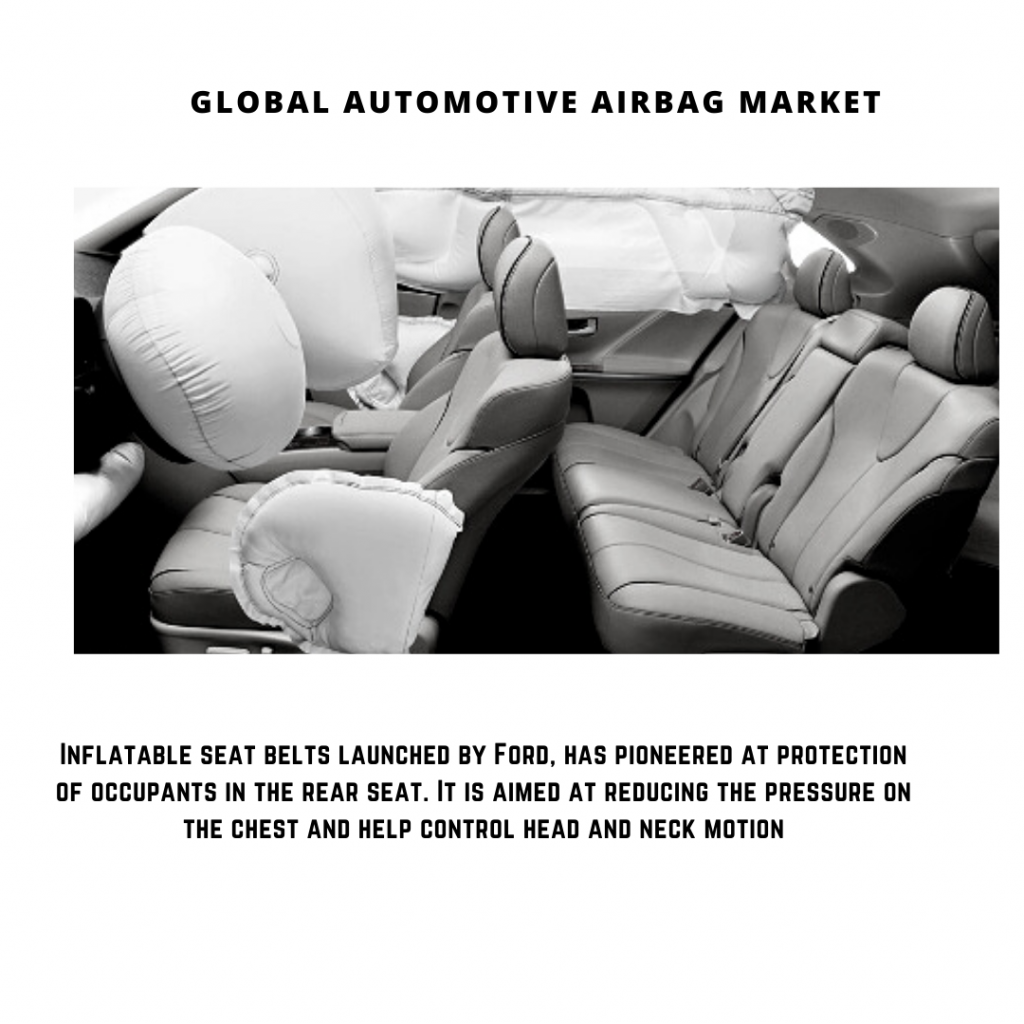 Inflatable seat belts launched by Ford, has pioneered at protection of occupants in the rear seat. It is aimed at reducing the pressure on the chest and help control head and neck motion. Several Ford, Lincoln and Mercedes S class vehicles provide this as optional equipment.

Frontal airbags are voluntarily fitted by auto makers. All top selling passenger vehicles comes in with standard 6 airbags. Autoliv from Sweden and ZF group from Germany are the leading airbag designers and developers. 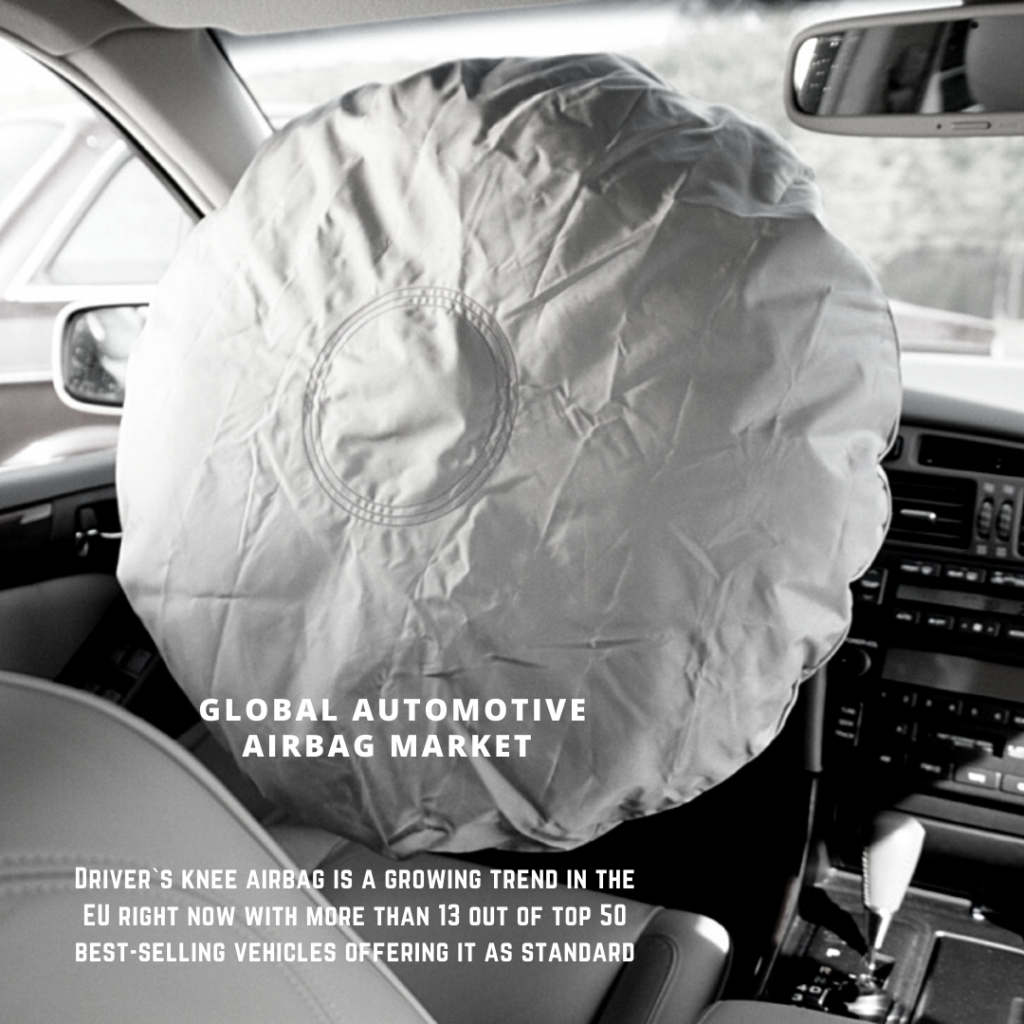 Driver`s knee airbag is a growing trend in the EU right now with more than 13 out of top 50 best-selling vehicles offering it as standard.

Budget brand like Dacia offers Passenger and seat side airbags only on its best- sellers Sandero and Duster. Curtain airbags and driver knee airbags are not even optional.

The Chinese market growth has hit the ceiling but the market continues to grow in terms of features and dollar content of components in the car every year.

The average number of airbags fitted in a mass segment passenger vehicle in  is now 6 as compared to just 2 , 5 years ago.

Like US and EU, Front seat side airbag fitment has grown in past 3 years and is now offered on almost all top-selling vehicles at-least as an option. Driver`s knee airbag is still a niche feature offered by Honda, VW, Mercedes and Volvo only.

All of the top selling passenger vehicles Toyota Prius, Toyota Sienta and Nissan Note come with standard 6 airbags. Toyoda Gosei is one of the top SRS (Supplemental Restraint System) manufacturers in the world.

Market leaders have been continuously working towards better quality airbags and reduce the road accidents. It is estimated that road accidents cause about 1.25 million fatalities in a year globally.

In India, the mandatory regulation was announced in July 2019. According to this all new cars must be equipped with driver side airbag. Although the mandate passed is late compared to other regions, this will boost the airbag market in India. 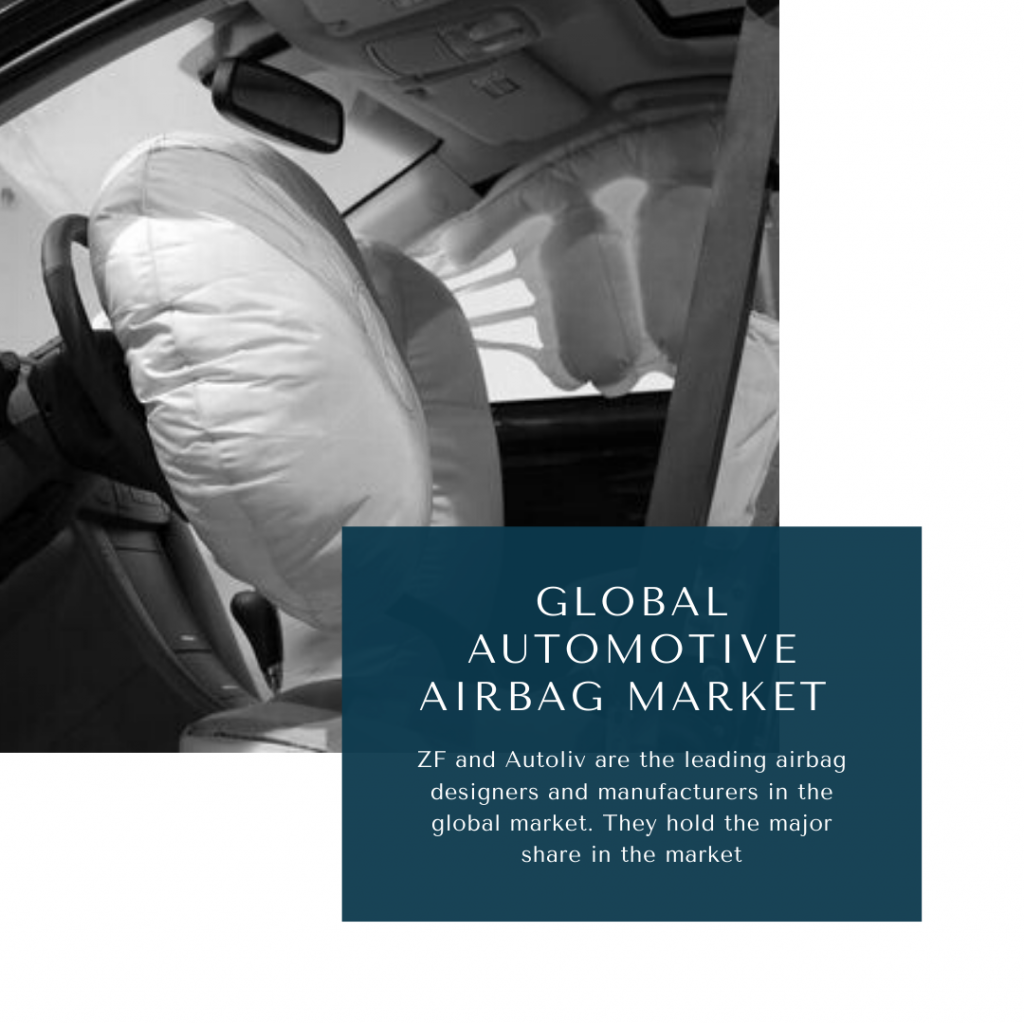 With the increased safety regulations and increased number of standard airbags in a passenger car will increase airbag market considerably.

The global Automotive airbags market size is estimated at $XX Million in 2020, estimated to grow to –% CAGR till 2025.

ZF and Autoliv are the leading airbag designers and manufacturers in the global market. They hold the major share in the market. Japanese company Toyoda Gosei and Joyson Safety Systems from US are the other airbag manufacturers. Some of the companies supplying integral components of an airbag system are: