With the introduction of electric starting motors in automobiles, batteries were widely used. For over fifty years, the automobile industry depended on dynamos to recharge batteries with direct current. The alternator system was already common in heavy-duty industrial applications. However, applying the concept to the technological restrictions of motor vehicles in an era when electrical energy requirements were relatively modest proved too difficult. Converting the alternating power produced by the alternator to the direct current required by the battery was, in fact, a significant challenge. 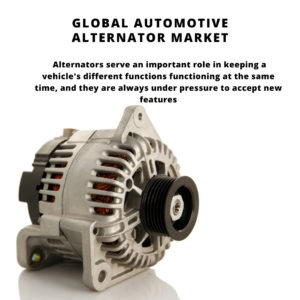 The stronger construction of automotive alternators allows them to use a smaller pulley so as to turn faster than the engine, improving output when the engine is idling. The majority of alternators employ a revolving magnetic field, however linear alternators are used on occasion. In theory, any alternating current electrical generator can be termed an alternator, although the term generally refers to tiny rotating machinery powered by automobile and other internal combustion engines. Alternators in power plants powered by steam turbines are referred to as turbo-alternators.

Alternators are used in contemporary vehicles to charge the battery and power the vehicle’s electric system while the engine is operating. Alternators offer a significant benefit over direct-current generators in that they do not use a commutator, making them simpler, lighter, less expensive, more robust than a DC generator, and the slip rings allow for significantly prolonged brush life.

Developing countries all around the world are taking steps to increase passenger automobile sales. For example, during the transition from BS-IV to BS-VI, India’s finance minister declared that BS-IV passenger automobiles may be registered until March 31, 2020. This has resulted in a modest increase in passenger automobile sales in the country. Because of government-initiated FDI for multinational automotive players, good economic circumstances, and the existence of significant automotive manufacturing sectors, Asia-Pacific is anticipated to have the greatest market for the automotive alternator industry.

The Global Automotive Alternator Market can be segmented into following categories for further analysis.

An alternator is a power generator located within a vehicle that serves as a power source for the electricity utilized in the vehicle, such as the audio or air-conditioning system. Because it relies on the engine’s power to operate, it consumes more gasoline while generating energy. Previously, alternators generated electricity continuously, but this new alternator optimises engine fuel consumption using regenerative control technology, which regenerates power while the vehicle is decelerating and lowers consumption by not generating power at other times.

The increasing trend has been through the development of the New Coolant based technology which has been adopted by Nissan Corporation. When decelerating, the engine runs even without the supply of fuel. Alternators use this energy to generate power and charge batteries. It is called energy regeneration and recovers the unused kinetic energy during deceleration as electrical energy. Using this recovered electrical energy in the navigation and air-conditioning while the engine is consuming fuel means power generation from the engine and fuel consumption can be reduced. Further, regenerating and recovering deceleration energy means charging can be controlled until a vehicle reaches a lower speed. The aim is for a high amount of charge over the longest time possible.

To regulate battery operations, Ford created the power control module (PCM), while BMW introduced the intelligent alternator control (IAC). The PCM monitors the temperature of the engine, battery, and overall electric demand, and charges the battery to supply the needed power, whereas the IAC is used to create enough electricity to power the onboard electronic components of a car during braking and overrun conditions. Stringent fuel efficiency and pollution requirements are driving original equipment manufacturers (OEMs) to update their cars with 48V electric architecture. The improved 48V hybrid systems include hybrid powertrains and battery control systems.

Its purpose is to transform electrical energy into mechanical energy. Alternators serve an important role in keeping a vehicle’s different functions functioning at the same time, and they are always under pressure to accept new features. Producers must stay abreast of the rising technology and intelligence in automobiles in order to maintain their position as alternator manufacturers.

Robert Bosch has been part of development for high technology alternators that are focused on provisioning specific key automotive functions in the market model of operation. It has focused itself on the Commercial Automotive segment of the market. Bosch has developed a series of superior Long-Haul alternators exclusively for the American heavy-duty market. These alternators have been specially engineered, employing cutting edge technology. The have high temperature resistance to supply more power for critical electrical systems which also includes the operability of advanced performance technology that delivers more power and greater efficiency than competitive alternators helps to maximize battery life by reducing battery deep cycling.

Denso Corporation is pioneering in the alternator market considering their high quality and standards of operability. The alternators are focused on provisioning better factors of establishment which include light weight, high efficiency, and durability under the most gruelling conditions that make them operable under harsh conditions. The Rotor slip rings are buffed to an 8-micron surface finish, with run out limited to 20 microns, minimizing brush wear and abrasion. Bearings are validated to OE standards and loaded with premium OE-standard  lubricants. They are offered in versions from 40 to 160 amperes and beyond for hundreds of specific vehicle applications, all alternators meet DENSO’s rigorous First Time Fit standards.