The catalytic converters (catalysts) play a crucial role in exhaust system of vehicles by controlling the HC, CO and NOx gases. The need to attain cleaner environment and strict regulations in every region has propelled the market. These catalysts are mostly made of Palladium, Platinum and Rhodium which increases the final price of the product.

By Type of Engine

The Gasoline Direct Injection engines are ruling the market and the rapid increase of this number has led to development of advanced after treatment systems to counter the NOx emissions from these engines.

In 2020, sales volume for mobile emission catalysts saw a jump whereas, volumes declined for chemical catalysts and refining catalysts in particular

The increase in catalyst sales globally in 2020 was primarily attributable to higher precious metal prices. BASF’s catalyst segment made about $ 16B sales in 2020, about 44% increase Y-o-Y.

BASF’s FWC+ Catalyst (Four Way Conversion) technology was initially introduced to the Chinese passenger car market in 2019 before being launched in Europe in 2020. It is estimated that it has potential of potential of annual sales of more than €20 million from 2022 onward.

After first half of 2020, Johnson Matthey’s global LDV (Light Duty Vehicle) Catalyst sales declined by 23%, largely driven by Europe and the Americas due to COVID-19 and associated customer shutdowns. Asia’s sales except for China remained flat and in China the sales went up as the year progressed and was also supported by government.

Johnson Matthey’s HDD (Heavy Duty Diesel) Catalyst sales went down by 33%. However, in China & India company was benefited from a significant uplift in value per truck due to tightening legislation. America region being the company’s largest HDD market witnessed a drop in sales of 48% Y-o-Y.

Sales declined primarily due to weaker demand as a result of COVID-19 and the usual cyclicality of methanol and ammonia catalyst refills in Catalyst Technologies. This resulted in growth pf PGM Services which benefited from higher and more volatile average PGM prices.

Umicore’s revenues suffered much less than the global car market, due to strong market position in gasoline technologies for light-duty vehicles, particularly in China and Europe. Revenues were further supported by higher sales of Umicore’s catalysts for heavy-duty diesel applications and fuel cells catalysts.

DOC for diesel engines and three way catalysts in case of gasoline engines are the leading technologies in the automotive catalysts range. The efficiency of these catalysts to control HC, CO and Particulate Matter (PM) makes them most commonly used ones. In addition to this Lean NOx Traps (LNT) has witnessed a rise in installation of these to control NOx emissions due to stringent regulations worldwide.

The three way catalysts along with the NOx traps are the most frequently found catalytic technology in the diesel engines.

BY TYPE OF ENGINE

The diesel powered engines contribute higher to the catalyst market due to its higher emission rate. This has led to development of more number of catalyst technologies for diesel engines. The diesel powered engines require larger Palladium Group Metals (PGM) to convert the exhaust gases into less toxic gases. Since the PGMs are expensive it increases the price of the catalysts. 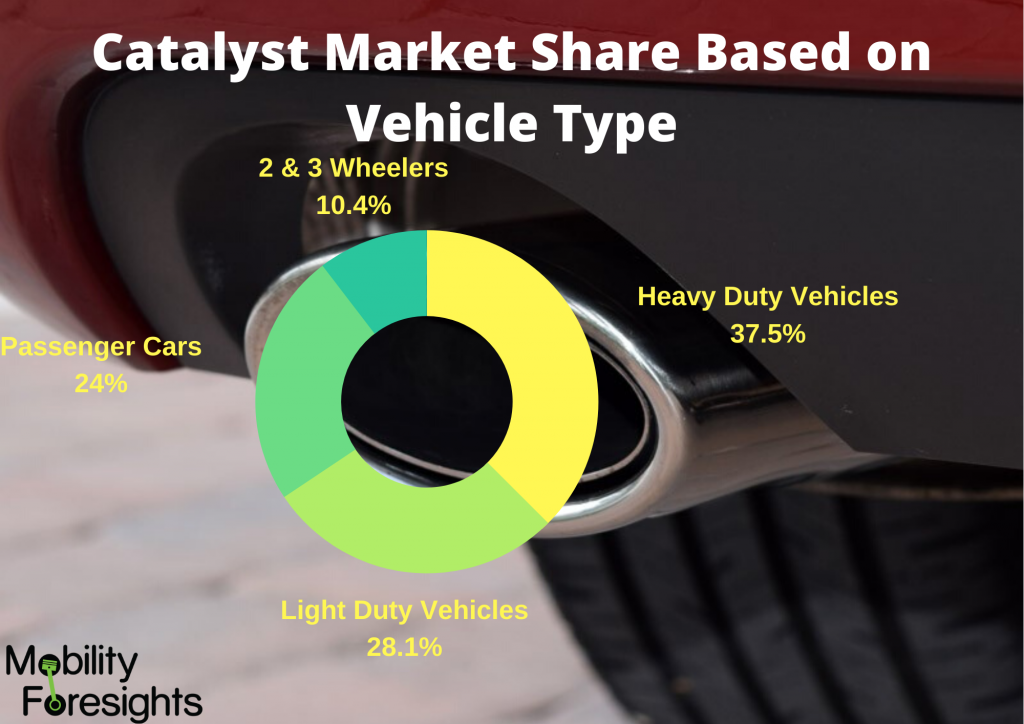 The California’s goal to achieve 90% reduction i.e. 0.02 g/bhp-hr of NOx emissions of a heavy duty vehicle in the state and across the country by 2027 will be the turning point in the market.

SCR was made mandatory for all the diesel vehicles above 2L engine which has increased the SCR demand in the region. The upcoming Euro 6d emission standards are expected to stringent the rules further and thus propelling the catalyst and overall exhaust market.

Due to the ongoing pandemic China has delayed the implementation of particulate number limits till January 2021 and allowed the sales of China V standard cars. The China 6 standards will be implemented in 2 stages 6a and 6b 6 months apart. The 6b being stringent regulations, the automakers are now able to time tweak to be launched vehicle to the emission standards.

BASF by investing 34 million Euros on the Catalysis R&D center in Shanghai has enhanced the regional innovation capabilities. The first production facilities are scheduled for completion in 2022

The changes in emission standards such as reduced sulphur content from diesel vehicles, reduced NOx emission limits for all classes of vehicles after implementation Bharath Stage-VI will boost the diesel catalytic technologies immensely.

There have been continuous efforts by the manufacturers to develop an alternative material to reduce the cost of the catalytic production. Currently there is 3 times more demand for palladium than platinum in automotive industry. To balance the structural deficit in the palladium market platinum is being used to develop these catalysts.