As of Dec 2019, the auto industry is battling multiple headwinds like declining sales globally and especially in China, reduced margins for suppliers, job cuts and lower capital expenditure.

Almost all OEMs and suppliers have scaled down their revenue and profitability guidance for 2019.Both are looking extensively at e-mobility and shared mobility and the internal combustion engine is not getting the amount focus it used to, 5 years ago. 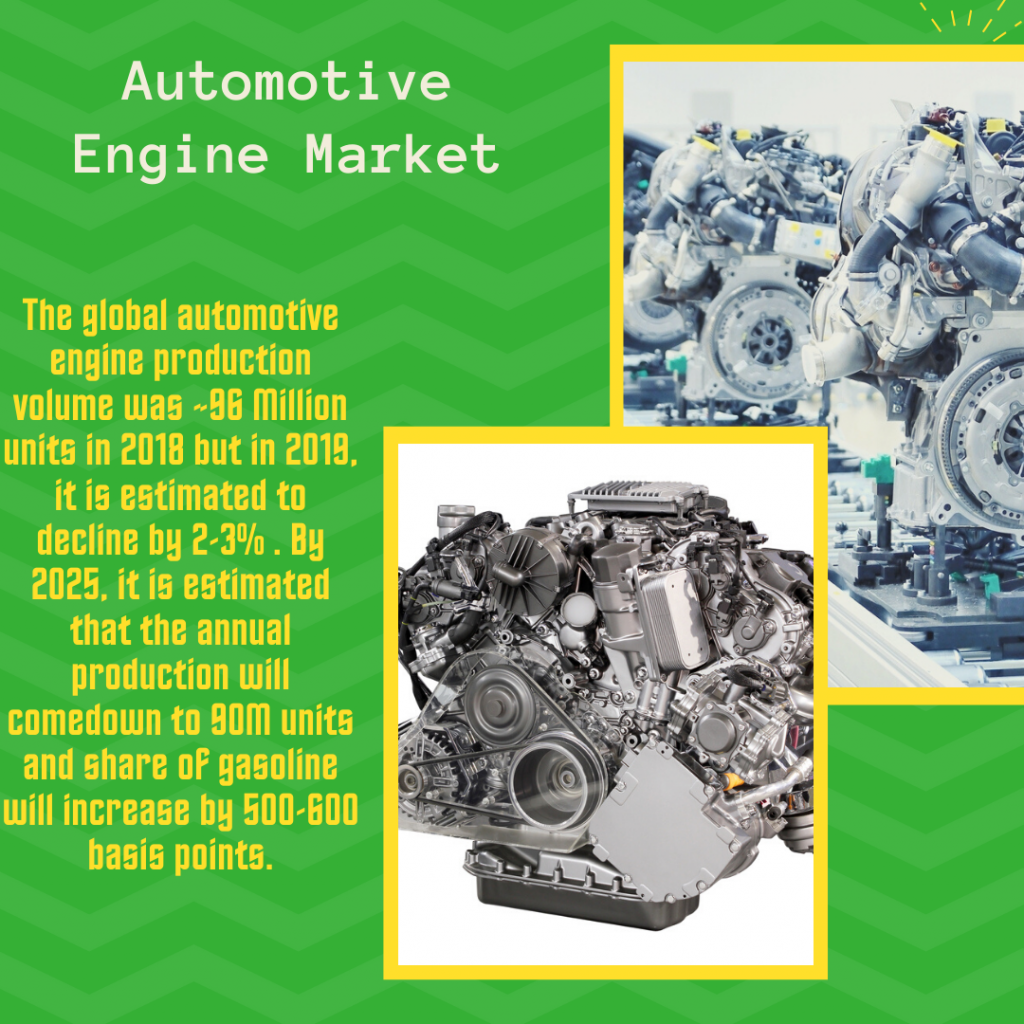 The global engine downsizing trend is done and dusted, the automotive engine will now play second fiddle to electric mobility.

Many mechanical components like oil pump, coolant pump, HVAC compressor will be electrified and thus the sub-component suppliers need to align themselves with this global vehicle electrification trend to stay relevant.

INTEGRATION OF ISG IN AUTOMOTIVE ENGINES

In Europe, now almost all engines are now coupled to either a 12 V BSG or a 48V ISG to improve city driving emissions. In recently unveiled Ford Puma, the ISG enabled Ford engineers to lower the engine’s compression ratio and addition of a larger turbocharger for more power. 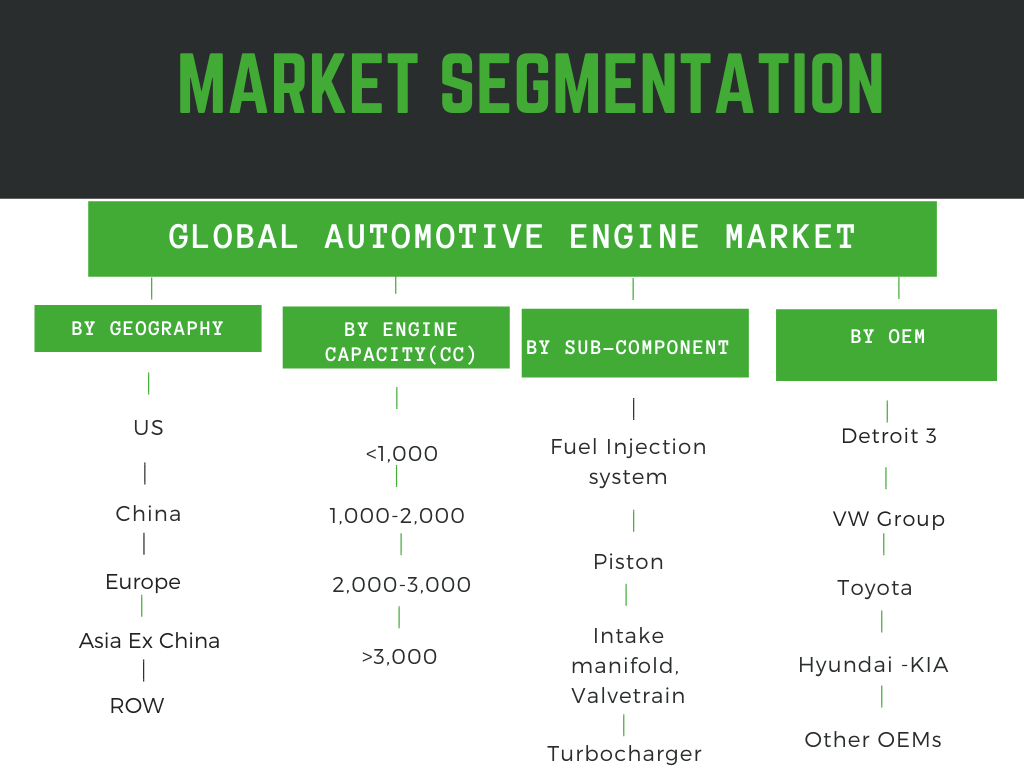 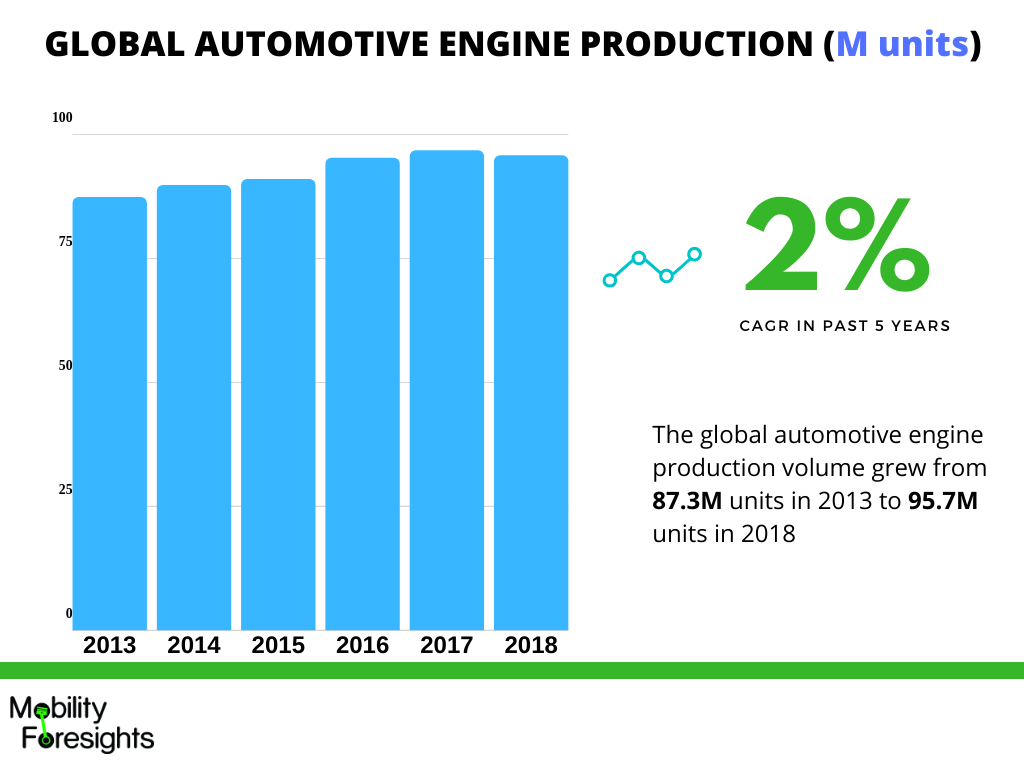 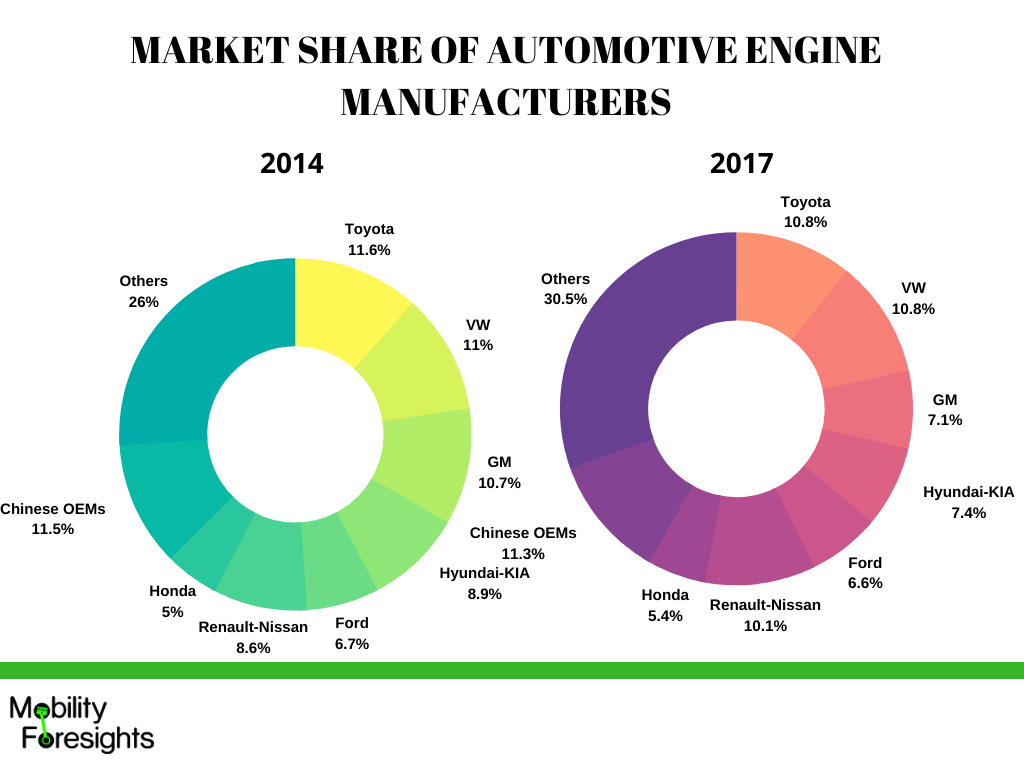 During 2014-2017,the market share of automotive engine manufacturers has remained almost same for top 2 players but it has declined for General Motors and Hyundai-KIA. Renault-Nissan alliance and Honda have been able to increase their share from 8.6% to 10.1% and 5% to 5.4% respectively.

Europe is the biggest market for Passenger car Diesel engines, approx 48-50% of new cars sold in Europe were Diesel before VW scandal erupted in 2015. As of Dec 2019, Diesel share has now stabilized to 33% and is expected to remain in ~25-30%(~4 Million units per annum) range till 2025. In the light of upcoming 2021 95gm/km CO2 emissions rule, Diesel has an important role in bringing down emissions for larger SUVs, 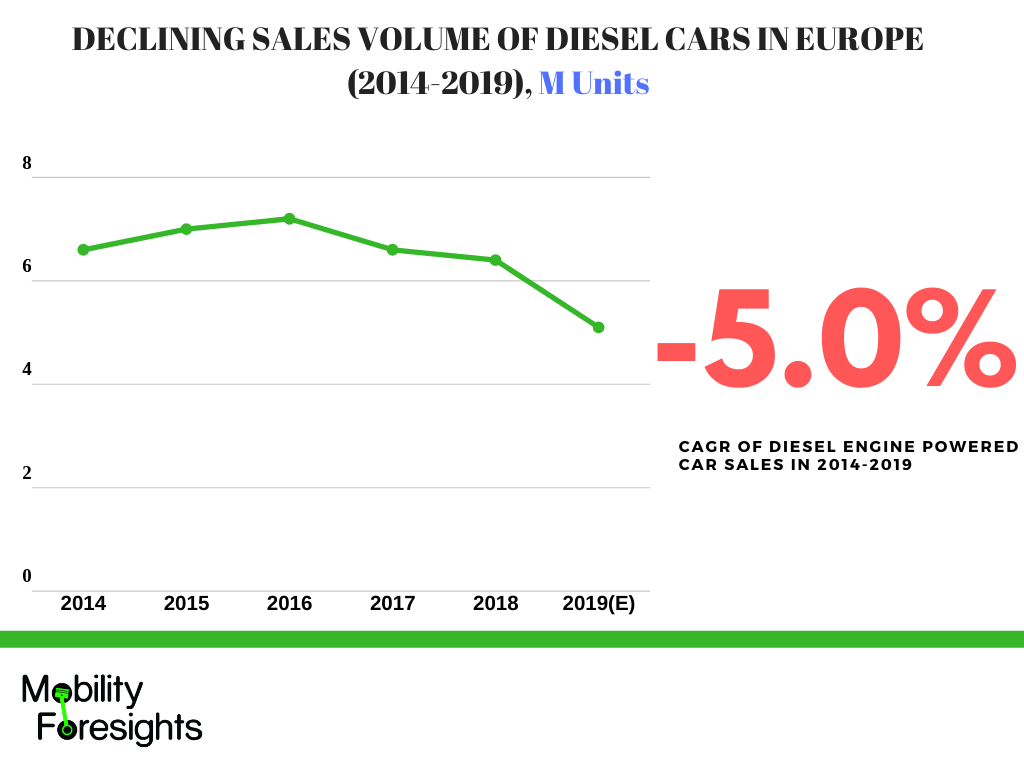 Due to much stricter norms now in place, VW now has a new twin dosing SCR system which includes dual AdBlue injection to significantly reduce NOx emissions. VW introduced a 1.6L TDI on its top-selling T-Cross to offer more flexibility to it`s consumers in June 2019

In coming years, even bigger challenges are about to come as CO2 rules will get even tougher for European OEMs. The new European Commission plans to propose revising legislation on CO2 emissions standards for cars and vans to move towards 2025 onward toward zero-emissions mobility from 2025.

India, which is the second biggest market for Diesel passenger cars after Europe, is battling numerous challenges including upcoming BS6(Euro Vi  equivalent) norms. Passenger car sales are down 13%(YOY) in Jan-Oct 2019 and Diesel share is now down to 33%(1 Million units per annum) compared to 55% in 2013.

With Diesel`s share shrinking, gasoline engine is now now the prime focus for further improvement. Going forward, we can expect the integration of Atkinson and Miller cycle engines + GDI( Gasoline Direct Injection) + VGT(Variable Geometry turbo) on a much bigger scale.

For example, in Jan 2020, Seat  launched its all new Leon with  two 1.0-litre units as well as the 1.5 TSI 96kW/130PS with a Miller-cycle combustion process and variable geometry turbocharger to improve efficiency by 10%. Delphi has already introduced 500 bar GDI system which could reduce PM emission by as much as 50% is more likely to be adopted by OEMs for higher segment vehicles.

The 3L and higher capacity gasoline engines will continue the way they are in North America but in Europe they will be either coupled with a PHEV or Mild hybrid technology to reduce emission.

Toyota– World`s second biggest producer of auto engines after VW group in 2019 had highest share(~52%) of electrified vehicles globally, and 100% of them are powered by gasoline engines. VW still believs CNG could play a much bigger role in transition to low emission vehicles and thus equippped  its natural gas models of the Polo TGI and Golf TGI with a third natural gas tank to offer a cumulative range of more than 400 Kms in WLTP cycle.

India is now a very important CNG car market and as per Maruti Suzuki( market leader with ~51% market share), about 7% of its new cars sold per annum are now dual fuel( Petrol + CNG) powered.

KEY CONTENTS OF THE REPORT INCLUDE