The fuel injection systems in vehicles has undergone constant minor changes in a quest to enhance the power output, smooth run of engines, the mileage of the vehicle and also mainly to achieve higher percentage of fuel combustion so as to reduce the emission of greenhouse gases.

The increased trend of downsizing the engines in passenger cars has led to development of the latest fuel injection systems.

The Asia-Pacific region is estimated to be the dominant consumer of the automotive market due to the increasing demand for vehicles in countries like China and India.

Delphi’s 350 bar GDi (Gasoline Direct injection) is capable of reducing the particulates by 70%. It also improves the performance by providing higher output. This prompted Bosch and Magneti Marelli who developed the 350 bar GDi for high performance cars.

AUTOMOTIVE FUEL INJECTION MARKET BASED ON THE COMPONENTS

The fuel injectors which carry the fuel at high pressure in droplets form is a key component in the system. The fuel pumps too help in increasing the fuel efficiency by sending high pressure fuel and at high flow rate.

The electrification of the system meant the ECU and sensors are witnessing the high demand. The ECU optimises the fuel injection amount; it controls the injectors independently in order to increase the injection accuracy. The sensors used are the Air/Fuel (A/F) ratio sensors, fuel pressure sensor and crankshaft position sensors.

The MPFI technology although are still found in few variants of the car models, this system has high penetration in the two wheelers. The MPFI has become pattern in most of the motorcycles.

The below chart shows the market share of different injectors: 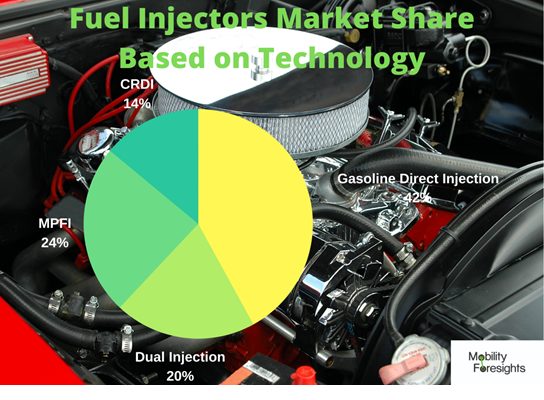 Toyota has pioneered the dual injection engines wherein both the port and direct injection are engines are incorporated; this enhances the power of the vehicle. These engines when running at low rpm and during starting fuel is injected by both the injectors and when the engine is runs at high rpm direct injectors handle the fuel delivery.

Direct ignition system is mostly found in the top selling cars. However the Ford F150 and Toyota Rav4 come with the dual Injection system. Ford in US holds the highest share in dual ignition system and has installed is most of its models. The average size of the engine in US is 2.5L and hence it requires a high pressure injector which helps in clean combustion and reduces the exhaust gases.

Ever since Euro 6 and subsequent standards came into effect the emphasis on the GDi has been witnessed. The direct injection is incorporated in every top selling car in the region. The European engines are smaller of average 1.5L and downsizing is the reason for this.

China has the highest share of gasoline engines and has almost eliminated the diesel engines among passenger cars. This has led to increased use of GDi in high performance cars such as Haval H6 and Toyota Corolla. However, some of the other top selling cars Lavida, Sylphy are running with MPFI engines.

The implementation of BS-VI has resulted in major changes in the injection system in 2 wheelers in the region. The latest norm has made the electronic fuel injection mandatory and thus increasing the fuel injection penetration among 2 wheelers. The presence of highest number of 2 wheelers has boosted the MPFi segment.

The global automotive market for fuel injector systems is estimated to grow by $XX billion during the years 2021 and 2026 which will progress with a CAGR of XX% during this period. This growth is owed to the increase in vehicle production, demand for better efficiency and fuel output as well as stringent exhaust emission norms.

Delphi Automotive has developed a 500+ bar GDi which is capable of reducing the particulate emission by 50% and 1 % reduction in fuel consumption compared to the current existing 350 bar GDi. The 500+ bar GDi is expected to be equipped with the 2022-2023 car models.

The global fuel injector market for the automotive industry was estimated to grow in the years 2020 to 2024 by $XX Million. However, due to the COVID-19 pandemic there was significant decrease in the demand as well as development and manufacture following the subsequent quarters.

The Asia-Pacific region is expected to show an increase in the demand of vehicles which will positively impact the recovery of this sector which has been disrupted due to the lockdowns in place. The supply chain system globally has been hit as countries across the globe restricted operations in order to minimise the infection rate. However, with the relaxation in lockdown many different sectors have started to recover and the fuel injector market is also estimated to recover fairly smoothly. With the key players like Denso reporting a consolidated net sales of $44.6 billion by the end of March 2021, the market is likely to recover.

Some of the market leaders in the fuel injection segment are Delphi (UK), Continental (Germany) and Bosch (Germany).

The company Cummins Inc. has signed a letter of intent in the month of JUne 2021 with Rush Enterprises to acquire 50% equity interest in the Fuel Momentum Technologies developed by Rush Enterprises. It provides the first of kind complete compressed natural gas fuel system for class 6-8 vehicles.

As of October 2020, BorgWarner Inc. announced the acquisition of Delphi Technologies at a whopping $3.3 billion deal. The deal is estimated to enhance the capabilities and scale of BorgWarner, making it a leader in electrified propulsion systems.