Automotive lighting occupies a major chunk of share in the automotive design segment and the headlights are the leading lighting sector by position. The laser headlights are capable of illuminating at higher intensity than any other form of automotive lights and also are proved to be able to increase the range of vision by 6 times than the next popular lighting i.e. LEDs. The increased concern towards safety has led to the shift of automotive industry towards the laser lights.

The increase accidents on roads particularly on highways around the world have prompted the governments to take action to improve the headlight technology. Several automakers have started patenting the design and technology of the laser headlights.

Laser sourced headlights introduced in BMW i8 is having higher luminosity of all the other technologies. It provides higher range of visibility than LEDs. Audi in its R8 LMX used 4 laser diodes per headlight.

As of now Laser powered headlights are mostly found in the sports and luxury segment cars. Due to their pricing their application is restricted.

The below figure shows the headlights market share among passenger cars: 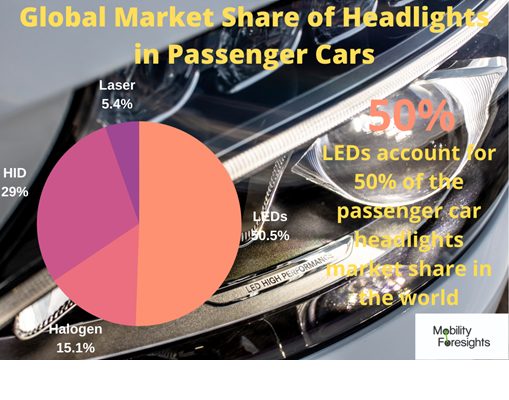 Laser diodes the light emitting source is crucial and are the largest revenue attracting component. The arrangement of these diodes varies with respect to the auto manufacturer and it also varies in the number of diodes used. For instance BMW uses 3 laser diodes where 2 are at same level and 1 below them bisecting the 2. The mirrors are placed to reflect the light on to the lens. The blue light coming out of diodes are when made to fall on the phosphorous lens, the resulting light is incoherent and white in nature. The white light falls on projector so as to direct the light on to the road.

NHTSA (National Highway Traffic Safety Administration) in 2018 has approved for adoption of advanced lighting in the passenger cars. Late 2019 models of BMW M5 and Audi A8 came with the laser lights however they were integrated with the existing LED lights and were allowed to operate on the high beams. Since the NHTSA has not fully approved the headlights the laser lights are not independently present in the US headlight market.

The market is currently offering only some of the luxury car models with laser light technologies such as the BMW i8, the new BMW 7 series and the Audi R8 LMX. On one hand BMW and Audi are fixated on the development and advancement in the laser light sector, Mercedes on the other hand opts for high powered LEDs which are installed in all of their models. With SLD launching its new laser system which will soon be launched in the US in BMW M5.

The company SLD Laser has announced the launch of its “safe for human eye” laser light headlamp for the automotive industry. They will be launching it first with the BMW M5 series in Europe.

In Europe currently BMW holds the highest share in the laser light market and has 5 models across i, 7 series and X series models. Audi has R8 model on road featuring laser lights.

In China the premium cars such as BMW X5, X7 and 7-series and Audi A8L feature the laser headlights. While it is standard in BMW X 5 models, it is a option in other models of BMW and Audi.

The laser light focussed mainly in headlights position right now in the market is expected to widen its presence in the cars. The developments are made to incorporate the laser lights in the rear-view mirrors by SLD Laser.

The automotive laser light industry is estimated to go beyond the $XX Billion range by the year 2030 growing at a rate of CAGR XX%. In order to make the light safe for vehicle operation, these laser lights are subjected to several testing procedures each by component as well as by OEMs.

OSRAM, the Germany based lightning group reported a 30% drop in the sales over the third quarter of the fiscal year 2019-2020. The company, due to the COVID-19 pandemic, recorded a plunge in revenue by 29.4% falling to EUR 606 million by June 2020. The drop was due to the restrictions in place for the COVID-19 pandemic which affected most of the sectors negatively.

Companies in this sector are introducing innovative HD headlight systems, these are gaining traction over the emerging market players in the luxury car market. The sector is estimated to reach a production capacity of approximately 34,500 units by the end of 2030.

Osram (Germany) were the pioneers in laser lighting technology. BMW i8 and Audi R8 the first cars were equipped with Osram’s equipment. SLD Laser California based company has penetrated the market by manufacturing laser lights for BMW’s M5. Hella (Germany) the leading automotive lighting company has developed a HD matrix LED lamp with laser high beams for Audi A8 models.

The companies in this sector compete with each other through innovations and advancement in technology that also facilitate the growth of this sector. For Instance, the company SLD Laser, focused on commercialising next generation laser light sources is gaining recognition across the globe due to its cofounder who invented a filter called phosphor specialised to deploy as safe for human lights.

Japanese ceramics and electronics manufacturer Kyocera acquired SLD Lasers with 100% ownership as of January 2021. The Kyocera SLD Laser Inc. (KSLD) announced the launch in production of the world’s first of kind dual-emission white light and IR laser light source for the automotive as well as consumer lighting and night light illuminating sector.

HELLA signed a strategic agreement with Wuling Automotive industry belonging to the Chinese Guangxi Automotive group to work together on developing automobile lighting technologies to be introduced in the chinese market.

Several organisations are also investing in the R&D department of this sector. An organisation, New Car Assessment Program (NCAP) has invested to develop and design automobiles incorporating various safety features such as laser headlight as well as night vision camera, these tactics are likely to complement the growth of this market.