LIDAR – also called laser scanners or laser radar is a sensing method that detects objects and maps their distances. The technology works by illuminating a target with an optical pulse and measuring the characteristics of the reflected return signal. This pulse width varies from few nanoseconds to microseconds. 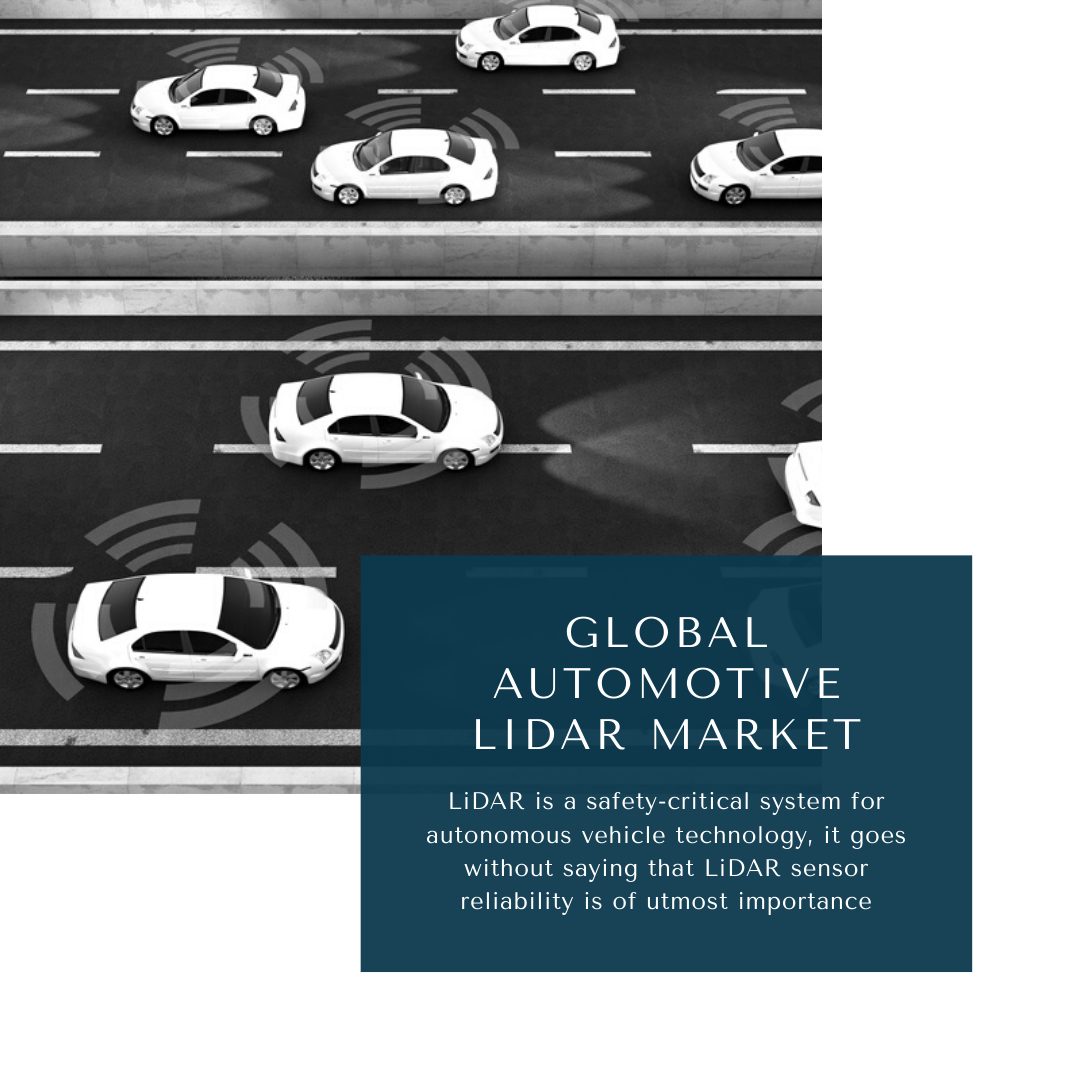 Highly or fully autonomous vehicles usually use multiple sensor technologies to create an accurate long- and short-range map of a vehicle’s surroundings. LIDAR and radar share a broad array of common features that can map surroundings as well as measure moving object’s speed.

Mechanical Lidar- Mechanical Lidars are the type of lidars that uses high-grade optics and a rotating assembly to create typically 360-degree field of view. These use powerful, collimated lasers that concentrate the return signal on the detector through highly focused optics. 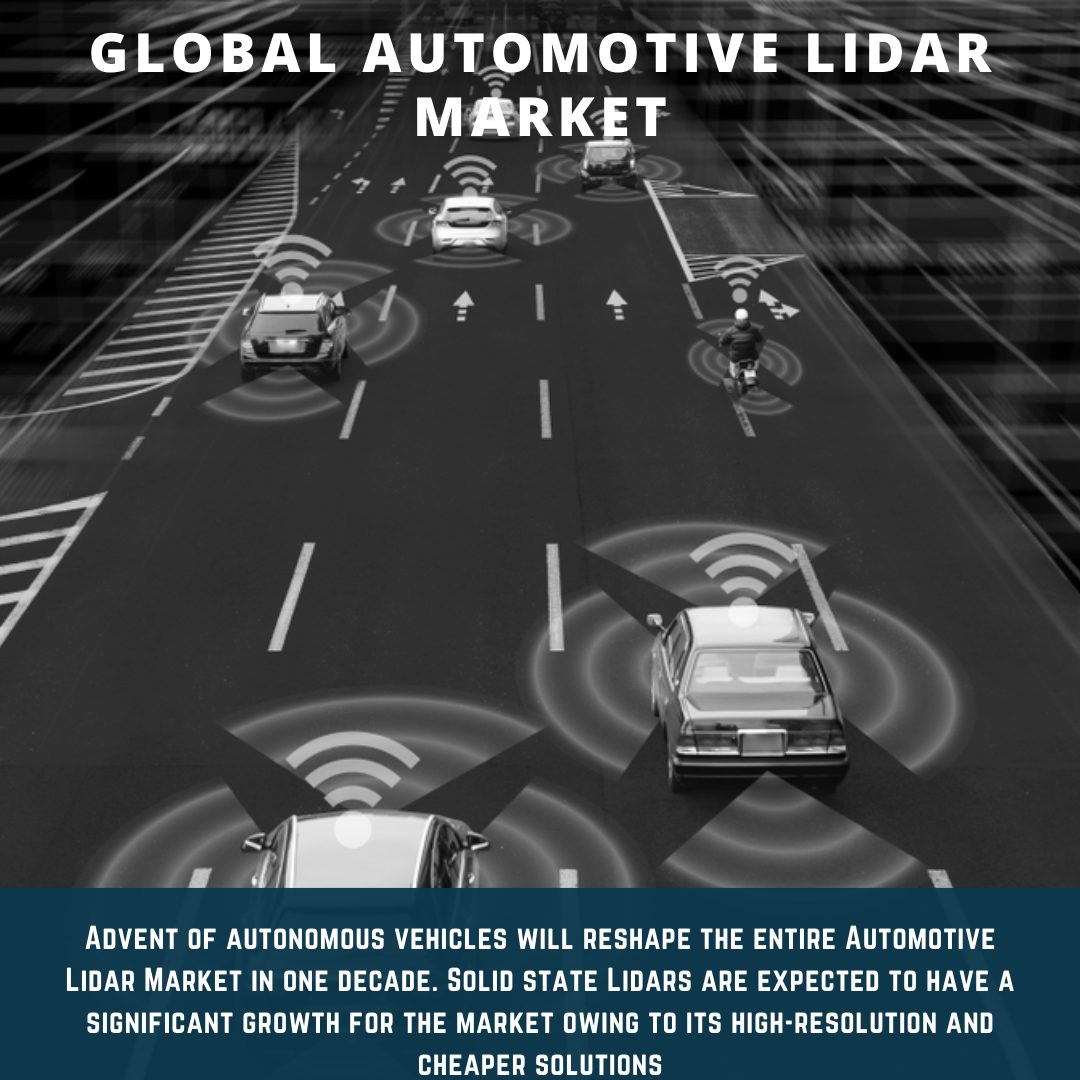 Solid State Lidar- These lidars have no spinning mechanical components and usually have reduced field of view; thus, it is cheaper. Using multiple channels at the front, rear and sides of a vehicle and fusing their data creates a field of view that rivals mechanical LIDAR.

Flash Lidar- The operation of these lidars are very similar to that of a standard digital camera using an optical flash. Since this method captures the entire scene in a single image compared to the mechanical laser scanning method, the data capture rate is much faster

The automotive industry is making efforts towards the development of autonomous and semi-autonomous vehicles, as a result of which the LiDAR technology is estimated to witness a surge in the demand in the coming years. The leading players in the market such as Scania, Daimler, Volvo, Volkswagen, General Motors, Waymo and many more are planning to launch autonomous and semi-autonomous vehicles. The companies in the LiDAR market have been focusing their developmental works on the LiDAR sensors of the next-generation with continuous wave frequency modulation technologies (CWFM) to determine the velocity as well as the distance of the target.

The growth of the LiDAR based systems is primarily based on the increase in applications such as adaptation of LiDAR in UAVs, in engineering and constructional applications, in geographical information systems (GIS) with the emergence of 4D LiDARs and even the regulations for use of commercial drones are decreasing, these are the fuels powering the market.

Since LiDAR is a safety-critical system for autonomous vehicle technology, it goes without saying that LiDAR sensor reliability is of utmost importance. US automotive LiDAR market dominated the global market in 2020 and is anticipated to maintain its leading position during the forecast period.

The Automotive Lidar market in Europe is expected to be the fastest growing regional market during the forecast period.

Lidar Modules and sensor fusions will account for the lion’s share of semiconductor that goes into ADAS equipped cars.

Due to the novel coronavirus pandemic countries across the globe following the directives of WHO are imposing lockdowns and trade restrictions in order to minimise infections. As a result of which the exports of automotive components and parts have been disrupted primarily from China, large manufacturing units across Europe and the electronic plants based in the US. The reduction in the production of automobiles due to these reasons has impacted the demand for LiDAR sensors negatively in the automotive sector.

However, the Covid-19 pandemic is estimated to have an indirect impact on the market. Autonomous and semi-autonomous cars and other vehicles market is predicted to be on the rise in the future because of new evolving technologies and increased focus on clean energy initiatives.

To realise the importance of driverless and contactless delivery in attempts to control the infection rates, many grocery, food delivery and logistics companies have started to adopt delivery by autonomous vehicles which make use of LiDAR sensors extensively.

The plunge in the market can also be seen due to the decrease in production of electronic components and integrated circuits. This decrease can be attributed due to the restrictions in the manufacturing units and trade restrictions.

Advent of autonomous vehicles will reshape the entire Automotive Lidar Market in one decade. Solid state Lidars are expected to have a significant growth for the market owing to its high-resolution and cheaper solutions.

The focus area of the suppliers is development in incorporating multiple technologies and features into minimal hardware.

The Global Automotive Lidar market is estimated at $XX Million in 2020, growing at –% CAGR till 2026.

The California based startup Quanergy is appointed by PARIFEX as the supplier exclusive for production of long range 3D LiDAR for the speed detection on highways as of June 2021. The company’s M-series is selected for the project because of the long range of up to 200 m that it provides.

The superior implementation of LiDAR sensors in various applications has been attracting investments from OEMs across the globe to enable the development and integration in next-generation autonomous vehicles. In July 2020, the Luminar Technologies an automotive LiDAR company received investments worth $100 million by the G2VP LLC, The Westly group as well as the Moore Strategic Ventures LLC, this raised to the total investments of $250 million in the company. With the help of these investments, the company has developed low-cost LiDAR technology for commercial trucks through a new platform – Iris.

In 2020, Hesai Photonics Technology Co. Ltd, a LiDAR technology development company, received an investment worth $173 million as a part of the company’s series C funding round which was led by Bosch GmbH with Lightspeed Ventures LLC, DT Capital partners, ON Semiconductor Corp. as well as Qiming Venture Partners. The investments fueled the growth of LiDAR startups helping in the growth of the market.

As of July 2021, Veoneer Inc. announced a merger agreement with Magna International Inc. Under the agreement Magna International will acquire Veoneer for a value worth $31.25 per share to a total value of $3.8 billion. This will extend Magna’s ADAS business by providing access to new customers and areas including Asia.

The company Veoneer has done well in the second quarter of 2021, with a net sales of $398 million for the three months ending in June 30, which was a whooping 116% increase as compared to the same quarter the company experienced in 2020 during the pandemic. The sales for the year 2020 saw a decline of 28% from $ 1.9B to $ 1.37B. The active safety segment witnessed a minimum drop in sales compared to other segments as it dropped by 12% from $ 708M to $ 624M.

The Lidar industry is dependent on software providers as technology partners for maximum utilization and improvement of the hardware.

LeddarTech is one of the global leaders in providing sensing solutions for autonomous mobility and for driver assistance systems. Moreover, LeddarTech products and solutions are actively deployed in autonomous shuttles, trucks, buses, delivery vehicles, smart cities/factories, and robotaxi applications. California based Quanergy has collaborated with Chinese OEM Geely to develop and commercialize solutions for the broad deployment of smart city and autonomous vehicle systems.

Shacman Trucks in China has selected Innoviz Technologies’ solid-state Lidars which will enable driverless port operations, a step towards autonomous vehicle development in the CV segment.