Rear view mirrors act as one of the critical active safety devices in an automobile. In order to ensure safety manufacturers are focussing on integrating mirrors with the technology to improve the vision to the driver. Increase in stringency of vehicle standards is the main factor driving the market. The introduction of camera in the mirror sector whether it’s assisting or almost replacing the mirror has led to various technological advancements propelling the rear-view mirror sector. By Position of Mounting

The driver and passenger’s safety being primary importance is a major factor boosting the market. Technological advancements in safety features will propel the rear-view mirror market. There is a slow shift from traditional mirrors to the latest technology where in a camera replaces the mirror. The feed is viewed in the cockpit on a screen. However, as of now it is restricted for premium and luxury segment cars.

The exterior type dominates the market and the fact that they are e of them present in a vehicle makes it the most dominant one. And also one major factor helping the exterior to rule the market is that commercial vehicles like trucks don’t feature interior mirrors. 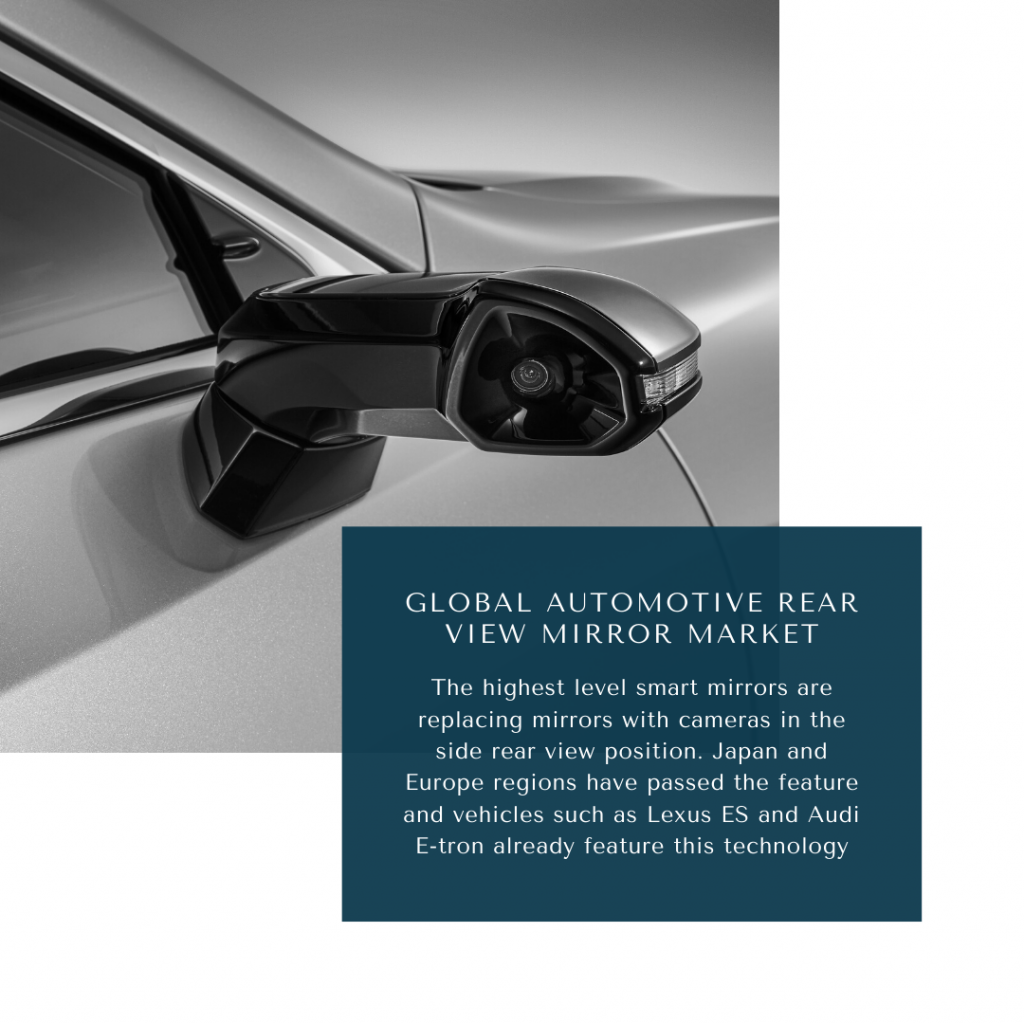 The tow mirrors an extended version of exterior rear mirrors specifically designed for towing trailers vehicles. The pick-up trucks contribute considerably to this segment of mirrors.

The door mounted rear-view mirrors are most commonly used in the vehicles. These are extensively found in the passenger cars. The ease with which they can be replaced or repaired if needed makes them the most in demand segment.

The body mounted mirrors’ segment is dominated by the commercial vehicles. These mirrors are extended a lot in order of clear visibility for the driver.

The conventional mirror holds the higher share in the market. The entry level (budget) cars and more importantly the commercial vehicles dominate this segment of mirrors.

The smart mirror market is fastest growing type. These smart mirrors feature multiple functions such as auto dimming, heating function and electric control. These are available in mid segment and SUVs in most of the regions. 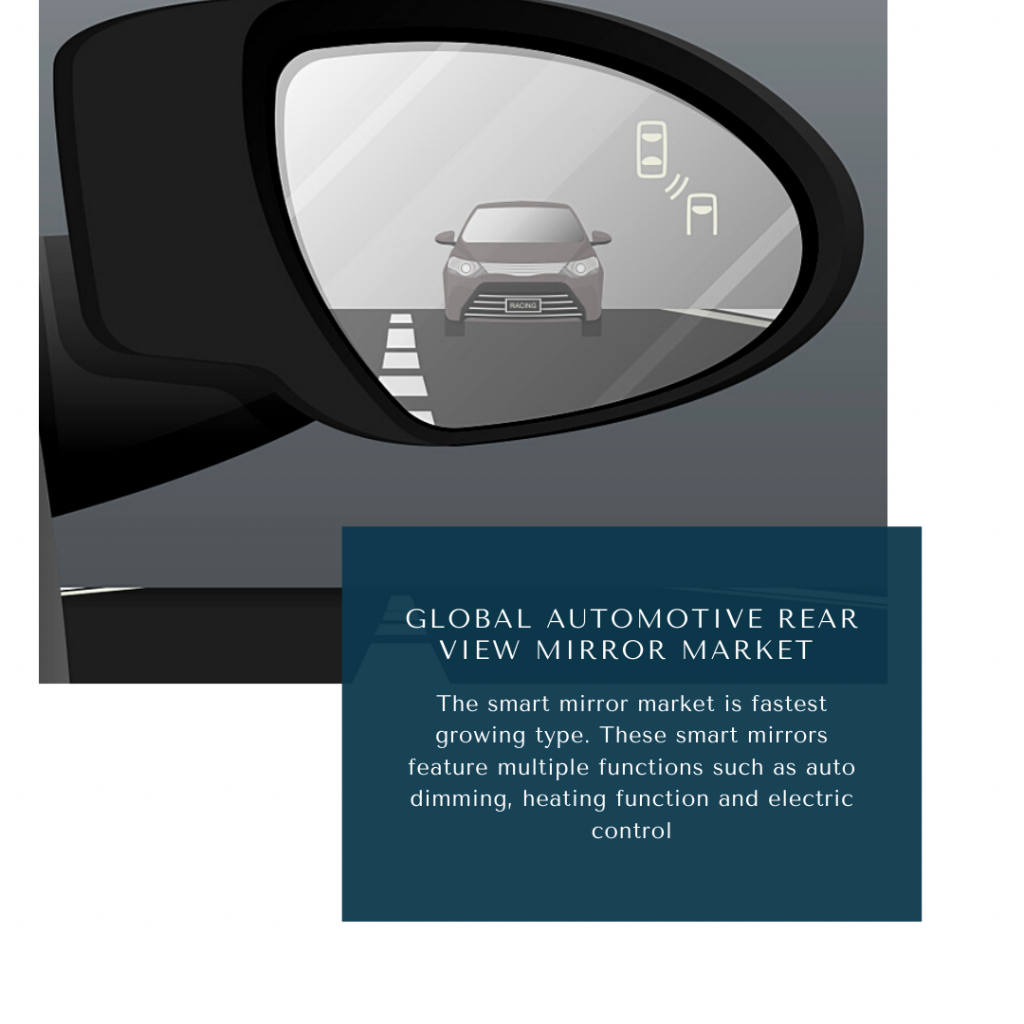 The highest level smart mirrors are replacing mirrors with cameras in the side rear view position. Japan and Europe regions have passed the feature and vehicles such as Lexus ES and Audi E-tron already feature this technology. High replacement cost and reliability on technology are the factors that will hamper the growth of this technology.

The continuous development of additional features is crucial in expansion of the market. Some of the features like power folding and control are beginning to be the standard feature in entry level and mid-segment vehicles. The auto dimming feature is provided as the optional feature and is an expensive feature critical in enhancing the safety standards. The heating function is expected to dominate the market.

The figure shows the market share of different features of rear-view mirror: 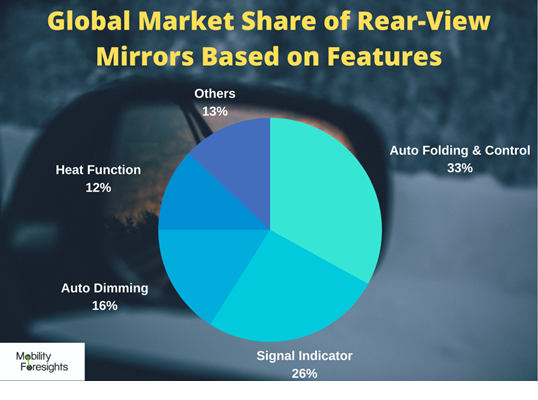 The passenger vehicles hold the dominant share in the rear-view mirror market. The advanced mirror designs, technology adopted in mirrors of passenger cars are superior to that of commercial vehicles; hence the cars have edge over them.

The power folding and auto dimming feature is available as an optional feature in every top selling cars. The Royota Rav4 model features digital rear-view mirror uses a camera to view behind the vehicle more clearly. 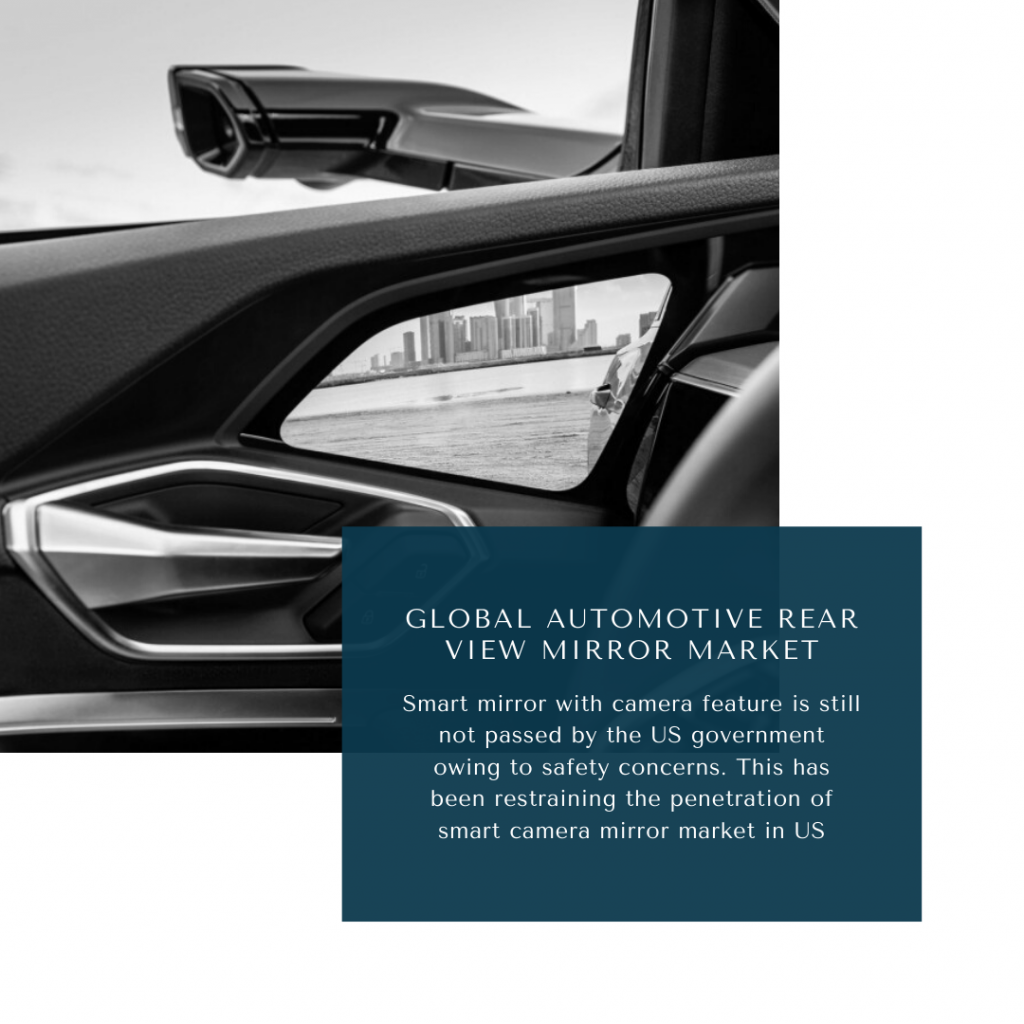 Smart mirror with camera feature is still not passed by the US government owing to safety concerns. This has been restraining the penetration of smart camera mirror market in US.

In Europe each of the top 5 selling cars come with the standard feature of power folding and adjustable, auto dimming and heating function.  Europe is leading the market in terms of smart/intelligent rear-view mirror market.

In China among top selling cars the features like the automatic dimming and power controlling and folding is available in SUVs and Sedans. But the budget cars and mid segment cars like Wuling Hongguang and Toyota Corolla feature manual dimming and folding.

In India among the top selling cars Suzuki Baleno provides the auto folding and control of exterior mirrors. However, the auto dimming option is absent in most of the top selling vehicles. But Kia Seltos, Hyundai models like Venue and Grand i10 along with power adjustable mirrors provide, manual anti-glare/dimming feature.

The digital rear-view camera is expected be a common feature in US cars as they won’t restrict the view of the driver at any instance. This feature will be crucial in pickup cars segment most commonly found in US.

Increase of ADAS and safety functions, such as blind spot detection and lane departure warning, along with continuous camera feed, will boost the adoption of smart exterior mirrors.

LATEST TREND IN THE MARKET

Ichikoh and Ficosa have been pioneers in smart camera rear-view mirrors segment. The incorporation of camera and sensors has led to rise of many electric and electronic component manufacturers to blend in the manufacturing of the camera driven mirror market. One such company is Stoneridge Inc from USA.