A sunroof is often considered as an optional feature in automobiles, which is either a fixed or sliding mechanism. The trend of the sunroof as an optional feature has gradually changed to being one of the standard features in premium and luxury segment cars. The automotive sunroof market is driven by innovation in glass technology and rise in demand for safety, comfort and convenience features. 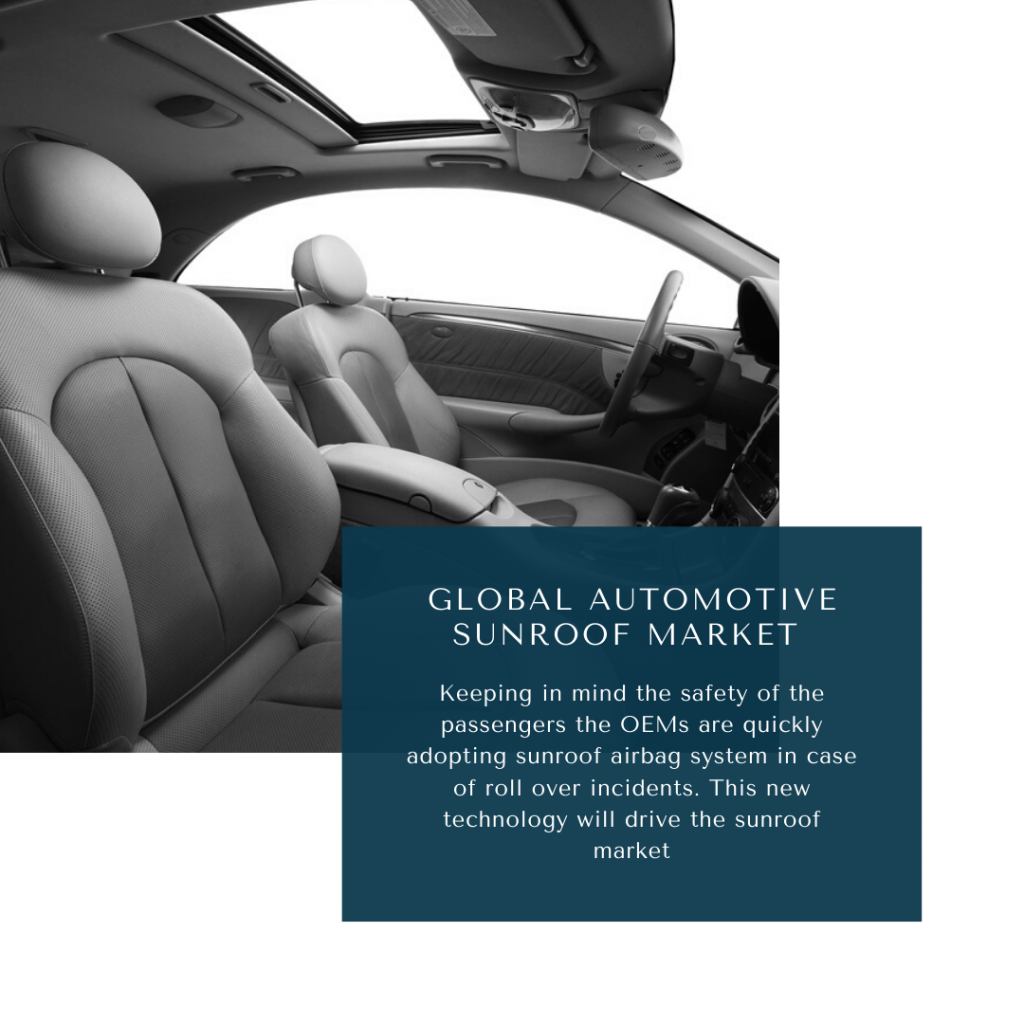 OEMs are engaged in developing advanced technologies to manufacture sunroof including composite materials for developing lightweight sunroof solutions, thus increasing the demand in the industry. High integration and maintenance cost and low penetration in budget vehicles are some of their drawbacks.

Conventional ICE vehicles will undergo a complete revamp and upgradation of features in the next few years giving rise to addition of premium features in the lower segments. Saturation of additional features in the vehicle will drive OEMs to offer sunroof at a more affordable price.

Electric vehicle growth globally will positively impact the growth of sunroofs due to addition of premium features in their respective EV models by most OEMs. High growth rate of SUV segment is expected to be beneficial for the sunroof industry due to rising penetration of sunroof in the SUV and compact SUV segment

Advancements in material technology as well as shifting consumer preference for sunroofs, especially in developing nations will further boost the sunroof market globally. Hybrid vehicles are likely to be equipped with panoramic sunroofs in order to entertain all-round visibility and maximum ventilation

The growing demand for SUVs and luxury cars over the years has boosted the automotive sunroof global market.   To augment the sunroof vehicles are now fitted with tinted or UV-reflective glasses in order to avoid sunlight. 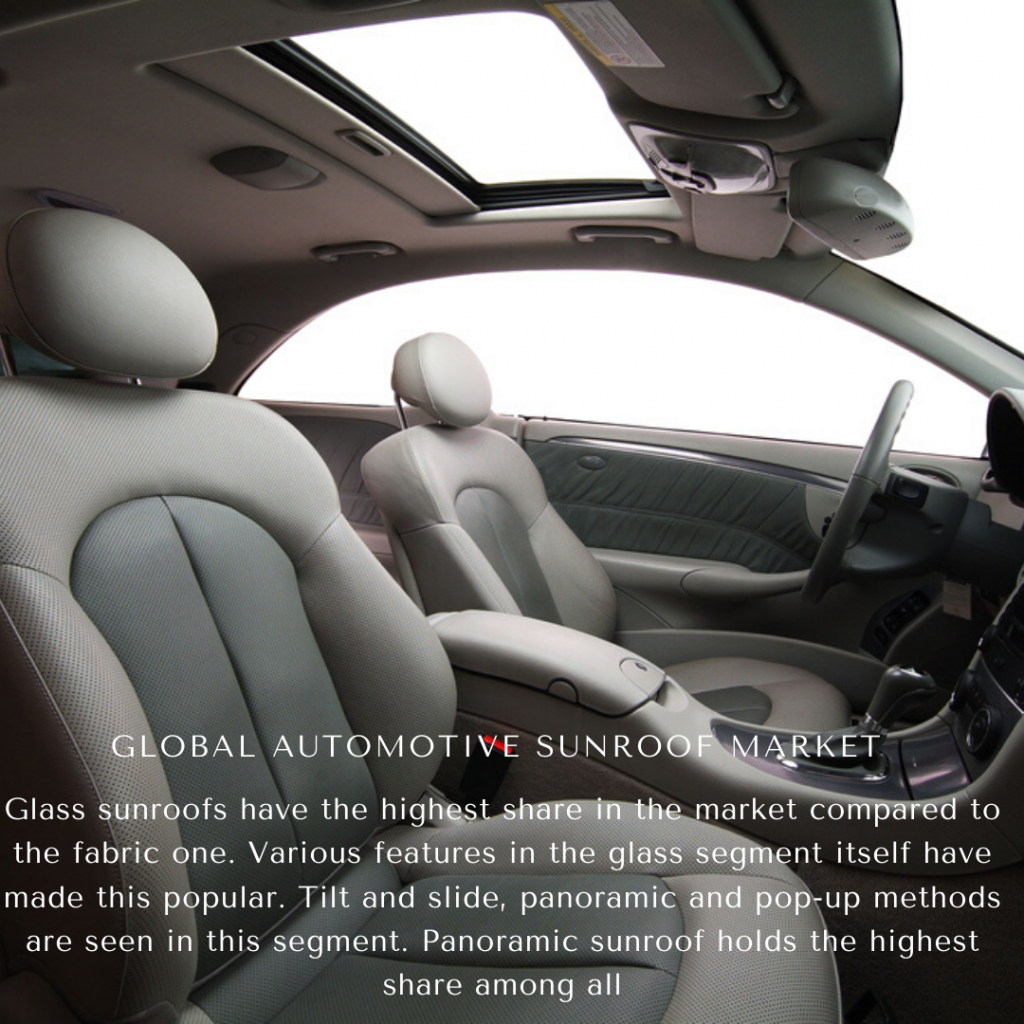 Keeping in mind the safety of the passengers the OEMs are quickly adopting a sunroof airbag system in case of roll over incidents. This new technology will drive the sunroof market.

Currently, the two main types of sunroofs being offered are the Spoiler type of sunroof and the premium panoramic sunroof.

Glass sunroofs have the highest share in the market compared to the fabric one. Various features in the glass segment itself have made this popular. Tilt and slide, panoramic and pop-up methods are seen in this segment. Panoramic sunroof holds the highest share among all.

Another interesting development in this space is that of solar sunroofs, which is most likely to become common in electric vehicles rather than conventional vehicles 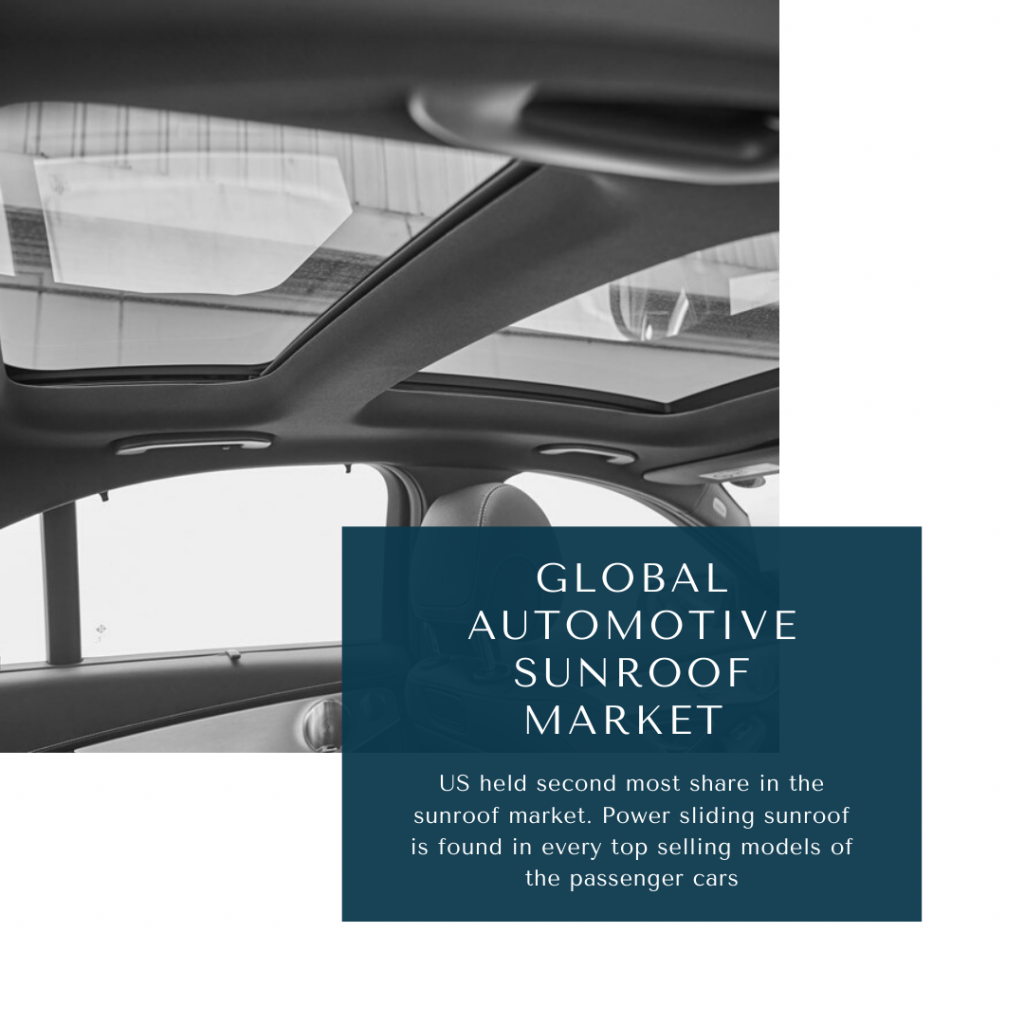 Since fabric type is limited to convertible cars, it has always been trailing the glass type.

Sports Utility Vehicle holds the highest share in the market. Since the structure of SUVs demand larger sunroofs that has propelled the market in this segment. SUVs constitute 1/3rd of the market share among the types of vehicles. Luxury cars hold the next best share and these two segments hold almost 3/4th of the total global share. 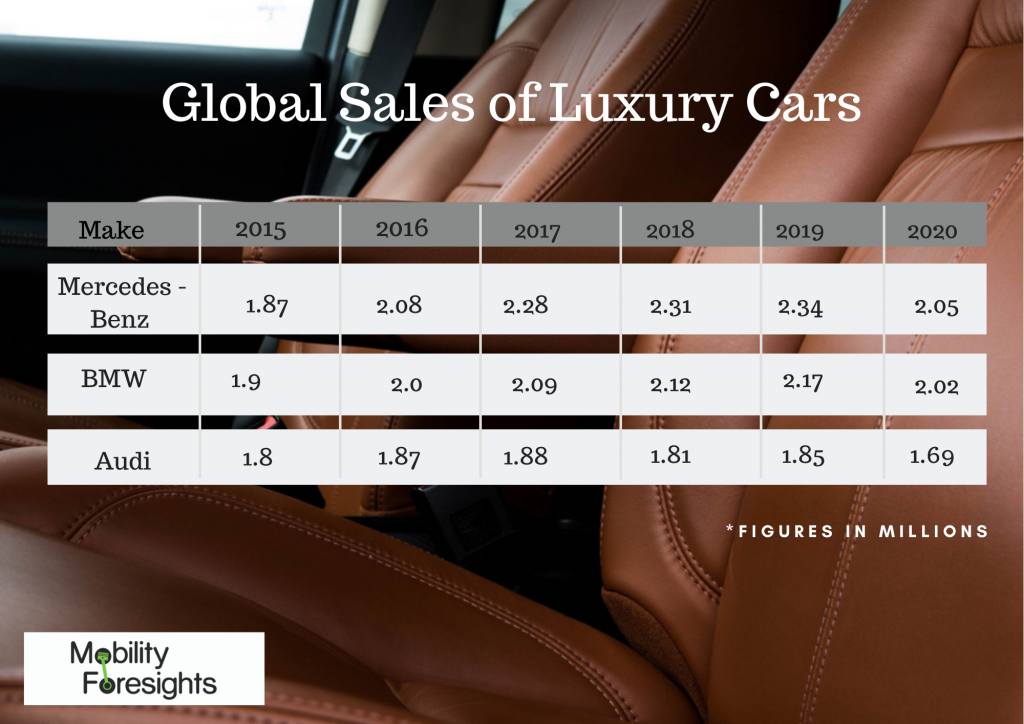 The volume growth of the sunroof market in USA will be predominantly influenced by the likes of Ford, GM and Chrysler and their strategy to provide premium feel-good features in their upcoming models

The spoiler type sunroof showed an approximate penetration of 21% in the year 2020 accounting for ~3.6M units sold during the year.

On the other hand, the panoramic sunroof had a mere 5% penetration at about 0.5M units sold in 2020, thereby wrapping the US sunroof market at about 4.12M units overall

Europe holds the largest share in the sunroof market. Major premium car manufacturers are from Europe and sunroofs come as a standard option in this segment. This has made Europe one of the leading markets in the sunroof sector.

Every top selling car in Europe has a sunroof option in most of their variants. Panoramic, glass sliding sunroof is most commonly found sunroof among top selling cars.

China featured the highest penetration of both categories of sunroof among all regions at a combined penetration of ~XX% in 2020, making it the single largest market for sunroof globally. For a sunroof supplier, China is the market that it will have to eye on, to target volume growth in premium sunroof installations until 2026. Since the sunroof market is a very niche industry, the expectancy for new entrants to start a trend or enter the market is very unlikely. This will also mean growth for the existing sunroof suppliers in the region such as Inteva and Webasto who have new partnerships with new EV startups in China.

The sunroof market in China accounted for 15.8M units in the year 2020 out of which 9.9M units were spoiler type sunroofs and 5.9M of them were panoramic sunroof

Models such as the Buick GL8, Buick Regal, VW Golf and Hyundai Fiesta had a 100% penetration of spoiler type sunroof in 2020

The largest automobile market in the world , China , has been the fastest growing market in the sunroof segment. The shift towards the premium and luxury cars in the country has boosted the sunroof market in this region. Among the top selling cars Volkswagen Lavida and Haval H6 come with sunroof as option.

In the VW group,the VW Sagitar, Tiguan, Passat, Tayron, Magotan and T-roc were among the top selling models to feature a panoramic sunroof.

The Indian sunroof market was skewed to spoiler type sunroof with panoramic sunroofs showing less than 1% penetration overall. In the year 2020, ~0.2M units of sunroof was sold in the region

The Tata Nexon, Hyundai Venue and Hyundai Creta were the largest contributors of volume market for sunroofs in 2020

British-Chinese brand Morris Garages with their Hector, Kia with their Seltos, Hyundai with its Venue are the models which is creating entry of sunroofs in the mid segment variants in 2020

Sunroof in Indian cars is found in mid-segment and premium cars. The entry level cars which constitute the top selling cars list do not have a sunroof. Among the top selling cars in India, Kia Seltos and recently Hyundai Venue are the ones to sport the sunroof. The demand for sunroof by the Indian audience will push the auto makers to provide the sunroof even in the hatchback segment. Sunroof manufacturing companies are investing in lighter in weight and high durable sunroofs. Such technological advancements will boost the market.

The global sunroof market will grow from XXM units in 2019 to XX units in 2025 at a CAGR of XX%. The automotive sunroof market will grow in volumes predominantly due to the EV growth post the pandemic.  China will be the largest contributor of the volume growth due to its aggressive EV market growth, followed by Europe where higher popularity of premium vehicles will be an additional factor

Use of polycarbonate for better strength and lightweight characteristics is the way forward for OEMs to deploy sunroofs in their future vehicles, most probably in their electric variants

Premium OEMs such as BMW AG, Audi AG, and Daimler AG are continuously investing in R&D for incorporating solar sunroofs in their cars for improving the efficiency of electric vehicles.

Webasto from Germany is the leading sunroof manufacturer and supplier in this sector. Some of the other players are Inalfa (Netherlands), Yachiyo (Japan), CIE Automotive (Spain), BOS GmbH (Germany), Johnan Manufacturing (Japan) and Wuxi Mingfang (China).

The market is dominated by Webasto but followed closely by Inteva products LLC, which is headed in Michigan and is a major supplier to the Volkswagen Group

Some of the other players include Saint Gobain of France and Aisin Seiki of Japan.