US,the world`s second biggest passenger car market has always been among the most matured and tech savvy auto market. US was the first market to receive electric car globally in 2010, due to a sizable chunk of early adopter population.

In US,the car density per 1000 inhabitants has been >750 for more than a decade and that has resulted in heavy traffic congestion in all major cities, forcing longer commuting hours on motorists.By June 2019, the average number of hours spent per day by a US motorist reached 46 minutes, thus necessitating entertainment and real time weather and traffic information on-board.

Smartphone penetration, grew at double digits during 2009-2019 and reached 74% by 2018 -end and thus more than 85% of cars sold in June 2019 had touchscreen infotainment systems either as standard fitment or at least as an option.

The new car market in US is heavily skewed towards high priced SUVs and pickups.About 71%(~12 Million) of new cars sold in US in 2018 belonged to SUV and pickup segment.Since, the average transaction prices of SUVs and pickups is in the range of $42,000-$45,000 as compared to $26,000-$33,000 for sedans, we expect the growth of SUVs will be major drive for touchscreen infotainment system market in US.

The growing integration of AI(personal assistant) and augmented reality(sourced from front camera) in premium cars is the biggest technology trend in auto touchscreen infotainment system market in US.

Technology sharing, platform sharing and economies of scale have been long proven formula for the auto industry to keep costs in check and the touchscreen infotainment system market in US is no exception to that.At present it is limited between the likes of Toyota-Mazda, Toyota- BMW, but going forward as more autonomous features are integrated in the infotainment system, we believe tech sharing will also go up to limit the costs.

Among the risks associated with the touchscreen infotainment system market in US is the long list of customer complaints associated with Ford,Cadillac,Chrysler and Honda infotainment systems. There have been numerous complaints linked with malfunction, hacking,frozen screen affecting the overall reliability of the vehicle and consumer reports rating. 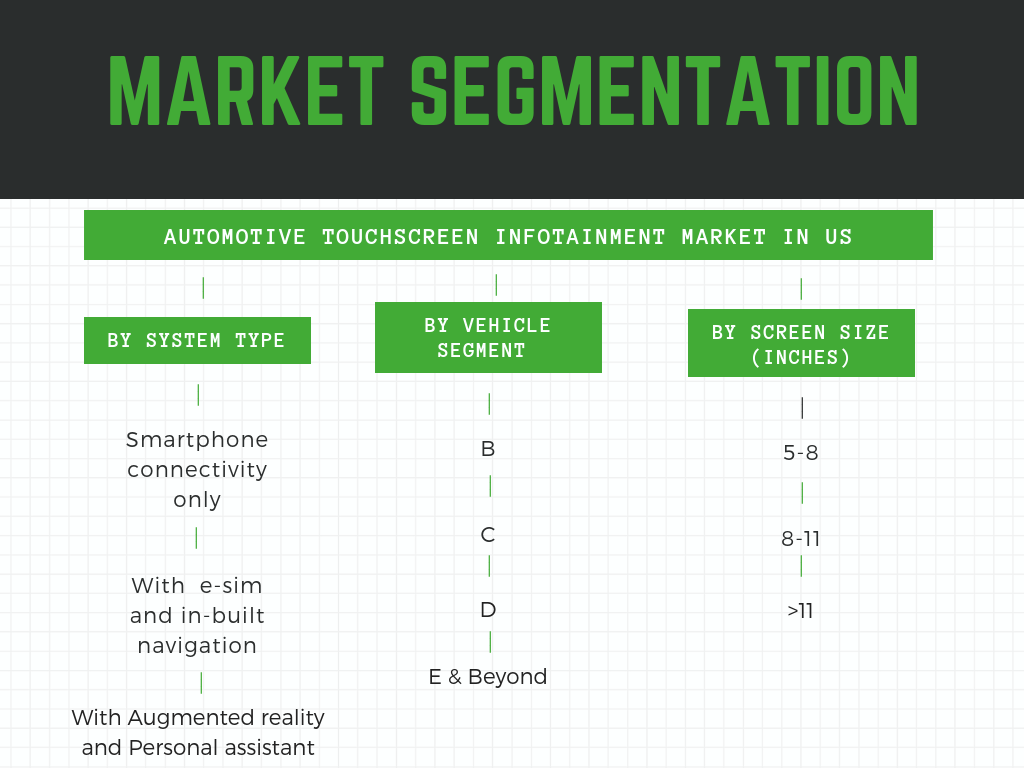 We believe 8-11-inch screens will dominate the touch screen infotainment market in US as well globally. The 17-inch screen offered by Tesla is an exception is rated among the easiest to use but is also prone to malfunction as reported by various users.

Features offered by OEMs in touchscreen infotainment system in US

As it can be seen from the above table, Android auto, apple car play are now standard across most of the OEMs  but voice recognition. in-built navigation and Wi-fi hot spot are still a standard feature only on the premium brands.

Among the mass segment brands like Toyota and Chevrolet, the infotainment system is categorized in multiple trims where the basic variant offers blue-tooth, smartphone connectivity, app suite with 6 basic speakers. In the highest variant premium sound system with 9+ speakers is offered with 8-9 inch touchscreen, in-built Wifi and navigation as standard.

Apart from Hyundai and Honda, most of the OEMs are offering on-board Wi-fi either as an standard or at-least as an optional fitment.

THIS REPORT WILL ANWER THE FOLLOWING QUESTIONS