The growing affinity to contactless and wireless technology in every aspect has led to development of wireless car charging technology. The continuous use of smartphone either for navigation or entertainment purpose while on road has led to increase in installation of wireless charging dock in automobiles.

The first Qi enabled car was launched by Toyota in its 2013 Avalon model. Since the 2016 wireless phone charging has been equipped in the most of the models. The wireless charger had a greater penetration in the luxury and premium car segment, gradually the feature has become common in mid segment and budget cars as well. 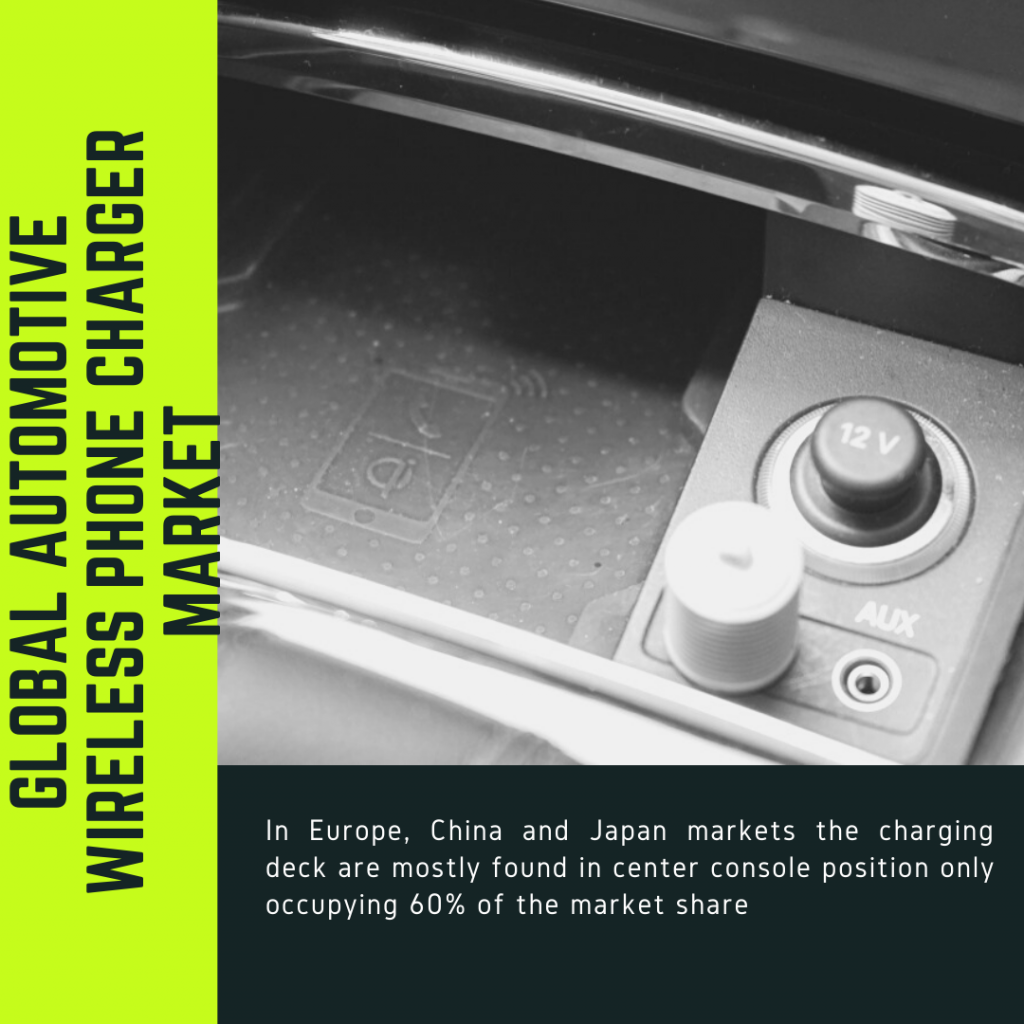 By Location of Charging Pad

Wireless chargers rely on magnetic induction or magnetic resonance to transmit the energy. Most of the chargers are “Qi” standard which ensures safety and compatibility. The corresponding mobile phones must also be of Qi standard. The other wireless charging standards Powermat (PMA) and AirFuel are the getting outdated and the respective devices are slowly phasing out.

The first vehicle in the world to incorporate in-car wireless charging was the Toyota Avalon Limited in the year 2013. Audi, BMW, Ford, Volkswagen and others have implemented these charging methods in some of the selected models.

There has been significant development in EVs in Japan and China which incorporates retrofit wireless charging systems for smartphones. The US and Germany are now the countries where the advancement of in-car wireless charging protocols are increasingly growing.

MARKET BY LOCATION OF CHARGING PAD

In the add-on devices segment too 10W chargers are most commonly found. However, 15 W chargers too are getting popular with their fast charging ability. The need for rapid charging has led to development of higher power output providing chargers.

Among the top selling passenger cars such as Chevrolet Silverado, Equinox, RAM 1500 and Toyota RAV4 and Camry are provided with wireless charging pad.

The North American region is witnessing growth in this sector as the market is driven by innovations with a range of wireless chargers. The Q4 and Q3 wireless charger bundles have been popular in the region witnessing increase in demand due to their compact size and optimum charging pace. The popularity in this region is attributed to the increase in demand for electric vehicles which has incentivised the manufacturers to produce more efficient battery chargers.

The car models that support the wireless charging system in Europe are given below; however, all the models do not come with an option of installing wireless charging plates; rather they have the feature in the basic model as well. The models are BMW 7 Series, Mercedes Benz E Class, BMW 2017 M Series, BMW 2018 X3 M4Oi, BMW – Alpina B5, D5, B6, B7, Citroen, DS, Peugeot 3008, Opel and Vauxhall, SEAT Ateca and Arona, Mini Cooper, Skoda Kodiaq and Karoq and Volvo XC40.

Toyota Corolla is the only passenger car among the top selling cars to features the wireless charging option. The latest Haval F7 too sports the charging pad.

The company Powermat Technologies has announced a strategic investment in the new office setup by the company in Shenzhen. The new office will lead the promotion of wireless technology innovation, collaborations, business as well as development between the company and other OEMs in the Asia region.

India is set to receive a funding worth $300 million from the World Bank for the development and production of electric vehicles which will propel the automotive industry to develop more wireless charging technologies.

In India until 2019 the feature was concentrated in only premium and luxury vehicles. In 2019 mid-segment and top selling cars such as Hyundai Venue and Kia Seltos came with this feature. Newly launched Hyundai Aura also features this option.

PowerSquare Bangalore based company was the first in-car wireless charging service provider in the country.

Still a growing market, the inefficiency of these chargers to not to charge quickly observed in traditional 12 Volt accessory outlets in cars will hamper the growth. However, the continuous efforts to improve the speed of charge in the future can be observed.

The wireless charging sector is expected to reach a value worth $XX billion by the year 2026, growing at the rate of CAGR XX% between 2021-2026. The growth of this market is primarily dependent on the adoption of wireless technology in the electronics market such as increase in sales of EVs as well as the capability to charge several devices simultaneously.

As of March 2021 there are 261 models of mobile phones which are QI enabled. In the future with the introduction of QI features in newly launched models will propel the wireless charger market.

Various uncertified devices which do not meet the Qi standards are unsafe are restraining the aftermarket growth.

Some of the leading aftermarket wireless charger providers are iOttie (US), Nillkin (China), Xiaomi (China), Scosche (US), Kenu (US), Basenor (US) and Belkin (US).

Several companies have entered into joint ventures and some were part of the acquisition that has made sector less fragmented, some of the recent agreements are given below:

The company Powermat Technologies has partnered with Regus Innovate, a company based in Israel to supply wireless charging services for the region and development of new powermat charging technologies.

The company WiTricity has announced incorporation of a new lab in New Zealand to be led by some wireless charging experts to develop new technologies for the advancement of this industry. The company has also announced additional funding of $18 million for the previous funds raised in October worth $34 million, the total investments amounts to $52 million.