A renewable energy source, derived from organic matter, wastes, or residuals, has the potential to play a role in reducing carbon emissions. Biofuels are one of the largest and widely accepted sources of renewable energy today.

In the transportation sector(rail/road/aviation/marine), they are mixed with existing fossil fuels such as diesel and gasoline.

Biofuel is commonly tagged as a cost-effective and environmentally superior alternative to petroleum and other existing fossil fuels.

A liter of ethanol contains approximately two-thirds of the energy provided by a liter of petrol. However, when mixed with petrol, it improves combustion performance and lowers the emissions of carbon monoxide and sulfur oxide.

Biodiesel can be mixed or combined with traditional diesel fuel or burned in its pure form in compression ignition engines. Its energy content is somewhat less than that of diesel (88 to 95%).

BIOFUEL IN THE AVIATION INDUSTRY

ADVANTAGES OF BIOFUEL IN AVIATION

The feedstocks being investigated for aviation fuel use have the potential to deliver large quantities of greener and cheaper fuel. It is unlikely that the aviation industry will rely on just one type of feedstock. Some feedstocks are better suited to some climates and locations than others and so the most appropriate crop will be grown in the most suitable location. Aircraft will likely be powered by blends of biofuel from different types of feedstocks along with jet fuel. 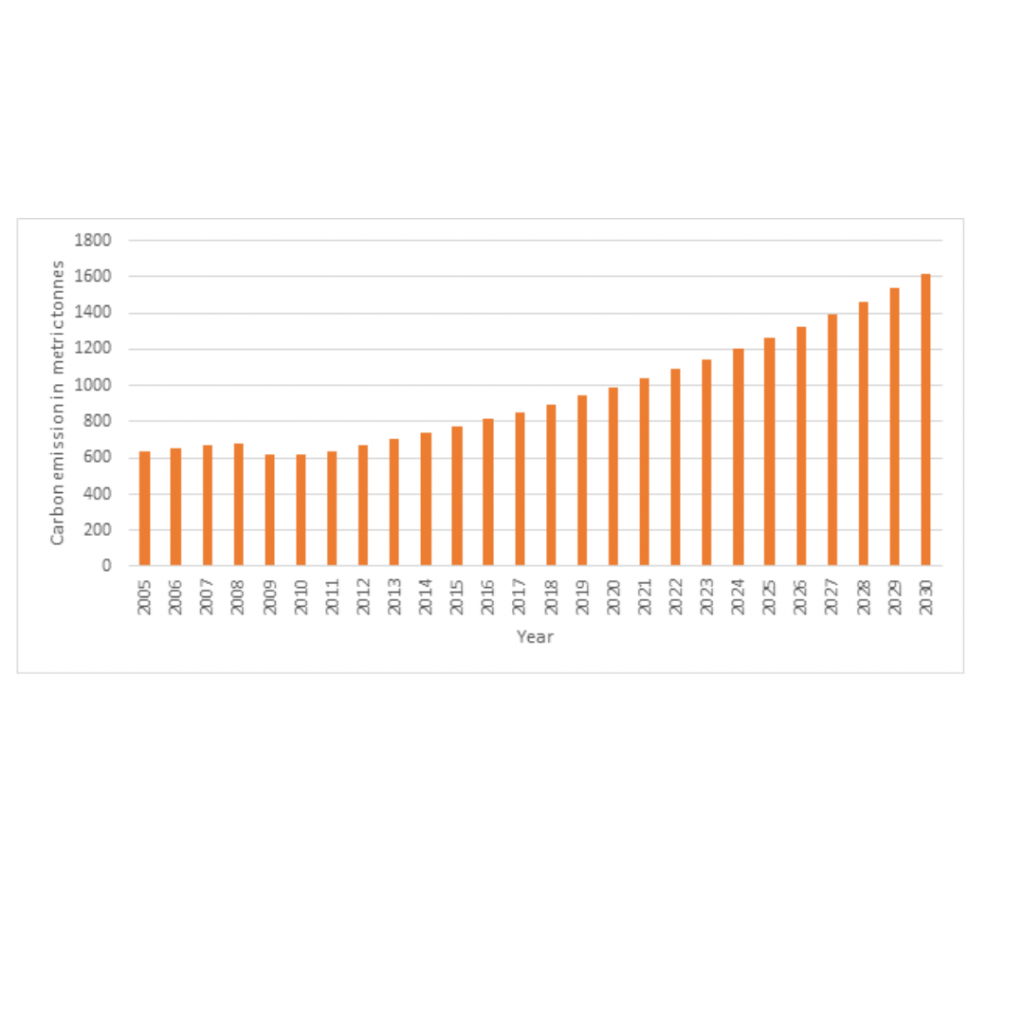 In the last few years, the aviation sector has outlined sector-specified GHG emissions-reduction targets, including the carbon-neutral growth by 20222 and a 50% reduction in carbon emissions relative to 2005 by 2050 (IATA, 2015).

The bio-jet fuels will play an important role in achieving these targets, there are very limited resources available to project the bio-jet fuel volumes that will be required under these scenarios.

Aviation is responsible for 12% of CO2 emissions from all transport. Due to this, there is a need for biofuel in the aviation sector, with on going trend the carbon emission is expected to touch 1600 metric tonnes by the year 2030.

The aviation sector uses a special type of fuel to power aircraft, these jet powering fuels are usually classified as Jet A1 fuels. The jet fuel has to meet strict specifications, with global standards set up by ASTM including for renewable and sustainable fuels.

The conventional bio-jet includes aviation biofuels made by hydroprocessing of oils and fats to make HEFA(Hydro processed Esters and Fatty Acids).

The other two advanced bio-jet pathways now certified are SIP and ATJ.

The ATJ route involves fermentation of sugars to alcohols, such as ethanol or butanol. These are further upgraded to bio-jet fuel, as demonstrated by companies such as Swedish Biofuels.

As per the U.S. Energy Information Administration, the global aviation sector consumed 310 Bn Litres of jet fuel in the year 2012, this accounted for 12% of total global consumption of transport fuels.

The Global aviation industry is expected to grow by about 3% per annum, still, growth in the use of jet fuel will likely be lower because of improving technologies and ever-increasing fuel efficiency.

The U.S. Federal Aviation Administration (FAA) forecasted 1Bn gallons of Bio jet fuel production in 2016. Each tonne of jet fuel is 1250 L with appropriate conversion factors. 3.8 Bn L of bio-jet fuel is forecasted to be produced by 2018.

The U.S Air Force is expected to replace 50% of conventional Jet fuels with renewable alternatives such as bio-jet fuels. On similar lines, The European Union (EU) has set up a target of 2 Metric tonnes of bio-jet fuel to be produced and consumed in the Eurozone by the year 2021.

Though the vast majority of commercial volumes of bio-jet fuels are produced through the HEFA pathway, the main product in all but one of these facilities is HEFA diesel.

Boeing recently applied for verification of a blend that includes HDRD and renewable diesel with jet fuel. Boeing has made testings for blends of up to 15% of this fuel in a demonstration flight. If approved, this pathway could have a significant impact on bio-jet production capacity because renewable diesel with good cold-flow properties could also be used as a bio-jet component. 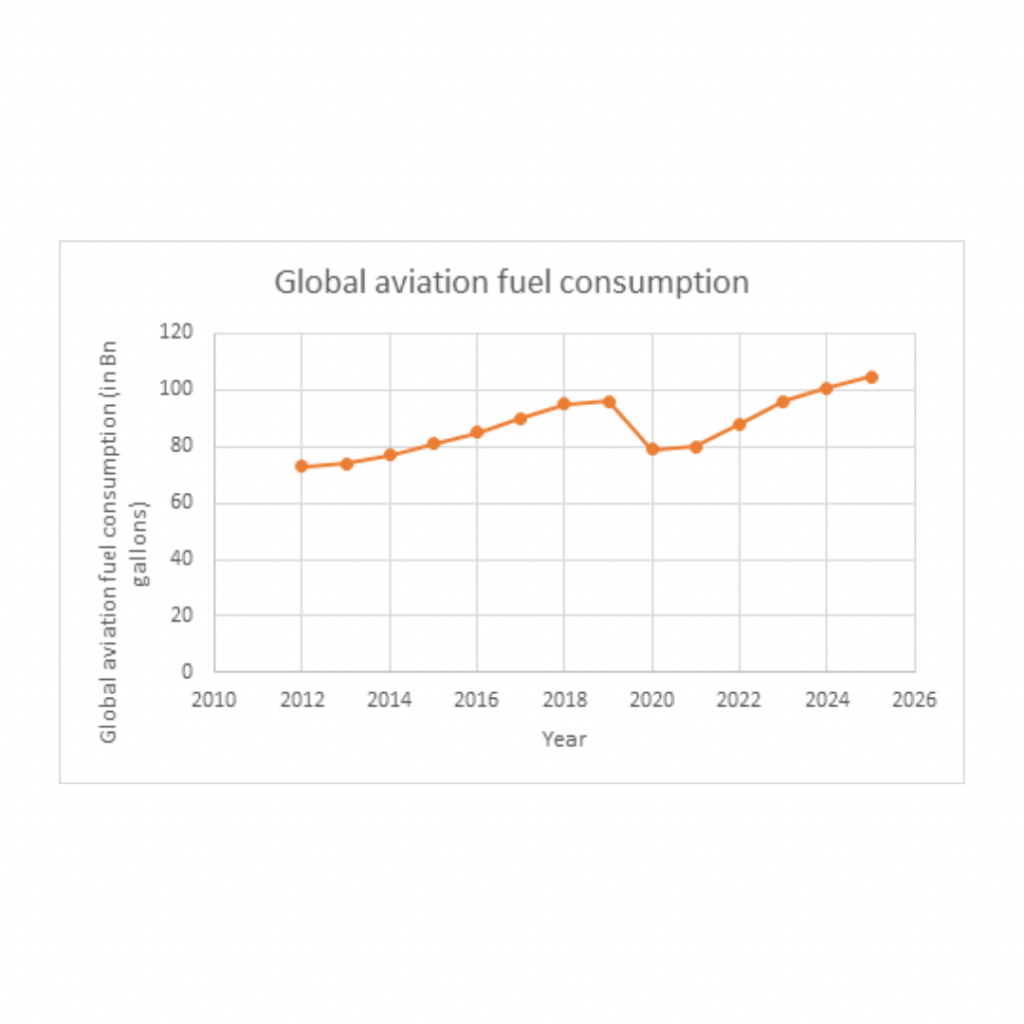 The demand for aviation biofuel is directly related to global aviation fuel consumption and the growth will follow the almost same trend.

Boeing set a target of 1% biofuel in total consumption for the year 2016, while

The estimated targets are less unlikely to be met because the expansion of production capacity has been much slower than it was expected to be.

The Projections by Boeing highlight that the biggest increases in aviation-fuel demand will be in Asia, Africa, Latin America, and the Middle East.

This demand will be driven by an increased passenger and cargo aviation traffic, the developing economies of India and China are leading the way in aviation biofuel. The bio-jet fuel production in these regions will be dependent on regulatory policies where applicable, feedstock availability and harvesting is also an important factor to be considered.

The APAC member countries like Indonesia can develop bio-jet fuel production capacity based on the domestic production of palm oil, instead of exporting the oil to facilities in other countries. However, issues such as sustainability and indirect land-use change must be addressed.

If Bio-jet fuels are to be used in mass quantities by the aviation industry in the next 50 years, they must conform to strict regulations certified under ASTM standard D7566, and their performance will have to be equal to or better than conventional jet fuel.

It is expected that biofuel will offer an improvement to conventional fuel, in part such as lower sulfur content. The cost of bio-jet is not yet precisely determined, as this is not a readily available commodity, and contracts for the purchase of volumes of bio-jet do not usually disclose the price.