The Airborne Warning and Control System (AWACS) is an air defence mobile radar surveillance and control centre. In a specially modified Boeing 707, the U.S. Air Force-developed equipment is installed. When not in use, the radar antenna may be rotated around on a turntable inside a 9-meter (30-foot) diameter circular rotodome with an elliptical cross-section and an interior depth of 1.8 metres (m). At a distance of 370 kilometres (200 nautical miles), the radar system can detect, track, and identify low-flying aircraft, as well as high-level objects at considerably larger distances. 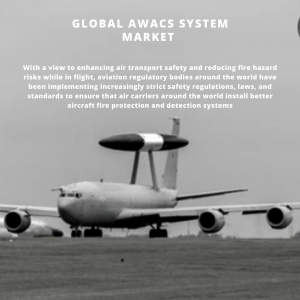 It’s capable of tracking marine activity, and it can function in any weather, over any terrain, thanks to its satellite-based tracking system. An airborne computer can monitor enemy activity and maintain tabs on the whereabouts and status of any aircraft within striking distance. Because of its high speed, this communications technology is largely impervious to jamming and allows the pilot to direct allied aircraft in the chase of an enemy jet.

Global and rapid airborne surveillance, warning, and control assistance for Alliance goals are the core missions of the AWACS fleet. The fleet makes it possible for data to be sent directly from aircraft to command-and-control centres on the ground, at sea, or in the air. The technology also gives the Alliance with a better view of the marine surface at all altitudes, which is critical for surveillance missions.

With a view to enhancing air transport safety and reducing fire hazard risks while in flight, aviation regulatory bodies around the world have been implementing increasingly strict safety regulations, laws, and standards to ensure that air carriers around the world install better aircraft fire protection and detection systems. has pushed for more stringent criteria for aircraft fire prevention and detection equipment in order to improve the safety of air travel. Aircraft fire prevention systems are likely to see significant expansion as a result of this.

Terrorist groups are increasingly deploying sophisticated weaponry like rockets in these conflicts. In order to protect their borders from these weapons, countries in the area are ramping up their defence spending by installing new radar systems. Saudi Arabia, the United Arab Emirates, and Qatar are among the countries in the area increasing their investments in radar and air defence systems. States’ defence spending has risen in response to an increase in transnational disputes among diverse nations. Countries like Romania, Poland, and Ukraine have increased their spending on air defence systems due to tensions between Russia and NATO.

Various countries are working on cutting-edge weaponry that can counter modern air defence systems including the Medium Extended Air Defense System (MEADS), Patriot Advanced Capability-3 (PAC-3), and S-400. India, China, and Russia have all produced hypersonic missiles that are challenging to intercept with current missile defence systems. The BrahMos missile, built by India and Russia together, is tough for earlier missile defence systems to stop. As a result of these advancements, high-speed air defence radar systems of the next generation are now required. Defense forces are increasingly requesting technologically sophisticated fighting equipment.

There has been a varied interest shown on the AWCS system requirements to counter these missile systems on the regional defence level. There is a worldwide push to create stealth aircraft, but governments are also spending extensively on counter-stealth technologies, such as sophisticated surveillance systems.

The Global AWACS System Market can be segmented into following categories for further analysis.

It’s been so successful that other countries have tried to create their own version of the AWACS system with different degrees of success. These countries have seen the AWACS in action in a number of operations, and they know how effective it is as a force multiplier for US military commanders in combat. 4 As a result, several countries have invested a lot of time and money on acquiring or developing their own AWACS systems.

The AWACS has been retrofitted with varied levels of compliance and requirements alongside the complete analysis of latest military technology. It has been most recently integrated with the passive detection controller which is responsible for the operation of the on-board ESM System, adding to the overall situational awareness and threat warning capabilities by clearly identifying the type of aircraft, ship, or land installation. This information is shared inside the crew and to outside agencies to add to an overall identified Electronic Order of Battle. This fleet also the carries extensive avionics equipment for navigation, communications, and data processing. One such system is the Joint Tactical Information Distribution System (JTIDS), which instantly transmits a large amount of valuable and strategically important information to Allies.

There has varied levels of upgradation onboard the AWACS based flight system to increase the capabilities of operation of the radar analysis. The Northrop Grumman/Raytheon Multi-Platform Radar Technology Insertion Program (MP-RTIP) radar with an upgraded Battle Management Command and Control system would be outfitted as the initial increment. GMTI capability comparable to that of the JSTARS was incorporated into the MP-RTIP, as was AMTI capability focusing on air-moving target indicators (AMTIs). The E-10’s AMTI capabilities would make it far more successful in Cruise Missile Defense (CMD) missions than the E-3 and it’s AN/APY-1/2 radar.

Several defensive systems rely on radar. Several nations are investing substantially in their surveillance systems to decrease reliance, identify infiltration, and respond fast because of the rising territorial conflicts and threats from enemies.

The rising use of unmanned aerial vehicles (UAVs), stealth aircraft, hypersonic missiles, and electronic warfare systems has prompted numerous governments to improve their radar capabilities. The advances in range, detection, identification, and integration with other sensors, as well as adaptability to new missions, platforms, and conditions, are pushing the market for new military radars on a worldwide scale.

Northrop Grumman Industries has been working on the AWACS Radar since its inception as it claims to be the longest contracting project of the company on an industrial scale of development with continuous manufacturing upgrades.

The AWACS radar is widely regarded as the world’s best airborne surveillance system. Electronic countermeasures and three-dimensional, long-range, 360-degree coverage are provided by the system, which can scan up to 200,000 square miles surrounding the aircraft, or 250 miles in all directions.

Boeing’s E-3 AWACS aircraft, which are equipped with the radar, have it placed in a rotating dome for easy access. The RSIP enhanced the operational capability of the radar’s electronic countermeasures ability and improved the system’s reliability, maintainability, and availability. This helped modernize the AWACS fleet, which the U.S. expects to operate beyond 2035.

SAAB Defence System which works on its focus towards generation of high-end capable air-based machinery and technologies. It has worked upon the Airborne early warning control system since many decades to achieve a commendable technological development.

The Global Eye AEW&C System is a combination of Saab’s Erieye Extended Range radar with an advanced suit of sensors and a multi-domain Command and Control (C2) system. It uses the Erieye ER (Extended Range) radar to expand the detection distance for small and future targets.