1.The transportation industry is changing at a rapid pace due to globalization. Therefore, increase in smart boats and advanced facilities at seashore and improvement in security & safety regulations at marine in most of the emerging countries.

2.The coastal surveillance system works efficiently by data gathering from sensors such as radar, EO, RDF, AIS, GPS, ESM device, and active/passive sonar, and are processed by a Command & Control System to establish the tactical picture.

3.Tactical picture is distributed to users with various purposes via a wide area network. In addition, implementation of various rules and regulations for the better integration and regulation of maritime security boosts the maritime surveillance market share.

4.The most promising countries for the transportation sector, owing to increase in development and adoption of the latest technologies used for ships, implantation at the coast side. Furthermore, rise in deployment of autonomous marine devices from giant companies is expected to fuel the growth of the market.

The consumers have shifted their interest toward technologically advanced, safe, and secured transportation service-based vehicles for various applications in the marine industry. The global maritime surveillance market is driven by safety awareness for maritime and rise in trade & freight transport activities through sea.

The Increase in enhanced security concerns, rapid increase in international trade by sea, and regulatory compliances for trade by maritime fuel are the factors responsible for the maritime surveillance market growth. 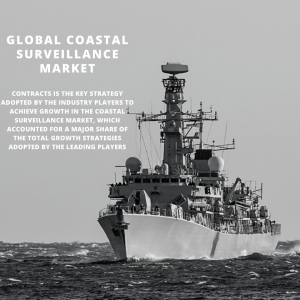 The companies are conducting R&D activities to provide safety at sea level. For instance, Indra has designed an integrated state of-the-art border surveillance systems for coastal and terrestrial supervision.

The SIVE system consists of a single or multiple Command and Control Centers (CCC) and a set of Sensor Stations (SS) forming a hierarchical architecture and can be deployed across the surveillance area and adapted for ground or coastal surveillance.

3.Rise in deployment of autonomous marine devices from giant companies

4.Rapid increase in international trade by sea, and regulatory compliances

The Covid-19 pandemic will exacerbate the offshore law enforcement gap, as coast guards and navies look inward to manage domestic crises rather than police the seas. Pirates, poachers, and smugglers, on the other hand, can continue operating.

They may even have greater incentive to resort to crime, faced with few other opportunities in a global recession.Illicit fishing is likely to increase as well. As law enforcement on the ocean declines in the coming months.

It will be worth watching data from vessel automatic identification systems (AIS) and satellites to determine whether signals of illicit fishing, such as activity within marine-protected areas and AIS spoofing and toggling, tick up.

A less secure ocean will be less well-managed and less able to sustainably provide resources like fish over the long term.By contrast, legal industrial fishing operations are likely to decline, especially over the near term, from a combination of the risk of being at sea in a pandemic and supply chain complications caused by market closures.

Decreased law enforcement at sea may give malefactors more opportunities to fish illegally and to ignore quotas. Supply chains may face pressure to move toward increased transshipment of fish at sea as ports are closed and access restricted.

Vessels that return to shore each day are common in small-scale or near-shore industrial fisheries and in artisanal fisheries throughout the developing world. These vessels do not run a risk of developing an outbreak while far offshore.

Contracts is the key strategy adopted by the industry players to achieve growth in the coastal surveillance market, which accounted for a major share of the total growth strategies adopted by the leading players.

FLIR Systems made an announcement about the introduction of SeaFLIR 280-HDEP, which is a coastal surveillance sensor system. SeaFLIR 280-HDEP is developed to be used in any maritime mission situation and offers unparalleled battlespace awareness and agility support.

Intelligence gathered from coastal areas is crucial for vessels to enter and leave a harbor easily and safely. Rising incidence of illegal/illicit activities in coastal areas, including illegal trade and smuggling has been fueling deployment of moderate scale coastal surveillance systems.