Contactless Payments as the name suggests, it is a mode of payment wherein the buyer’s card or smartphone does not come in contact with the payment reader to complete the transaction.

It includes RFID,QR (quick response) codes, mobile payments and NFC (near field communication) technology where the transactions take place over a specific radio frequency, initiating the communication between card or smartphone and the reader. 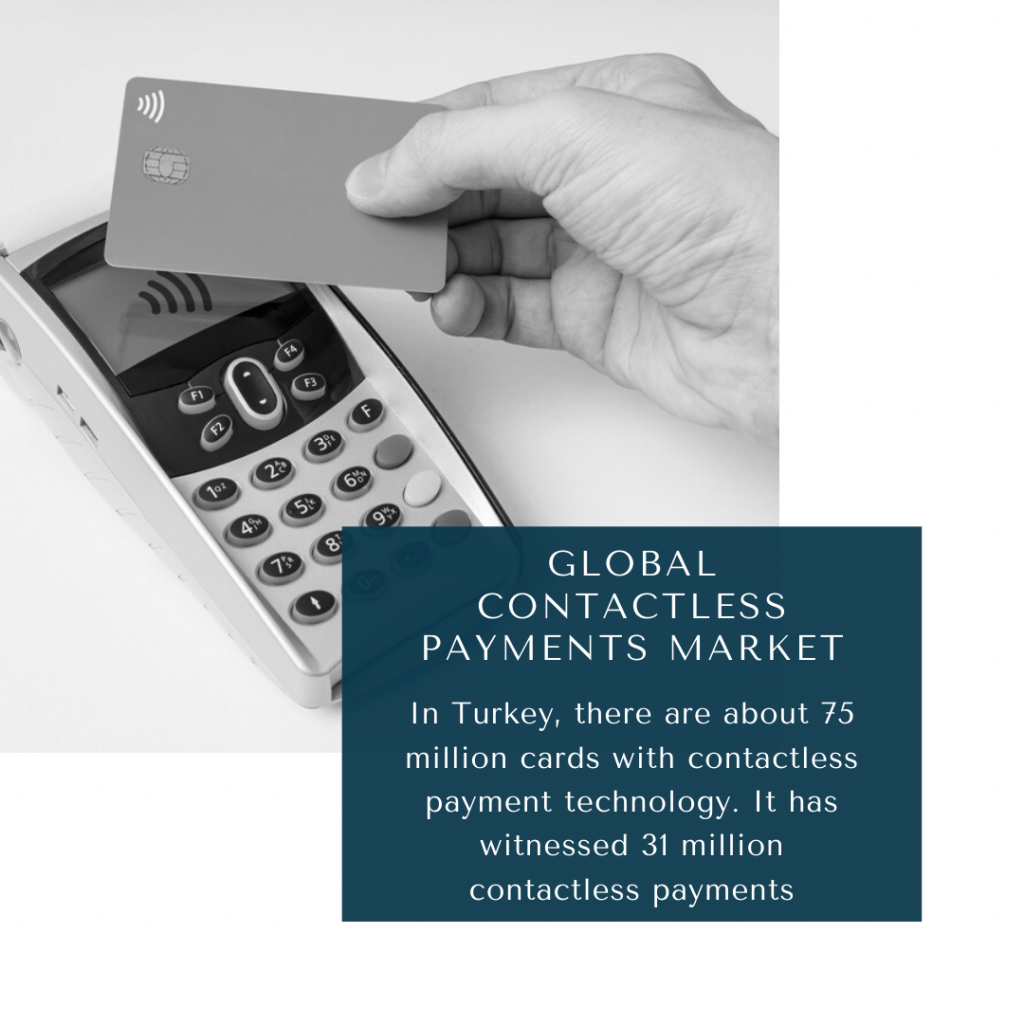 RFID tech works at a distance of several feet, but NFC only functions within a few inches

During the time like this where minimal physical contact is warranted, contactless payment is undoubtedly expected to see a huge rise in demand. However, minimal control over the contactless cards has led to enforce limit on the limit of the transaction in most of the countries.

By Mode of Payment

WHO (World Health Organization) has advised using contactless payment methods over cash to fight against the pandemic. 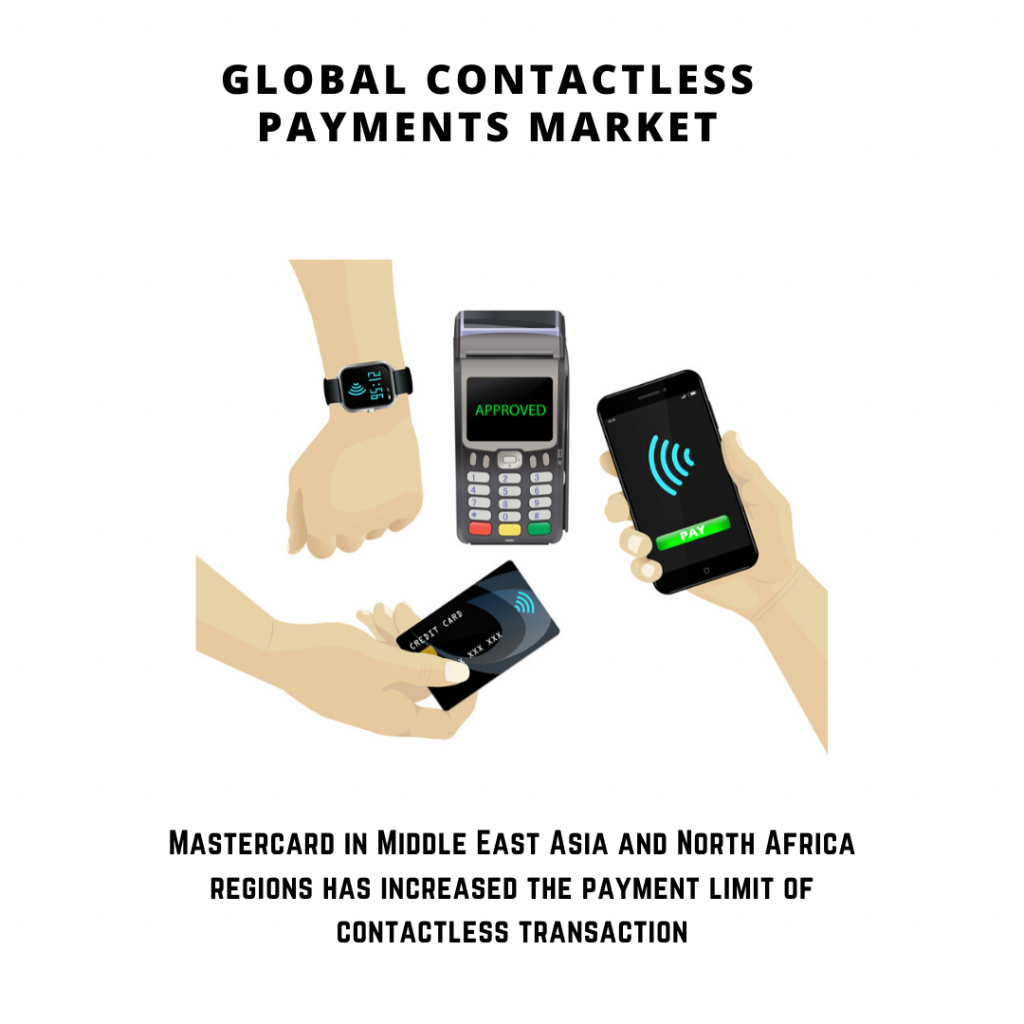 In Turkey, there are about 75 million cards with contactless payment technology. It has witnessed 31 million contactless payments in first 2 weeks of March an increase of 23% compared to last month. Payments using smartphones has also seen 2.5-fold annual increase.

The Middle East and North Africa region has witnessed more than 200% growth in the contactless transactions.

Many public transit systems are looking at moving to EMV contactless payments, and getting rid of cash, paper tickets and closed-loop card/token-based system. Visa alone is currently engaged with more than 500 cities across the globe and in next 12 months, quite a few of these projects will be live.

In Latin America, ~80% of transactions are still carried out in cash, digital payments penetration was among the lowest globally.but,now things are changing at a rapid pace.

In Jan-May 2020, five countries in the region saw more than 30% of their transactions becoming contactless. Mobile wallets like PLIN and Yape — both powered by Visa’s payments technology have seen their user count grow past 1 million mark in Dec 2019-June 2020.

Visa is already cashing in on the opportunity and in June 2020, announced that it was working on a partnership with Facebook to help power the new payments feature on WhatsApp in Brazil. 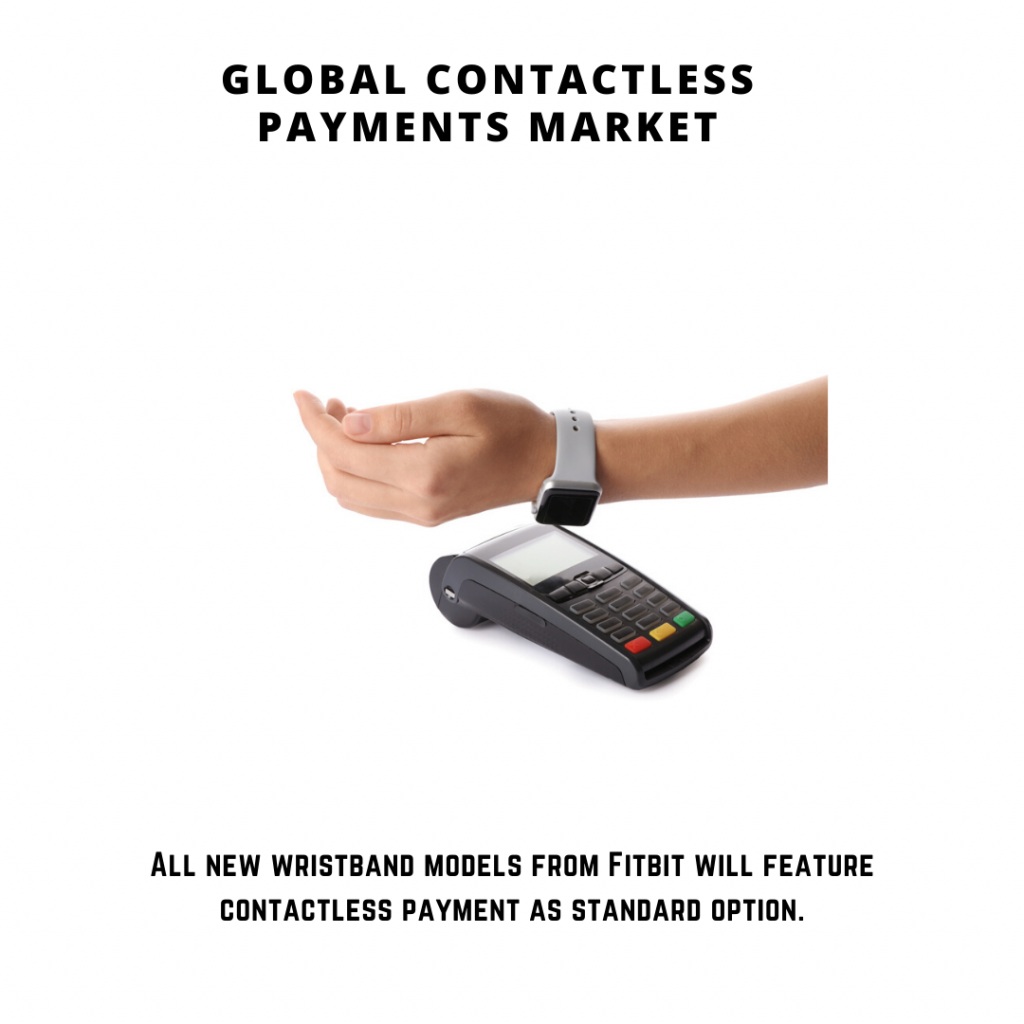 US Federal Reserve has started setting aside the incoming currency from Asia to avoid the circulation for a period of 10 days in March 1st week.

Airfield Supply Company – cannabis dispensary(with up to 1500 customers per day) partnered with cannabis POS platform to add Treez Pay Powered by Stronghold to its list of payment solution.  California-based Island Pacific Supermarket grocery chain is now accepting contactless payment at each of its locations.

In July 2020, First Hawaiian Bank started to roll out of ‘tap and go’ contactless debit and credit cards to its customers.

In June 2020, Wirecard  collaborated with Stocard, to launch a new mobile payment feature in the Stocard app.Now, the 50 Million  Stocard users will be able to make contactless payments in-store and online.

Earlier in June 2020, BNP Paribas Electronic announced that a first batch of 10,000 and 15,000 Visa Premier biometric cards will be offered this fall. Among other banks, Crédit Agricole Touraine Poitou Regional Bank is planning to launch fingerprint payment cards at three regional banks before the end of 2020.

China, unlike matured economies like Japan and U.S. has embraced the online payment like no other, almost bypassing the intermediate payment cards system.

The government has made sure the Chinese lenders disinfect the notes and also keep them in safe avoiding the circulation. This will lead to increase of adoption of contactless payment.

Earlier in April 2020, China rolled out its digital currency in four cities(Shenzhen, Suzhou, Xiongan and Chengdu), as a part of its move to become the world’s first cashless society. Franchisees of Starbucks, McDonald’s and Subway chains in China will test the national digital currency in the near future.

Contactless payment was already growing at a rapid pace since Mid- 2018.The continued surge of COVID cases in the country has given it a further push which will continue in the foreseeable future.

At present, the limit for purchase amount is INR 2,000(~$27). The Associated Chambers of Commerce (Assocham) has urged Reserve Bank of India (RBI) to increase the contactless payment limit to Rs.5, 000. Major online retailers have stopped the Cash on Delivery mode which made up at least 40% business volumes.

With almost every country increasing the limit on card payment with contactless technology, it will increase the total transactions and as well as cumulative transaction amount.

The mass rollout of contactless card and infrastructure will be the biggest growth driver. 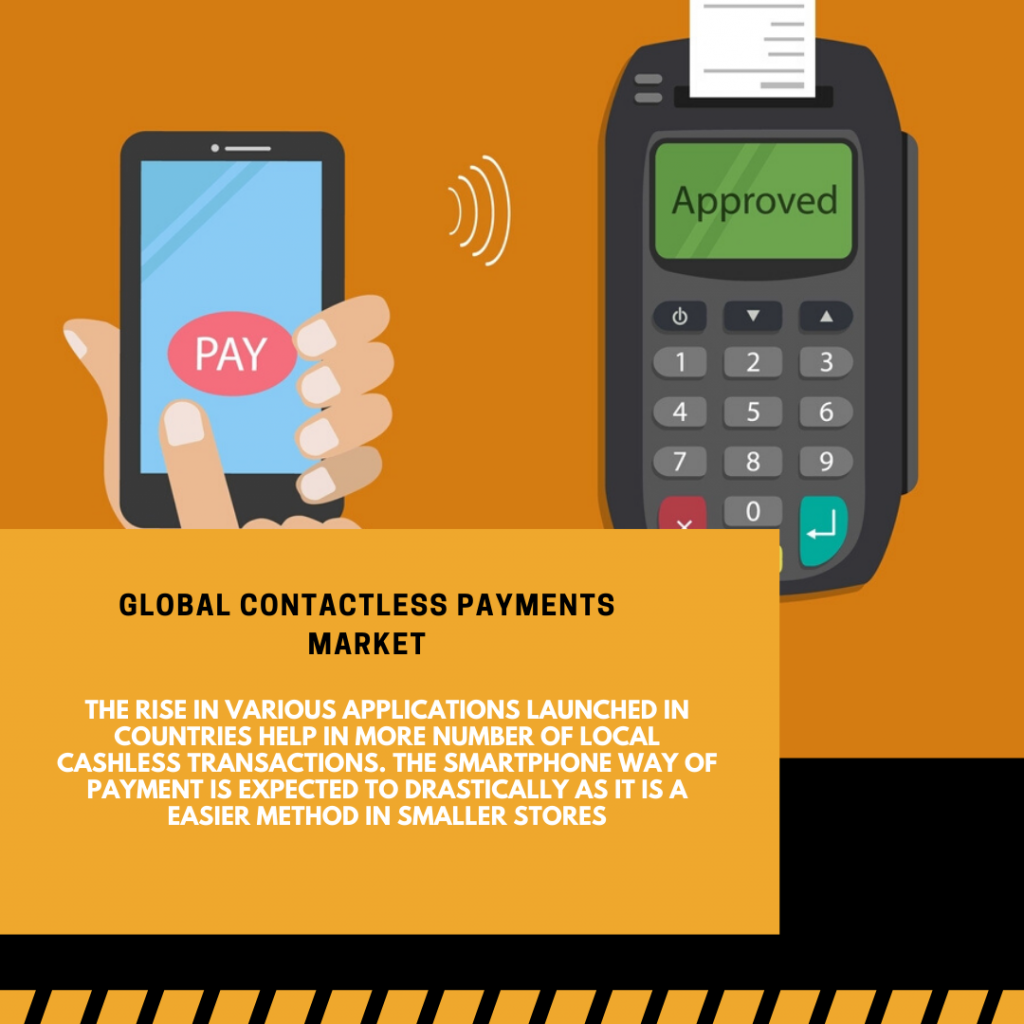 The rise in various applications launched in countries help in more number of local cashless transactions. The smartphone way of payment is expected to drastically as it is a easier method in smaller stores.

Major vendors in the contactless transaction sector are Visa (US), Mastercard (US), Gemalto (Netherlands), Ingenico (France) and Bitel South Korea).

Infineon is among the market leaders in contactless technology to the market and considered it future of payments and earlier thought the cards will cease to exist in the short term. But now it believes cards will be a permanent fixture in the payment’s ecosystem. The reason is cards are still used more than ever, and it is the main interface between the bank and the customer. 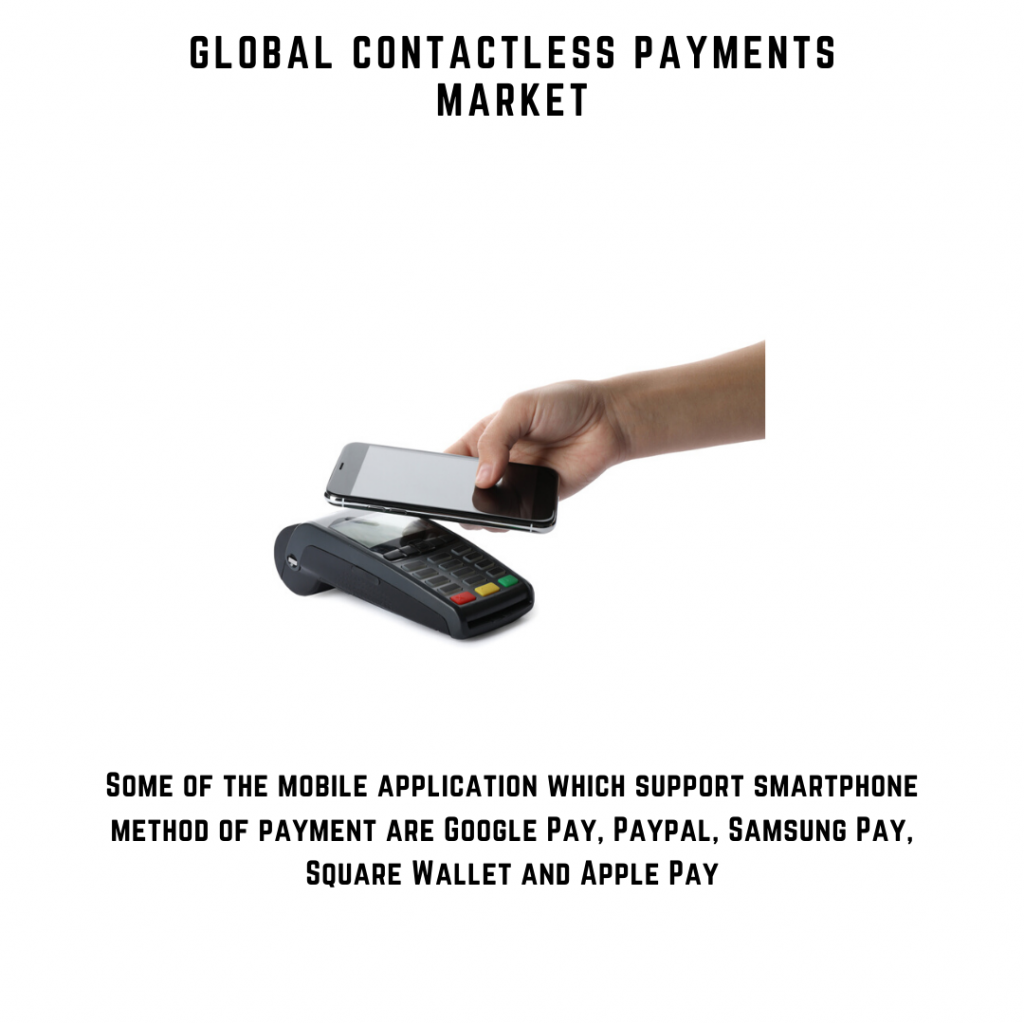 Some of the mobile application which support smartphone method of payment are Google Pay, Paypal, Samsung Pay, Square Wallet and Apple Pay.

In July 2020, Fujitsu Frontech Ltd. and fintech company Soft Space Sdn. Bhd.  entered into a memorandum of understanding (MOU) to jointly cooperate in order to boost the usage of contactless card payment in Japan. Earlier in May 2020, Japan`s JCB Co Ltd also leveraged Soft Space`s  tech expertise to develop the Tap on Mobile programme that capitalises on the wide availability of Android smartphones equipped with NFC (near-field communication).