While directed energy weapons (DEW) have long attracted military interest and funding, they are finally reaching the point of technological maturity. While questions remain over whether or not some forms of DEW can be fully operationalized, recent prototype DEW tests have shown that this sort of weapons has progressed beyond merely a theoretical notion. 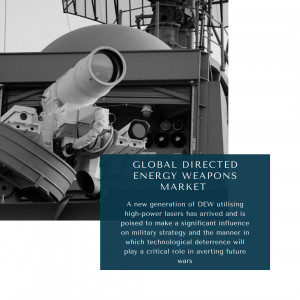 For the purposes of this definition, DEW systems are those that generate “a focused beam of electromagnetic energy” (or atomic or subatomic particles) that can be used to incapacitate, injure, or kill people directly. DEW systems can also be used to degrade or destroy objects or to render them useless. This definition does not include weapons that employ sound waves instead of electromagnetic waves to affect a target, such as sonic and ultrasonic ones.

As the underlying technology improves and is put to the test outside of labs, militaries and governments will be more interested in creating weaponry that can be deployed in space to gain a technological advantage over their competitors. Several modern armies have already made significant investments in the development of this technology.

One of the most intriguing inventions of the twentieth century was laser technology. The laser gadget is one of a kind in a lot of respects, the most noticeable of which is its incredible brightness. This has piqued people’s interest in developing the ultimate ‘death ray’ weapon that will be superior to any other.

A new generation of DEW utilising high-power lasers has arrived and is poised to make a significant influence on military strategy and the manner in which technological deterrence will play a critical role in averting future wars. In the next generation of weaponry, HPL-based aimed energy travels faster than light and is more precise than ever before.

Because of this, a wide range of hitherto unimaginable uses are now possible. Many successful experiments have been carried out by HPL–DEW researchers across the world to establish the technology and highlight its bright prospects for defence and security in the future. The demand for directed energy weapons market has increased in recent years, due to the rapid economic development and increasing security threats, across Asia-Pacific region and the increase in border disputes. The military spending of China, Japan, and India has been increasing in recent years due to increased possibilities of being targeted by terrorist attacks.

Global demand for directed energy based  weapons is being driven by the need to protect civilians from terrorist attacks and CBRN (chemical, biological, radiological, and nuclear) materials while also protecting national security. To combat threats including ballistic missiles, anti-satellite weapons, and nuclear weapons, militaries utilise electromagnetic weapons like particle beams, high-power microwaves, and rail guns. In light of the increasing investments in electromagnetic weaponry systems, the Asia Pacific region is expected to lead the market.

To build sophisticated and complicated architectures suited for military systems and equipment makers, suppliers must keep up with rapidly changing processes and technical advances. If this isn’t done, the number of contracts, agreements, and licences might be reduced, which would have an impact on the overall efficiency and dependability of directed energy weapon systems.

The Global Directed Energy Weapons Market can be segmented into following categories for further analysis.

For decades, directed energy weapons are becoming increasingly important in the 21st century as both information and space technology prove to be significant enablers for current network centric warfare (DEW). After three to four decades of sustained R&D and successful tests, the technology has matured to the point where new generation beam weapon systems may be deployed.

While high-power lasers (HPL) and high-power microwaves (HPM) have emerged as the two primary alternatives for DEW technology, HPL technology has advanced fast and has an obvious advantage for long-range military applications. The revolutionary nature of directed energy weapons means they have the potential to have a substantial impact on the worldwide power balance in the twenty-first century. HEL has gained more emphasis at present due to ease in deploy ability and low operational cost as compared to other options. It is also a very popular choice due its varied use against different targets.

In the case of an unwelcome conflict, the plan is to employ HPM sources to disrupt the enemy country’s stealth aircraft, which may be more vulnerable owing to their wave-absorbing nature. There are also plans for both sides to defend their own fighter aircraft with free electron laser (FEL) cannons against incoming missiles while also using tactical high-energy laser (THEL) weapons to shoot down the other side’s rockets and artillery fire from a variety of platforms and defence missions.

For offensive purposes, this energy-conscious nation disables the other country’s air defence and command, control, communications, computer, and intelligence systems. The HPM signals from the directed energy equipped adversary’s installations cause over 90 per cent of cruise missiles to fail en route to their targets. The large-bodied aircrafts can be modified to incorporate the DEW system and act as search and destroy platforms. There is a need to introduce new-generation area and point-defence systems to replace the ageing and obsolete systems currently deployed.

When employing conventional weapons, the idea is to use energy to push a projectile with a warhead toward a target, which then triggers a damage mechanism that releases energy in various ways, depending on the mission to produce the intended result. A different approach is used by Directed Energy Weapons (DEW) to deliver damaging or disruptive energy to the target; energy is generated from a source and directed towards the target until accumulative energy absorbed by the target reaches the threshold for an appropriate effect – disruption, repairable damage, or catastrophic destruction.

QinetiQ Technologies has been focusing upon the defence systems development on varied levels of weapons energy technologies. The main transforming technology has been collaborated with the UK Dragon fire project that is focusing on the development of latest laser weapons technology.

QinetiQ’s role is to provide the high-power laser technology for the programme and, using our testing and evaluation expertise, we will conduct trials over land and water at various Trials sites that we operate for UK MOD under the Long-Term Partnering Agreement (LTPA) to ensure a successful demonstration.

It is focusing on the development of a technology of beam combination, that is able to achieve enhanced power densities at target, reducing defeat times and increasing engagement range. The QinetiQ solution for the high-power laser has a scalable architecture that supports increasing the number of laser channels, offering a route map towards systems suitable for maritime, land and air use.

Boeing has been part of the latest development of the weapons technology involving direct energy sources on various levels of requirements. Boeing’s Directed Energy solutions provide scalable and efficient air Defense against lower-tier threats in any environment.

It is trying to integrate the technology on the grounds of the Laser focused battlefield Defense systems. The Compact Laser Weapon System (CLWS) is a modular, high energy laser system that provides proven air Defense capabilities against unmanned aircraft systems.

CLWS’ versatile design enables it to be transported and operated by a single war fighter and configured for mobile use on an array of combat vehicles – providing superior flexibility to support readiness in any environment. Currently deployed in theatre with a track record of more than 300 drones defeated in dozens of demonstrations, scenarios, and environments .