Broking is a mediator service which is based on the idea of an efficient transaction of securities. These securities range from stocks, warrants, derivatives, bonds, mutual funds, ETF etc.

This idea adapted a broader sense over the years and has evolved a completely different landscape in today’s digital world. Gone are the days when people used to rely on telephonic exchange of words with their brokers to execute their orders. While this might sound inefficient in current financial markets it has rather become impossible where trades can be as short as seconds.

The Global Brokerage Industry that is currently growing at a CAGR of 4 % serves as a catalyst to ensure the free flow of capital across economics and helps in the creation of a globalized marketplace. E-Brokerage means buying and selling of stocks, mutual funds, commodities, etc. through an online medium and obtain information through a website.

The COVID-19 pandemic has served as a blessing in disguise by giving impetus to the online brokerage as the industry registered unprecedented traffic over their trading platforms as a younger breed of millennial investor, is entering the financial markets.

The major factors that have led to such positive impact are falling interest rates and flattening real yield allowing investors to look for long term investments. Industry giants such as Interactive Brokers’ average revenue trades increased by 111 % as compared to the same quarter last year while TD Ameritrade added a whopping 6, 61,000 new funded retail accounts during the second quarter. India’s leading discount broker, Zerodha registered an impeccable 100 % growth on month to month basis while its UK counterpart IG users rose by 34 % as compared to the previous year.

The advent of the internet has not only revamped the way people used to invest and trade but also led the introduction of a “self-directed investor culture”. The major stimulus to such a culture is a set of new product offerings and technological innovations provided by the brokerage industry in order to attract millennial investors. Zero-based commission trading is one such incentive aimed at providing access to financial markets to a wider audience.

The trend-led by Robin Hood Inc in 2013 has forced even industry giants such as E*Trade, Charles Schwab to eliminate their major revenue stream in order to retain their customers and remain competitive.

Such a move although is a win situation for investors as it helps them to maximize their returns yet it is forcing such firms to either consolidate in order to strengthen their position or look for alternate avenues for revenue. Often quoted as “the Race to Zero”, such a move has led to an overall decline in the profit margin of the industry as a whole but has helped in expanding market participation across the globe. 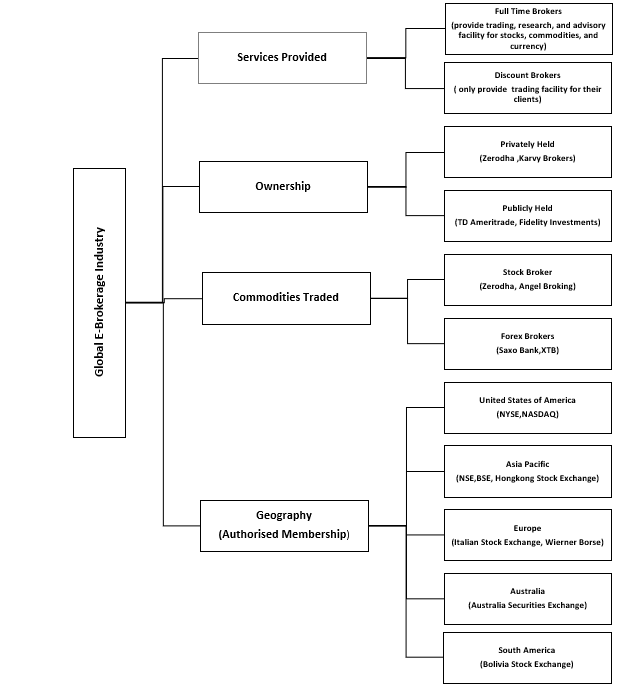 As everything is shifting to the internet, so in this industry. Now almost all brokerage houses have their online platform where the users can place their trades which are sent to the exchanges for transactions instantly. With deeper penetration of the internet and lower cost of data has catalyzed this shift from physical to virtual over the past few years. The technological change just shifted the industry to a high pace where conventional broking became obsolete.

Since the inception of E-trading, volumes, and liquidity in financial markets skyrocketed. The number of transactions executed per day has followed an exponential curve over the years and is expected to follow
the same in the years to come.

Market participation in both institutional and retail levels is increasing at a fast pace. This posed some serious challenge as with increasing participation, price manipulations also rose at a similar pace. The regulatory bodies have introduced several fundamental changes to how these trades are to be placed which the brokerages were obliged to adhere to.

Increasing participation also invited the lowering of brokerage charges as the industry flourished new players came running to grab a share in the industry at competitive prices. This led to a contracting operating and profit margins for the industry even though the demand flourished.

The given factors resulted in the erosion of institutional commission rates and brought volatility in the business model. Several conventional firms faced pressure and headwinds forcing them to restructure
their business models.

The E-brokerage market has a very good positive correlation with the economy of a country. Developed countries with a majority of the population working in the tertiary sector like USA, Singapore, and Hong Kong fosters the broking industry driven by well-established financing services in these countries.

The market participation in developed countries like the USA is around 50% of the total population while in a developing country like India it is around 3% as of current trends. With growing corporate culture and financial institutions, this figure is poised to surge and hence remains as the potential market with steady growth in years to come.

In the coming decade, the industry is set to see rapid growth in fast pace developing economies like India, whereas it may remain muted in developed countries where the market has reached a near saturation level.

With China’s ambition to become the next superpower and overtake USA in every aspect, it is posing a severe threat to robust and resilient American financial markets.

The Asia Pacific region is also characterized by the dominant presence of India where fin techs are driving the industry forward by providing customized products and solutions at the user’s smartphone. Major startups such as Zerodha, Upstox are providing lucrative offers to attract the millennial investor that accounts 34.33 % of the Indian population. The European Markets are also heading for a change as European Union plans to make amendments to its Markets in Financial Directive (Mifid) that aimed at the separation of trading and research arms of brokerage firms in order to increase the influx of foreign capital.

The “sell-side” securities industry (i.e. the brokers) faced fierce competition in the last few years as the technology drift in the industry led to structural changes that allowed new entrants to form upon the new structure whereas the conventional firms faced strain to restructure their business.

As investors are provided with a bunch of alternative platforms to trade, customer loyalty becomes transient. Research indicates that around 35 % of the customers in USA switch their trading accounts on getting better deals that too within 3 months. Leveraging the use of Artificial Intelligence and Machine Learning by brokers would aid their customers to take informed decisions based on their investment appetite.

Artificial Intelligence would a game-changer as such a tech-driven approach can help them to correlate and categorize the factors that impact daily trade irrespective of the quantum of data available. Data security continues to be a concern but as per a report by Identity Theft Resource Center, online trading platforms are secure which is evident from the fact that the number of leaks of users data .

Technology would continue to be one of the most crucial factors in the future but only those firms would be successful who can strike the right balance between automating the process with physical support and a more human-driven approach for managing relations with customers.