Electric mobility is the latest trend and development for the future of transportation all over the world. It is one of the innovations that changed the face of the future world in terms of power, comfort, noise, emission, etc. The first electric vehicle tested on Paris Street in 1881, but in early times the range, highly inefficient, resulted in a non-famous entity at that time. 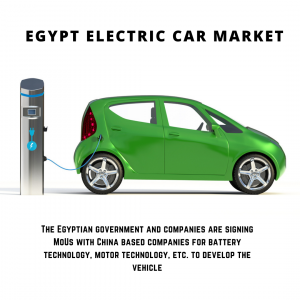 General Motors after a long time introduced the first limited production electric vehicle to the modern world market. Before that, companies like Baker Motor Vehicle, Detroit Electric, etc. were introduced to electric vehicles in the early 1900s. US, UK, France, etc. developed countries were in the front row of developing electric vehicles, while Egypt came much later in the race of building their own EV by a joint venture between El Nasr Automotive Manufacturing Company and Chinese Company named Dongfeng Motor Corporation.

For countries like Egypt the Electric car market is new for their people, less than 200 Electric cars are currently present on Egypt’s Road that too imported Models. The country has started to develop the technology for electric cars and vehicles, so companies are coming forward by joining ventures between foreign companies. The entry of electric cars will introduce other market opportunities to different segments of the market like Battery swapping stations, charging stations, battery manufacturers, motor manufacturers, etc.

Due to new market, the Egypt has higher price of Electric cars as compared to conventional engine car, this factor is responsible for not able to attract the attention citizen, the reason for high electric cars prices because there is no local manufacturer present in current scenario and all cars are imported which increases the price of vehicle.

IMPACT OF COVID IN ELECTRIC CAR MARKET IN EGYPT

COVID has affected the production and development process all over the world. The countries which were trying to develop the next generation technology for the development of their country also experienced the back lag in their domain.

The governments are providing the help from their end whosoever needs to overcome this sudden wall of financial and social problems. As most of the countries have decided to reduce their carbon emission by 2030, every country is trying their best to introduce the non – conventional vehicle to the public market and to attract them they are trying every possible method.

As a new growing market it has the potential to attract the customer locally and globally as it is the second largest market in Africa. The foreign company’s investment and joint venture has a lot of scope in future for overall electric vehicle manufacture, the mass scale production of electric cars is expected to start from 2022 by joint venture of Dongfeng Motor Corporation and Al Nasr Automotive Manufacturing Company, the company has already started testing the prototype for the same. Since China is one of the biggest manufacturers and suppliers of Electric vehicles in the world.

The Egyptian government and companies are signing MoUs with China based companies for battery technology, motor technology, etc. to develop the vehicle in the starting phase. As the imported electric car has a higher price range after including overall selling cost. This is the main dis – advantage of electric cars which has to be overcome by the government.

The development of electric cars in the country will also develop the auxiliary industry in the country as the first company for charging infrastructure like Infinity – E. The country has also decided to install thousands of charging stations across the country to promote the electric car. It is also advantageous for new startups to come to the Egyptian market. The foreign company also has some potential to introduce their new model in the Egyptian market of Egypt.