Aircraft propeller engines powered by electric motors are aimed to reduce pollution in the air. Due to the fact that gasoline engines need to be serviced 10 times more often than electric motors, electric aviation also implies fewer (every 2,000 hours versus 20,000). Electric planes will be limited to modest commuter trips due to the weight of the batteries. 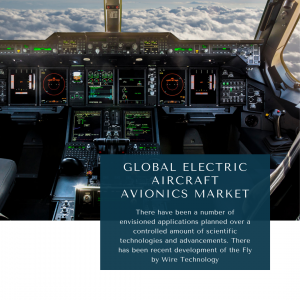 The blend of the terms “aviation” and “electronics,” the avionics installed in an aircraft or spacecraft can include engine controls, flight control systems, navigation, communications, flight recorders, lighting systems, threat detection, fuel systems, electro-optic (EO/IR) systems, weather radar, performance monitors, and systems that carry out hundreds of other mission and flight management tasks.

Much of the progress in setting the stage for the electrification of aviation directly relates to the rapid development of batteries and electronics pursued by the automotive industry over the last couple decades. The increasing range, lowering costs, and growing customer appeal in the electric automobile sector since the introduction of the first mass-market hybrid electric vehicle.

As a result of using an electric propulsion system, These systems are also more efficient in terms of energy use. How electrical energy is created is the determining factor in whether or not this is a greener technology. Electric aeroplanes have an advantage in nations where renewable energy is mostly employed in manufacturing.

The aircraft industry is also under government pressure to drastically decrease emissions. According to the Norwegian Ministry of Transport and Communications, by the year 2040, all short-haul planes will be powered. There’s no denying that aviation can’t completely switch to electric power, but there’s a strong expectation that it will be viable for regional flights, and for sure.

The United Nations has brought upon a combined platform of regulations and execution of the efforts to better reach the required efficiencies. The Carbon Offsetting Scheme for International Aviation (CORSIA) is a voluntary initiative of the United Nations International Civil Aviation Organization that will commence in 2020. By purchasing carbon offset units on the worldwide carbon market, CORSIA aims to restrict international aviation-related carbon dioxide emissions at 2020 levels.

Within the European Union (EU), the EU Commission expects that the aviation industry will deliver technology solutions that leverage sustainable energy supplies to mitigate impacts on the climate. Europe has a global lead in the implementation of international standards covering all aviation issues, including interoperability, the environment, energy, security and safety. This leadership ensures that the global regulatory system enables market access and free, fair and open competition. It has been marking its considerable operations in integrating the safety systems and critical infrastructure mobilisation within the requirements of electric aircrafts.

The Global Electric Aircraft Avionics market can be segmented into following categories for further analysis.

There have been a number of envisioned applications planned over a controlled amount of scientific technologies and advancements. There has been recent development of the Fly by Wire Technology. Since the controls are enhanced by electronics rather than being solely manual, this new tiny computer can be held in one hand compared to equivalent technologies placed on bigger aircraft that are around the size and weight of a fully loaded suitcase.

The recent innovation in the switching and networking channel of development within the avionics section of operations. The development has been done in the specific operational safety of the applications. The state-of-the-art, ruggedized avionics Ethernet switch unit is operated on the functionality to support the complete protocols of networking on a single desk environment. The Materialistic Lightweight and ruggedized unit is mountable directly to airframe structure.

Electricity is one of the most important components of contemporary aircraft, and it is In addition, they make it easier to operate in a safer, more pleasant Projects like as Clean Sky or the ICAO Global Coalition for Sustainable Aviation have resulted in rigorous rules aimed at reducing pollution and noise caused The complete electric propulsion of the aeroplane can reduce both noise and pollution.

Honeywell Conglomerate has been one of the most competing corporations on a multi-dimensional scale of operations. It has recently introduced itself into the sustainability aspects of production in the avionics for electric aircraft. The Company has developed a Compact Fly by Wire technology to be integrated into the electric airways across the world. Fly-by-wire computers act as the “brains” of an aircraft’s flight controls by operating them electronically and can be found inside nearly all large fixed-wing aircraft today. The compact version from Honeywell has features derived from decades of expertise in fly-by-wire systems for airliners.

GE Aviation has been moving towards advancements in the Avionics section of operation in the electric aircrafts to provision better navigation and networking systems. GE’s open architecture integrates the computers, networks and interfacing electronics, and hosts avionics and utilities functions. It has recently introduced the VCompS 3100 which acts as a computing platform with enhanced avionics capabilities including on-aircraft 615A data loading, fast restart, and integrated Built-in-Test (BIT). Its rugged design allows for operations at extreme temperature, altitude, and humidity conditions with protection from electro-magnetic interference, power transients, and lighting strikes.