To replace fossil fuels, aeroplane engines can use electric and hybrid-electric drive systems. As soon as this technology is perfected, we will be able to minimise aeroplane pollutants as well as fuel consumption, as well as create aircraft that are extremely quiet. Light sport and training aircraft are already powered by electricity. To make electrified aircraft an efficient and commercial reality, several advanced technologies and innovative features are being developed for the electric power and thermal management systems. 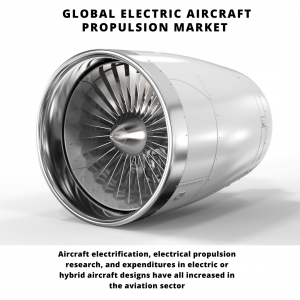 To realise the full potential of electrical propulsion aviation, new rules for new technologies, new platforms, and new aviation systems will need to be put in place quickly. When it comes to the development of new electric aircraft technologies, each one will need to be backed by regulations before it can be used. When it comes to certifying and confirming the usage of more electric aircraft systems, for example, regulations will play a role, as would any advancement in electrical propulsion.

A safety and dependability problem is at the heart of the regulatory process. Introducing autonomous flying systems and the potential for urban commuter air transportation in an era of growing cyber-security concerns becomes much harder when software and systems are susceptible.

In recent years, electrification of aviation systems, electrical propulsion research, and investment in electric aircraft have all seen steady increases. Additionally, electrification might open up the possibility of more energy-efficient aircraft and whole new designs and use cases in addition to reducing emissions.

It’s clear that the transportation industry has made a concerted effort to reduce its environmental effect in recent years. Aircraft operators travelling between EEA airports are impacted by the EU’s 2003 “Greenhouse Gas Emission Allowance Trading” scheme (ETS). Carbon Offsetting and Reduction Scheme for International Aviation (CORSIA) will also begin its trial phase in 2021. As of 2020, CORSIA aims to offset yearly increases in aircraft carbon dioxide emissions over the previous year’s level.

A big prospective market for aeroplane electrification is in the European Union. France, Germany, the UK, and Switzerland, among others, are seeing a rise in the demand for electric aircraft owing to an increase in carbon emissions as a result of increasing passenger traffic. Organizations that oversee transportation safety, such as EASA, EDA, UK Civil Aviation Authority, and European Air Transport Command, among others, play a key role in tackling concerns like carbon emissions and noise pollution. In Norway, policymakers have called for all short-haul flights to be electric aircraft propulsion implementation into manufacturing capabilities by 2040.

Urban air mobility with electric propulsion (UAM) and hybrid-electric regional aircraft (REA) are two commercial sectors that are currently in development. First-generation tiny gadgets are projected to enter operation over the next 10 years. Finally, the last one will gradually enter service, starting with small aircraft, based on advances in energy storage and fuel cell technology as well as aircraft design and hybrid architecture integration. UAM appears to be better suited to an all-electric design. To meet environmental targets for 2030 and 2050, hybrid turbo-electric aircraft with dispersed propulsion and boundary layer ingestion appear to be more successful.

The Global Electric Aircraft Propulsion market can be segmented into following categories for further analysis.

Aircraft electrification, electrical propulsion research, and expenditures in electric or hybrid aircraft designs have all increased in the aviation sector. Liquid hydrogen research for civil aircraft is also under progress, with a number of projects now underway. Climate change, local air quality, and noise may be addressed by electric, hybrid, and hydrogen aircraft.

The most recent development has been the analysis of jet fuel being replaced with electricity or hydrogen, the climate change consequences of aviation can be significantly reduced, since electric or hydrogen aircraft will not emit CO2 as a result of burning fuel. To be sure, such CO2 advantages will only be realised if the electric energy or hydrogen is obtained from sources that emit less carbon dioxide.

Besides electric and hydrogen propulsion, there are a variety of methods in which electricity and hydrogen may be used in aeroplanes. According to the ICAO’s Rules of Thumb3, electric taxiing (E-taxi) may save approximately 33kg of CO2 every minute of use. The employment of electric motors as a supplemental thrust source during the take-off phase allows for the use of smaller and more efficient jet engines throughout cruising.

Recent years have also seen significant advancement in the VTOL category with passenger capacities ranging from one to five, MTOWs ranging from 400 kg to 2200 kg, with anticipated flying ranges of 16 to 300 km. They will solely be powered by electricity and are expected to enter service in the 2020-2025 timeframe. There has also been the Cryogenic Hydrogen based propulsion of the electric aircrafts combination. The Tupolev Aircraft has been part of the start of development in the propulsion systems in the electric aircraft.

When evaluating the limits of present technology, one might explore replacing existing aircraft engines with an all-electric propulsion system and determining what features such systems would need in order to produce a similar level of aircraft performance. Electrically propelled aircraft will need power electronics to convert, switch, and condition the power generated. Not only should power electronics be able to execute these duties with little electrical loss, but they should also generate as little heat as possible while doing so.

Magnix has been involved in development of latest propulsion technologies for electric aircrafts with major focus placed upon development of electric propulsion-based units in series of production mechanisms. The magniX EPUs were developed using key learnings from thousands of hours of robust ground testing and flight testing on aircraft such as the eBeaver and eCaravan. They include a series of enhanced features to enable a simplified, reliable, and convenient adoption of all-electric power. The magni 350 EPU and magni650 EPU have been part of the most recent development within the electric aircraft requirements. The magni650 electric propulsion unit (EPU) is an 850 SHP / 640kW / 3000 Nm – class EPU. Each EPU includes a magni650 motor, 4 X magniDrive-100, and the closed-loop integrated thermal management system.

Rolls Royce has been part of the most required development in aircraft propulsion within the electric aircraft requirement. The company has developed the H3PS Project within the propulsion class segment of RRG30 Product which operates on a propulsion system of  a 30 kW electric machine that can be used as a starter motor, give additional boost to the engine during take-off and climb, and generate electricity to recharge the batteries during cruise flight.

NASA and Boeing have been involved in development of New Electric propulsion systems of electric aircrafts at various levels of integration. Boeing SUGAR Freeze: fuel burn reduction 56% for 900-mile mission, utilizes a truss-braced wing combined with a boundary-layer ingesting fan in an aft tail cone to maximize aerodynamic efficiency. The aft fan is powered by a solid oxide fuel cell topping cycle and driven by a superconducting motor with a cryogenic power management system.