A turbo generator is a turbine connected to a generator, which together transforms the mechanical energy of a moving fluid, such as liquid water, steam, natural gas or air, into electricity. In a turbine, blades are used to rotate and drive the generator through a shaft. Rotor and stator make up the generator. Rotor is a moving element, while stator is a fixed part. 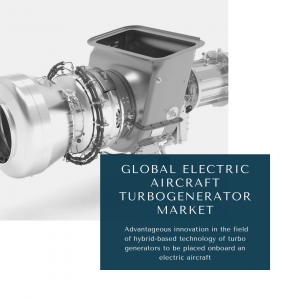 On the rotor, electromagnets are applied to the outside layer, while copper wire coils line the stator’s inside. Rotation generates an oscillating magnetic field in the stator, which induces an alternating current. With the advent of the more electric aircraft (MEA) initiative, electric power systems are progressively taking the place of pneumatic, hydraulic and mechanical power systems. Over time, this trend has led to an increase of required electric power, particularly for larger aircraft

Small turbo-generators driven by gas turbines are often used as auxiliary power units (APU, mainly for aircraft). In steam and gas turbines, turbo generators are used to increase the shaft rotational speed of the turbine shaft. The rotor of a turbo generator is a non-salient pole type, generally with two poles (1800 or 3600 rpm with four or two poles at 60 Hz). A turbo generator’s spinning components are subjected to severe mechanical strains as a result of its high-speed functioning.

In recent years, electrification of aviation systems, electrical propulsion research, and investment in electric aircraft have all seen steady increases. Additionally, electrification might open up the possibility of more energy-efficient aircraft and whole new designs and use cases in addition to reducing emissions. Conventionally, aircraft utilize fuel-burning engines to mechanically turn rotors, fans, or propellers. On the other hand, several designs use distributed electric propulsion where electric motors are turned off for vertical take-off.

Normal aeroplanes use a variety of pneumatic, hydraulic, mechanical, and electric power sources to power their non-propeller systems. The drawbacks of these systems include a poor conversion rate of fuel to energy and the possibility for leakage of corrosive fluids, as well as a high fire hazard rate. Electricity is used to power most non-propulsive aircraft systems. Electric design is power optimized for maximum performance efficiency while using minimal electricity.

As a result of increased interest and competition in the automobile and light truck markets, as well as stricter environmental laws being applied to all types of diesel-powered vehicles, turbo generator technology is quickly evolving in both the United States and in Europe. For example, diesel engines utilised for industrial purposes, such as portable generators would certainly benefit from a variety of technical advancements. For example, a reduction in size and weight, fuel consumption, noise and vibration appear to be closely related to developments in military generator technology

The Global Electric Aircraft Turbo generator market can be segmented into following categories for further analysis.

By Sub Systems of Usage

Aircraft electrification, electrical propulsion research, and expenditures in electric or hybrid aircraft designs have all increased in the aviation sector. Liquid hydrogen research for civil aircraft is also under progress, with a number of projects now underway. Climate change, local air quality, and noise may be addressed by electric, hybrid, and hydrogen aircraft.

There has been a considerable advantageous innovation in the field of hybrid-based technology of turbo generators to be placed onboard an electric aircraft. The unit would specifically design to supply the high-powered electric motors and to recharge the batteries of urban mobility aircraft, such as hybrid-electric cargo drones, air taxis, and commuter aircraft. The Prospects of designing the new turbo generator to run on jet fuel, diesel and biofuel made from sustainable alternatives to fossil fuels. In addition to conventional jet fuel and diesel, the latest innovation will be able to run on aviation biofuel including Honeywell Green Jet Fuel, which is chemically similar to fossil fuel but made from more sustainable alternatives.

When evaluating the limits of present technology, one might explore replacing existing aircraft engines with an all-electric propulsion system and determining what features such system would need in order to produce a similar level of aircraft performance. Electrically propelled aircraft will need power electronics to convert, switch, and condition the power generated. Not only should power electronics be able to execute these duties with little electrical loss, but they should also generate as little heat as possible while doing so.

Honeywell International Inc. has been part of the recent development in the turbo generator requirements for electric aircrafts. Despite weighing 280 pounds, the Honeywell 1-Megawatt generator can power a whole neighbourhood block. Combined with the Honeywell HGT1700 auxiliary power unit, presently installed on every Airbus A350 XWB, this generator will provide a turbo generator 2.5 times more powerful than the existing version. Additionally, it will be able to run on traditional jet fuel and diesel as well as Honeywell Green Jet Fuel, which is equivalent to fossil fuel but manufactured from more sustainable options. Using Honeywell’s turbo generator, heavy-lift freight drones, air taxis, or commuter aircraft may run high-power electric motors or charge batteries.

Turbotech is involved in the generation of latest technology-based turbo generator production. The Turbogenerator is an onboard electrical genset and is a powerful enabler for electrical propulsion architectures. Turbotech develops 2 power classes of turbogenerator: 55kW and 90kW. TG-R55 / TG-R90 are the first onboard electrical gensets dedicated to the hybrid-electric aircraft industry. It has a plug-and-play  approach, combined with low operational  costs, optimised fuel consumption and  reduced CO2 emissions, makes it the most  reliable solution in the hybrid-electric aircraft  sector today. Turbogenerators TG-R55 / TG-R90 generate electric power onboard and paves the way to hybrid-electric architectures. Used in conjunction with batteries, it can offer up to 10 times more range than a full-electric plane.