The number of shipments transported by Courier, Express, and Parcel (CEP) services has risen substantially in recent years. Many consumers purchase items online with the expectation of receiving them quickly, and more than one out of every ten products is returned to the retailer. Delivery trips, which are mostly driven by diesel vehicles, contribute to increasing traffic congestion and air pollution, particularly in cities. 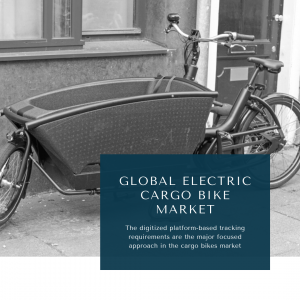 When evaluating the environmental consequences of e-bikes throughout their entire life cycle, lead contamination from industrial processes stands out as a major threat to the mode’s environmental sustainability, even with over 100 percent recycling rates. Large batteries are changed every 1–2 years, and a medium-sized e-bike emits 420 milligrams (mg) of lead per km through mining, smelting, and recycling.

The current problems are mostly the expense of the electric cargo bike. They are costly, making it difficult for consumers to acquire an electric cargo bike. It also becomes a difficulty for businesses to provide a service that is financially sustainable. The room for the bike is the second big difficulty. A cargo bike requires more storage space than a conventional bike.

An electric bike, often known as an e-bike, is a pedal cycle that is powered by a motor. They frequently resemble traditional pedal cycles but incorporate a rechargeable battery and a motor, which alleviates part of the pedalling load. E-CBs are viewed as having special potential in this area, as they allow for bigger weights and longer distances than simply human-powered cargo bikes, addressing major drawbacks of cycle freight such as range, payload, and driver fatigue.

For a bicycle with an electric motor to be recognized as a bike, the electric motor must only provide electric assistance when the pedal pressure increases. That is, the engine will simply increase the power generated by the pedals. In combination with new concepts in the organization of mobility and transport, they can contribute significantly to greater sustainability in transport.

Because the market for currently available electric automobiles, particularly bigger electric vehicles, is still restricted, significant emphasis is being focused on the introduction of smaller electric vehicles such as electric cargo bikes (E-CBs). The usage of these cars is now being explored as one intriguing potential for more sustainable urban transportation configuration.

The scenario in the United States is that the employment of alternative fuels and vehicles for inner-city deliveries is a “low effectiveness” urban freight strategy with “medium application to [the] United States.” The disparate assessment of cargo bikes’ potential in inner-city courier services is undoubtedly a reflection of the huge disparity. In all, however, there is hardly any knowledge regarding the potential and conditions of E-CB use in city-centre commercial transport today.

The Global Electric Cargo Bike Market can be segmented into following categories for further analysis.

The European experience demonstrates that a wide range of variables must be considered when assessing the potential of cargo bikes. Along with the technological and infrastructural conditions, they include supply-side business structures, geographical and temporal demand patterns, and company and driver acceptance of the new form of transportation.

There are a varied levels of integration placed into the electric cargo bike requirements in terms of the technological implementations. The mid-drive system, with a low and central center of gravity for a balanced load, provides a more natural feeling similar to riding a traditional bike. A well-balanced mid-drive equipped Yuba cargo bike will make accelerating, stopping, and the ride in general more stable and pleasurable than bikes equipped with outdated technology, especially when carrying big loads.

The pedal-assist system delivers unparalleled efficiency between the rider’s pedal stroke and the mid-drive unit, resulting in a greater range per battery charge. Unlike hub motors, which only accelerate one wheel, the power generated by a mid-drive unit is immediately transferred to the chain and works in tandem with the rider’s pedalling cadence.

The digitized platform-based tracking requirements are the major focused approach in the cargo bikes market. Shipments are aggregated to trip chains in a multistep procedure in order to collect daily mileages from trip data records. Trips required to include information such as the origin and destination (OD) addresses (which Nokia Maps geocoded) as well as the timestamps of pickup and drop-off. Individual messenger ID and date are used to group selected journeys.

There has been constant technology adoption and automated control system implementation within the two-wheeler market. The major stakeholders are involved in implementing new strategies of technology to have a better and safer ride for the customers. The usage of E-CBs in courier services is dependent on the current shipping structure and means of transportation, notably bicycles and vehicles. The examined courier service pattern in dynamic cities is focused in heavily populated core areas.

Electric cargo bicycles are available in two variants. The first type of bike is a front-loader, also known as a bakfiets or Long John, which suspends a luggage box between the rider and the front tyre. A long tail configuration, on the other hand, extends the back end of the bicycle to accommodate more bodies and gear.

The Tern GSD S10 has been one of the latest integrations into the electric cargo bikes requirements. It’s the length of a regular road bike, but with a max weight capacity of up to 440 pounds. The rack is long enough for two Thule child seats. Tern recently updated the GSD to the new GSD G2, which has a new, beefier step-through frame and an upgraded and more powerful Bosch Cargo Line battery.

Yuba has also been involved in integration of new electric cargo bike implementations through new generation drive systems. It is powered by a Shimano e6000 Shimano Steps motor. This clever, waterproof system rides like a dream. It has up to 50 newton-meters of torque and downshifts automatically when you stop and start. The battery is projected to have a range of up to 93 miles on a single charge.