Vertiports are ideally, take-off and landing pads would be built or located in the city’s centre and serve as main sites for cargo and passenger on- and off-boarding, as well as take-offs and landings for both. Since the first and last leg of the passenger journey and cargo delivery should be integrated with other modes of ground transportation such as trains or subways, operators would need to place them in and around primary destinations such as central business districts, shopping centres, and other transportation such as trains and subways. 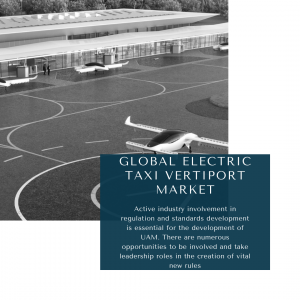 Vertiports could be equipped with fast charging/ refuelling systems, have basic security checkpoints, and the capacity to carry out minor MRO operations, but they will likely not feature parking spaces for long-haul eVTOL or full-fledged MRO stations. For large numbers of passengers, however, customer waiting lounges and ground employees may be needed to manage smooth boarding—and for fire safety systems, access control systems, and real-time surveillance systems.

Some VTOLs (vertical take-off and landing aircraft or flying taxis) are at various phases of development. Before UAM to take flight, VTOLs must be proved safe and dependable, the air traffic control system must be changed to handle them, and the public must embrace this new form of transportation – and it must be inexpensive. There’s also the issue of landing, recharging, and taking off with fare-paying passengers, which requires a well-developed infrastructure. Vertiports, please.

In metropolitan areas and key transportation hubs, micro-scale airports are already taking shape to fill in the missing pieces of the puzzle on the ground. A number of cities are showing significant interest in vertiports which includes the most recently involved Singapore Government Authorities to have the adoption of technology of vertiports for taxi services being mobilised on a rapid pace. In addition to Los Angeles, Sky ports is working with about a dozen additional megacities across the world to be the first to deploy commercial air taxis.

There is a large scale EOI ( Expression of Interest ) running from a number of cities across the globe, as well as from two UK airports which are interested in integrating air taxis with their core infrastructure, that has been aimed at adding the concept of urban airports (as he prefers to call vertiports) gaining an aviation foothold in places previously considered unattainable.

With new innovations taking place in the vertiport deployment feasibility, there has been an emerging trend in the market technology noticed in the recent days. As a floating port, Vertiport makes use of the closeness of rivers in major cities. They believe that a waterborne method allows for remote manufacturing, with the vertiport’s final assembly simply floating and being anchored in place. An alternative idea is to create temporary VTOL destinations outside of cities using existing infrastructure such as roof space, parking lots and heliports, which may be repurposed to relieve traffic congestion.

The Global Electric Taxi Vertiport market can be segmented into following categories for further analysis.

In order for the UAM sector to flourish, infrastructure and technology must be aligned from the start. It is possible to simplify and improve the regulatory requirements for vertiports by matching them with the latest developments in vehicle airworthiness standards. In the EASA VTF, aerodromes and airworthiness teams work jointly on novel solutions, and this should be the default approach everywhere before rules come into effect and become more difficult to alter in the future.

Active industry involvement in regulation and standards development is essential for the development of UAM.  There are numerous opportunities to be involved and take leadership roles in the creation of vital new rules.  Skyports takes its role seriously as an industry leader in UAM ground infrastructure by proudly playing an active role in regulatory developments. There have been numerous research-based developments being established under the Cargo and Passenger Capacity of Vertiports.

The goal of the research is to develop technology that will support safe, secure, resilient, and efficient heavy-lift UAS cargo delivery and passenger carrying. This level would consist of complex operations and automated systems, consisting of hundreds of simultaneous flights. Individual aircraft may have the option of being flown by an onboard pilot, flown using simplified vehicle operations or by someone at a command station piloting or monitoring multiple aircraft at once.

Skyport has been the lead developer in the design and mobilisation of high technology based vertiports across the globe. In the most recent collaboration, It has partnered with Voloport, to have the World Congress platform used for collaborative efforts. The European Aviation Safety Agency (EASA) has established a Vertiport Task Force (VTF) to develop a Vertiport Design Manual (under Rule Making Task 0230) to provide guidance material to European Union Member States on the approval of the design of vertiports.

Lilium has also made its entry within the designing and operational aspect of vertiports. It has unveiled its design guidelines for modular vertiports that could be placed on top of office blocks, car parks or shopping centres. The modular and prefabricated structures were designed as a blueprint for developers that want to incorporate a vertiport into upcoming projects or existing buildings. It has planned its operational readiness by 2025 within all of the major cities. Each vertiport will include three major elements: a take-off area, which will be based on current heliport regulations; parking bays where passengers will embark the taxis and the vehicles will be charged; and the terminal building.