EVs initially appeared in the mid-nineteenth century, when electricity was one of the favoured ways of motor vehicle propulsion, giving a degree of comfort and simplicity of operation that gasoline automobiles of the period could not match. Automobile interior package design practices have been greatly aided over the past thirty years by the development of a variety of standardized tools to represent the behaviour of vehicle occupants, particularly drivers.

This would require the Vehicle to be replaced with a varied class of specially designed engines depending upon the source of power being generated within the Vehicular Drivetrain System. As compared to IC Engines based Vehicles, the technology which is to be integrated into the renewable energy-based vehicles is focused on catering to the requirements of Light Weight vehicles by usage of Various Combinations and Lighter Metals. 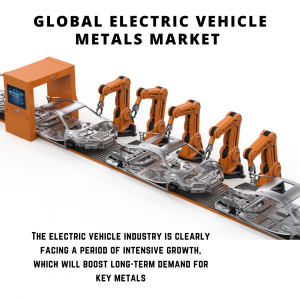 EV revolution will strongly impact metals demand, but is difficult to quantify in terms of timing/volume. As compared to petrol and diesel engines, the consumption of metals produced by EV Companies in the manufacturing of EV engines is much more intensive. The process requires 2 to 27 times more of nickel, 2 to 4 times more of copper, and 12 to 17 times more of PGM (the latter are particularly important for fuel cell vehicles).

Limitations in the supply of critical metals needed to produce efficient and high-performing electric vehicles. Production of some of these metals, such as nickel, praseodymium, neodymium, cobalt, dysprosium, and lithium, would have to scale threefold in the coming ten years to meet projected global electric vehicle demand.

The demands placed on future electric vehicle cockpits are very considerable: Car drivers expect the same kind of seamless connectivity that they have become accustomed to when using their smartphones; the automotive industry’s safety and security standards are very stringent; and vehicle manufacturers want highly versatile systems that cost as little as possible.

The electric vehicle industry is clearly facing a period of intensive growth, which will boost long-term demand for key metals. However, so far experts have not come to a consensus on market growth projections. One of the most likely drivers of EV expansion will be government policy in many developed countries committed to introducing a broad range of incentives to promote the production of green cars, up to imposing an ultimate ban on the sale of cars with internal combustion engines.

For the past 20, 30, 40 years, fuel economy has been the most important element in automobiles and aeronautics. Cars were made using a lot of iron throughout the 1960s and 1970s. They functioned properly, but they were hefty, and as fuel prices climbed, they had to be replaced.

There is a whole separate issue with electric cars (EVs): batteries are hefty. The overall weight of an EV’s power pack is more than that of a gasoline or diesel car’s engine. All of this adds fuel to the effort to decrease vehicle weight and develop new materials. Steels and irons were the base material for a long time and there are hundreds of different variations. As other materials have come to the EV auto industry they have got much better.

Given the increasing demand for metals, increased mining production can be expected. This expansion can lead to severe local environmental and social issues, making it imperative that mining is done as sustainable and fair a manner as possible.

The Global Electric Vehicle Metals Market can be segmented into following categories for further analysis.

By EV Battery Based on Metals Type

Critical metals are also used as leverage to exert political influence. Moreover, mining activities are sometimes related to human rights violations and frequently cause significant environmental damage. With growing worldwide demand for critical metals, the risk of geopolitical conflicts increases as well. Supply constraints or temporary disruptions could delay the large-scale deployment of sustainable energy technologies (such as electric transport).

The reliance on certain metals can be reduced by replacing alternative metals for key metals. From a social standpoint, this looks to be the simplest option, but it is difficult and may impair performance and efficiency. Critical metals, such as cobalt, are used in the production of electric cars, for the motor and batteries for example. In the last few years, there has been a lot of media attention on the growing worldwide concerns about the increasing dependence on these critical metals.

The elements neodymium, dysprosium, and praseodymium – which are needed for the motors in electric cars – are also needed to produce wind turbines. The scarcity of these elements will create tensions between different sustainable technologies. For the electric motor, a substitution rate of neodymium, dysprosium and praseodymium which equals the cobalt substitution rate for batteries. Consequently, the number of critical metals per vehicle lowers by 30% in 2030, compared to 2020.

Approximately 80% of all nickel output is currently utilised in alloys. Approximately 90% of new nickel sold each year goes into alloys, with the remaining two-thirds going into stainless steel manufacturing. With the advent of the nickel cobalt battery in the 1990’s (think camcorder and the Prius), and the subsequent advances in the use of nickel both in Lithium-ion EV batteries as well as in nickel-cobalt batteries, nickel is now playing a fundamental role in delivering low-cost, long range vehicle batteries.

BHP Group has been focusing on manufacturing of Nickel Metal for EV Integrations at various levels. Nickel has been making a vital contribution to the lithium-ion batteries that power electric vehicles. When the battery has more nickel, the vehicle can drive for longer. A 60kwh NMC811 battery needs 5kg of cobalt, 5kg of manganese, 6kg of lithium and 39kg of nickel. BHP’s open-cut and underground operations in the Northern Goldfields mine nickel sulphide ore, which is crushed and concentrated at two massive nickel concentrators utilising nickel sulphide flotation technology.

The AMG (Advanced Metallurgical Group) is a well-known global supplier of essential metals (such as vanadium, tantalum, niobium, and lithium), mineral products (such as graphite), highly specialised furnace systems, and related services. Largo Resources has been using vanadium for battery electrolytes which could be twice as profitable as supplying it for steel production, which is currently the major industrial use for the abundant metal.