Even at modest speeds, traditional combustion engine cars generate engine noise. When a vehicle is out of sight, pedestrians and other traffic participants often know it by sight and aural recognition of tyre noises and other produced noise. Electric vehicles (EVs) do not produce engine noise. 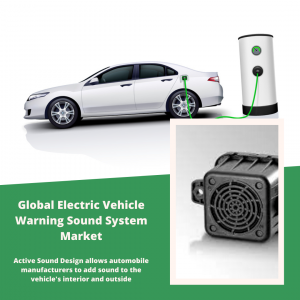 When driving at low speeds and before the traditional internal combustion engine (ICE) kicks in, hybrid electric vehicles (HEVs) or plug-in hybrid electric vehicles (PHEVs) move virtually silently. When travelling at less than 19 mph, these cars are difficult to hear. At higher speeds, tyre noise becomes more prominent. An electric vehicle warning sound system (EVWSS) generates a sequence of noises that notify pedestrians to the presence of EVs, HEVs, and PHEVs.

The driver can activate warning noises (similar to a car horn, but less urgent); nevertheless, the sounds must be engaged automatically at low speeds. These noises range from synthetic tones to genuine sounds that resemble engine noise and tyre noise. Some government officials found warning sound devices required since all-electric cars create less noise than typical combustion engine vehicles, making it more difficult for pedestrians and cyclists (particularly the blind or short-sighted) to be aware of their presence.

Clean transportation has a critical role in the fight against climate change, because fossil-fuel-powered motor vehicles, trains, and planes account for approximately one-quarter of the world’s energy consumption – and about the same proportion of global carbon-dioxide emissions. These emissions are harmful for both the environment and for human health.

Considering the sales of full electric vehicles and hybrid electric vehicles have increased in several countries, some members of the blind community have expressed concerns about noise reduction when those vehicles operate in all-electric mode, as blind people or the visually impaired consider the noise of combustion engines to be a helpful aid while crossing streets and believe quiet hybrids could pose an unequalling risk.

Global regulatory authorities are considering laws to create a minimum level of sound for PHEVs and HEVs when running in electric mode, so that visually impaired persons, walkers, and cyclists may hear these cars coming and identify from which direction they are approaching. The European Commission published a recommendation for acoustic vehicle warning systems in 2011. (AVAS). The objective is to make suggestions to vehicle manufacturers for a system that will deliver an auditory signal to walkers and vulnerable road users.

An environmentally adaptable warning sound system is conceptualized and researched to meet the demand for both minimizing noise pollution and ensuring that the warning sound is suitably heard in any noisy situation. The system incorporates an adaptation algorithm that calculates auditory masking thresholds as a result of a possibly changing acoustic environment and then uses this knowledge to adjust.

The purpose of an AVAS system for electric cars is to notify pedestrians, cyclists, and/or nearby residents who use personal mobility vehicles, particularly blind or visually impaired people who require a sound stimulus to detect and understand a vehicle is nearby. AVAS sound designers have freedom to design their sound signatures. To give flexibility to vehicle manufacturers, legislators have given several options to choose the test site, and the operational conditions of the test.

The Most recent technology being integrated into the market of sound systems is the frequency shift test for the UN ECE R138 standard designed to determine the pitch rise of a tone at various speeds. This allows pedestrians to determine whether or not a hybrid or electric car is accelerating, and if so, how quickly. Pitch must rise by greater than 0.8 percent for every 1 km/h increase in speed.

Active Sound Design allows automobile manufacturers to add sound to the vehicle’s interior and outside. Interior active sound systems actively add sounds based on the vehicle’s operating state to enhance or reduce desired/unwanted sound. This might be to compensate for a cylinder deactivation or to add engine orders when the electric motor is the only thing functioning.

Electric cars are quieter at low speeds than internal combustion engine equivalents, prompting rules requiring the deployment of artificial warning noises to identify them as a safety safeguard for other road users. Arguments against the notion have been raised, concentrating on the ensuing environmental noise pollution, while several practical implementations have been proposed.

Analog Devices have been planning a possible integration into the electric vehicles through the high processor-based warning systems. The ADSP-BF706 Blackfin+ processor is a single-chip solution for audio processing and control area network (CAN) bus interface. Analog Devices created a CAN software stack that runs on the ADSP-BF706, allowing customers to quickly create automotive-grade demos.

Alongside these integrations, The Brigade has developed new innovations into action for better alertness perspective of operations. Brigade has created a multi-frequency Quiet Vehicle Sounder that incorporates proprietary bbs-tek® technology. White Sound® frequencies are used extensively by bbs-tek®. Anyone in the vehicle’s direct path may quickly determine where and from where the sound is emanating and take evasive action if necessary. There is no other option.

The Auto Safety subsidiary company of Volvo, Polestar has made its entrance into the EV Warning Sound Systems through the latest integration of the Acoustic Vehicle Alert Systems for EVs. The Polestar 2 will deploy two different sound files that were “engineered according to very specific parameters with a pending patent.” The quieter one is like a hush, and the more urgent one sounds like a beating heart.