Bicycle also known as cycle, is one of the oldest means of travel invented by the Germans with a big front wheel and a small wheel behind it. It may be human powered, motor powered or hybrid according to application. Traditionally the bicycle has a rigid frame and wheels are attached to its front and back end so as to provide easy movement with less effort. The accessories and other items were started to attach with the basic frame to facilitate the comfort. 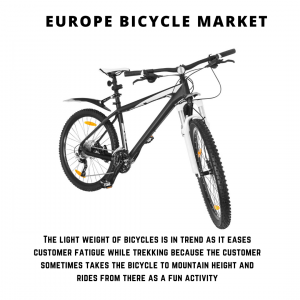 They were also known as boneshakers for a rough ride due to rigidity in their frame and no shock absorbing capacity to its overall structure. The boom of adding comfort led to the use of the bicycle for competitive purposes and was famous amongst adults and youngsters. The main popularity of bicycles came in the current generation due to their health concern or environmental concern to promote the sustainable future. The main advancement in bicycles that led to popularity is the multi gear system, and using shock absorber.

The market scenario of the bicycle industry is booming due to continuous technological advancement. Components like Gear system, shock absorber, better handling, material use, better design, light weight, tubeless tires, etc. has attracted the customers and investors. People are realizing that staying fit is the most important aspect of life, to fulfill this the people are spending on auxiliary items  to help them to achieve the goal. Continuous increase in pollution, congestion of traffic, less space on road due to motor vehicles, save time in traveling in metropolitan areas, etc also attracted the customers to buy the products. The bicycle industry also contributes to increasing the employment rate. The current and future of this industry has a good growth rate.

IMPACT OF COVID ON BICYCLE MARKET IN EUROPE

The COVID has affected the marketplace of all sectors all over the world. The people working other than their parent countries have experienced huge financial shocks as they had used all their savings. Some companies have paid their employees in this tough scenario; some have just left them in the middle. The raw material and semi – finished good’s movement was halted that led to stop the production and distribution of consumer end products.

The COVID has indirectly changed the perception of organization working culture, structure, and individual perception as well. The COVID has an effect of decreasing the production rate of the bicycle industry. After the lockdown the people have started going to offices with 50 % or less capacity. The production trend can be seen as increasing again and it may come to normal level within a few quarters. Although the industry may recover in a quicker manner than expected due to person changed perception as they have started to use the resources which help out in being healthy. The people in urban areas now prefer to use the bicycle due to more motor vehicles on the road that delays their time of arrival.

The bicycle market in Europe is estimated to be US $ XX billion in 2020 and expected to grow at a rate of xx% CAGR by 2026. The driving factor for the bicycle market is introduction of new technology and methods for the manufacturing of bicycles. The electric bicycle introduces customer satisfaction which may find it difficult to paddle the bicycle for a long distance, eases out the muscle strain problem and the customer can switch between electric mode and normal mode as required.

The light weight of bicycles is in trend as it eases customer fatigue while trekking because the customer sometimes takes the bicycle to mountain height and rides from there as a fun activity. BMX bikes are a special class of bicycle which is now a fun sport in some countries, the youngsters use these bicycles as the mode of sports activities. The competition is held using a BMX bicycle which is famous all around the world. The bicycle used for racing is another kind of sport which entertains the people and these bicycles are light weight and have a highly aerodynamic structure.

The new concept of using nontraditional material for the manufacturing of bicycles is in trend, like using the woods, Carbon fiber body, graphene for specific parts like tires, body is used for manufacturing bicycles.

A new type of bicycle segment has entered the market named foldable bicycle which involves customer’s interest in assembling a bicycle. It is believed that this increases the customer satisfaction and excites the customer that they were also involved in overall development of their finished product although this is a new concept but the positive response is received from the customer’s end which is encouraging other companies to use this technique.

These overall developments in the future of bicycles can be seen and also new segments may be introduced to attract more customers in near future. After COVID the there is an increase in customer’s demand to buy bicycles shows the positive impact on bicycle market of Europe and of world.