For hybrid electric cars (HEVs), plug-in hybrid electric vehicles (PHEVs), and all-electric vehicles, energy storage technologies, generally batteries, are required . Because of its high energy per unit mass compared to other electrical energy storage technologies, lithium-ion batteries are presently utilised in most portable consumer devices such as mobile phones and laptops alongside the latest integration within the EV segment of operations. 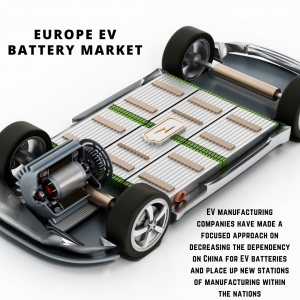 Under specific conditions, the battery capacity reflects the greatest amount of energy that can be recovered from the battery. This unit can be represented in either ampere hour (Ah) or watt hour (Wh), but electric cars prefer the latter.

Currently, the batteries are the main obstacle to EV wider adoption. The development of better, cheaper, and higher capacity batteries will extend vehicles autonomy, and the users view them as a true alternative to the internal combustion engine vehicles

The battery pack is the costliest component in any electric vehicle. For example, the Nissan LEAF’s lithium-ion batteries were initially a third of the vehicle’s total cost. Another fact that reinforces the battery cost reduction trend is building a “Gigafactory” in order to cut down on the production costs and raise the manufacturing of batteries.

Europe is making strides in developing a lithium-ion battery (LIB) sector. Despite the gap between European firms and the top industry incumbents, there are compelling reasons for European companies to enter the market. LIB technologies are not monolithic. Cost considerations and product requirements dictate their suitability for each application.

Lithium-ion battery applications are booming, ranging from electric automobiles to energy storage systems, thanks to a global transition away from fossil fuels. There is presently a concentrated drive to establish European sovereignty in LIBs, including the European Battery Alliance to encourage production and research and innovation programmes like “Horizon 2020″ and ” Battery 2030+”

European businesses, on the other hand, confront a difficult industry climate with considerable obstacles. Asian players dominate the lithium-ion battery production scene, accounting for ~90 percent of worldwide manufacturing capacity. The Asian giants are entering Europe to meet local demand. In addition to competing against their scale and cost advantages, new entrants must reckon with a fast-paced and dynamic landscape.

LIB technology and industry are rapidly evolving, which presents opportunities. There are four strategic reasons why European LIB players and equipment makers are getting a second shot. To begin with, European manufacturers have not just access to finance, but also to advantageous economic conditions. Local manufacturers give a ten percent cost savings over Asian imports.

The Europe EV Battery Market can be segmented into following categories for further analysis.

The Europe EV battery market has recently made its technological intervention through varied amounts of research and development. The Private and Public based Research collaboration has been important in placing the battery technology into the market requirements. The Nations have been developing the required infrastructure to better mobility solutions.

In the most recent battery technology, High-molecular materials with high insulation such as polyolefin, polypropylene are used for separators. These materials are stretched to make tiny pores, and there are dry and wet processes to do it. There has been a more focused approach on the safety integration concept of battery operations. There has been more of limited usage to one film material as a separator, but these days, there has been use of various materials by coating them to enhance performance of separators.

Solid-state batteries, which are not yet being used in mass-market cars, promise to offer greater energy density compared to the lithium-ion batteries typically used in today’s electric vehicles. There is extensive use of sulfide-based cells and promises that its solid electrolyte is not flammable, and it delivers more than 50 percent more energy density.

EV Batteries form to be the heart and soul of the propulsion in the EVs on a large scale of operations irrespective of the vehicle category being used in the market. Thereby the technological advancement and better mobility solutions are to be placed to have better consistency in battery technology and manufacturing capabilities. The European Nations based EV manufacturing companies have made a focused approach on decreasing the dependency on China for EV batteries and place up new stations of manufacturing within the nations.

Volkswagen has made its introduction into the EV Battery manufacturing segment of operations in recent developments. Volkswagen has announced plans to build six EV battery factories across Europe by 2030. The business intends to mass-produce standardised batteries in order to cut costs and boost vehicle profitability.

In order to achieve its objectives, the German carmaker has expanded its current collaboration with the Chinese battery manufacturer Guoxuan High-tech (also known as Gotion High-Tech) to manufacture batteries. The new strategy would make battery production a core business of VW. Plans are already underway for the construction of six massive battery manufacturing plants across Europe and the US.

The PSA Group and French battery maker SAFT (one of the seven largest battery makers in the world) intend to set one gigafactory up in France while Volkswagen aims to open six gigafactories in the coming years, across Europe. With conventional assembly lines being made redundant, the resulting unemployment could be, to a degree, cured with the emergence of multiple gigafactories

Samsung Europe which has been the SDK Division of operations under the Battery technology requirements of EV has been of major importance in the EU.The Most recent advancement has a competitive edge by securing own separator coating technology. It developed an ultra-high heat-resistant separator to ensure safety, and thin films to increase capacity. And are currently using adhesive separators for high quality, and working on the high heat-resistant adhesive separators, which is at the final stage of mass-production for high safety and quality.