Railway signalling systems are complex control systems. As a result of the long railway history, there are a lot of specific national solutions based on different technologies. The purpose of signalling systems is to ensure safe movements of trains on a railway infra-structure by locking  movable  track elements in a  proper position, checking the clearance  of track sections, locking  out conflicting moves, and  controlling  train movements in a  way  to keep them safely apart.

While  being  gradually  replaced  by  advanced  radio-based  train  control  systems,  in  which trains are guided  by cab signal indications, lineside  signals are still the  most common technology  for  controlling  train  movements in  railways  where  train  movements  are  strongly separated from shunting movements.

There is a wide variety of fixed signals used by railways around the world. They may be categorised into two broad groups, “speed signalling” or “route signalling”. Speed signalling is the most common, where the indications for the driver represent an instruction to proceed at a speed depending on the type of train in his charge. Most administrations in continental Europe and North America have adopted this system. 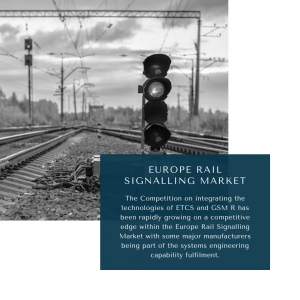 Signalling systems regulate the movement of trains and ensure the safety of rail users by maintaining a safe distance between trains travelling on the same route, controlling the movement of trains at junctions or when crossing a path that could be used by another train and regulating train speed according to the density of train traffic.

Signalling systems include complex combinations of electronic controls and circuitry, colour light signals and track controls, and features such as train stops that respond to a red signal being overrun. Different elements of a signalling system combine to minimise the likelihood of human failure.

Installing and maintaining rail signalling systems demands high levels of knowledge and skill in a discipline that crosses electrical, communications technology and information technology. This knowledge integration perspective is important considering the Rail signalling systems being more than a series of ‘traffic lights for trains’. Signals are the main way train drivers make decisions about train speed and the route ahead of them.

Europe in recent days has planned to increase its capability within the Europe Rail Signalling Market and Mobilization to have better localised efforts and signalizing safety provisioned in the Union Counties. The Rail Signalling market of Europe has been playing a major role in contrasting the requirements of better signalling perspectives.

Over the years, in Europe, railways have been developed and operated a lot with the consequent absence of interoperability among different countries. In the early days of railways, men (train dispatchers) were standing at intervals (blocks) along the line with a stopwatch and they used hand signals to inform train drivers that a train was going to pass.

At the beginning of 80s, upgraded rail signalling systems were introduced in Europe, in order to increase railway safety. They were already able to constantly monitor the speed of the train. They’re called ATP (Automatic Train Protection) systems.

First ATP systems used a target speed indication and audible warnings to advise the driver if the train passed a red (danger) signal or exceeded a speed restriction. In these cases, the system applied an automatic brake if the driver fails to respond to the warnings.

Over the years, Europe has developed and operated a lot of different ATP systems, according to the different national requirements, technical standards and operating rules. Obviously, in the modern era, where the labour market goes beyond national borders, the independent development of these national systems was an important limit for the European Integration.

The EU embarked upon a project to analyse the problems relating to signalling and train control. At the end of 1990, the ERRI (European Institute of Railway Research) began to develop a common interoperable ATP system, which could be adopted in all European countries.

This had brought upon a new market segment into action within the Europe Rail Signalling Market which was now dependent upon the Rail control and Signalling based Management System rather than on the Laborious requirement.

The Europe market of Rail Signalling can be segmented into following categories for further analysis.

By Combination of Signalling

The Europe Technology with the rail signalling has been adaptable and has changed over the past few years considering its recent developments as part of the control and management system-based integrations. It has been crucial in developing a skill based technological integration. The present technological trend within the system can be seen as part of the control system-based interoperability.

The most recent integration as part of technological innovation within the Europe Market of Rail Signalling is the ERTMS/ETCS has been chosen as the international command control and signalling system. Thanks to these standardizations, from the beginning of the 21s century interoperability of the European rail network’s guaranteed.

ERTMS is an international standard programme created to develop a common interoperable platform for railways and signalling systems. Interoperability is achieved when a system is able to operate together with other systems of different origins with predefined limits.

For this purpose, the essential activities for achieving interoperability were the definition of a set of sub-system and components of the platform, specifying their essential requirements and interfaces by developing functional and technical specifications.

The command-and-control system chosen is a standardized, interoperable ATP/ATC system, called ERTMS/ETCS, or simply ETCS which is a set of standardized requirements of functional control on transmission and train operability.

In order to allow the communication between trains, trackside and railway regulation control centres, the sub-system chosen is GSM-R, the international wireless communications standard for railway communication and applications. For this reason, ERTMS programmes can be defined as the combination of ETCS and GSM-R subsystems.

The Competition on integrating the technologies of ETCS and GSM R has been rapidly growing on a competitive edge within the Europe Rail Signalling Market with some major manufacturers being part of the systems engineering capability fulfilment.

The Signalling company has been responsible for integrating ETCS on board various sets of operational trains within the European Union wherein they provision the requirements of delivering a ERTMS and ETCS Combination based solution for the Freight Rail operators within the union.

The Company of  Thales offers a complete portfolio of ETCS solutions for turnkey projects in the same way as for green field or brown field installations. At the same time it has developed to take care of other horizontal areas such as cyber security or special functionalities besides international specifications. For example DAS, ATO, IP-based radio communication and advanced diagnosis.

The product from Thales is displayed as per the stakeholder requirements of Level 1 and Level 2 ETCS. ETCS Level 2 is a radio-based system which displays signalling and movement authorities in the cab. ETCS Level 1 can be easily superimposed on the existing national signalling system and provides cab signalling.