Two wheelers are one of the most affordable and more efficient forms of transportation within the Europe Two-Wheeler Market and Automotive Market. Motorcycles have powerful engines (even if restricted by law) and in combination with their low weight are capable of higher acceleration and a higher top speed than many cars.

Powered two-wheelers (PTWs) are a popular form of transport providing mobility to millions of people worldwide. However, unlike other forms of motorized transport, PTW users, as with cyclists, remain more vulnerable due to the intrinsic characteristics of the vehicle.

Motor vehicle ownership and activity are growing rapidly in European Nations and other low-income Asian countries, causing much higher adverse impacts than in the OECD countries, despite much lower motorization levels. 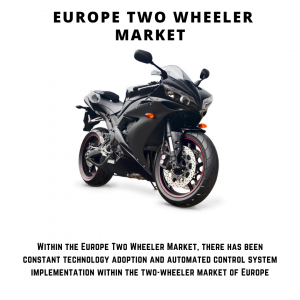 These impacts include rapidly growing congestion, air pollution, energy consumption, trafﬁc accidents, noise, and transport wastes. Growing urban incomes are an important contributor to rapid motorization, but there are other factors as well.

The Motorcycle Industry in Europe is committed to applying the principles of sustainability as a key part of the effort to develop its market and value. Manufacturers wish to contribute to the development of a vision for the future of transportation, and to meet the expectations placed on the Powered Two-Wheeler sector.

Creating and safeguarding jobs through innovative and problem-solving expertise are just as important as the commitment to the environment, society, and open dialogue. Nowadays in Europe, there is a noticeable increase in the popularity of power two-wheelers (PTW). This is largely due to the increase in urban transport problems.

The most aspiring and technological introduction Powered Two-Wheeler’ (PTW) covers a wide range of vehicles from mopeds, scooters and other small capacity motorcycles, ideal for urban journeys, to large capacity custom, sports and touring models, as well as tricycles.

The increase of PTWs in European cities reflects the need for an alternative mode of transport. PTWs can play an important role in providing viable solutions to citizens who are struggling with congestion, long city trips and hard to find parking places. The European Commission, in its urban mobility action plan, underlined the role of PTWs as an alternative mode of transport contributing to optimising urban mobility.

For certain journeys, PTWs can be an alternative to individual car-based private mobility or a complement to public transport, successfully integrating the urban transport toolbox available to citizens, businesses and authorities. This is confirmed by the growing participation of PTWs to the urban modal split in many European cities.

The Europe Two Wheelers Market can be segmented into following categories for further analysis.

Nowadays in Europe, there is a noticeable increase in the popularity of power two-wheelers (PTW). This is largely due to the increase in urban transport problems. In analyzing the development of PTWs, it is important to note the fundamental differences in their use on the European continent.

Climatic conditions are an important factor differentiating the popularity of two-wheelers, which is evident in the north–south arrangement. While in the south, mopeds and motorbikes are used as one of the main means of transport, in the north, they are treated more as a luxury good and used for recreational purposes. 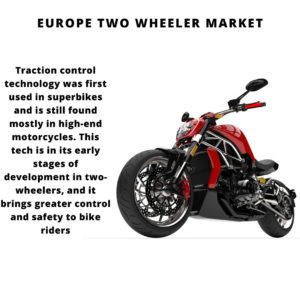 Small steps and gradual advancement in technology is what makes the high-end performance bikes we see today so incredibly superior in every aspect than their predecessors. In addition, yes, these technology advancements, though in small amounts, have trickled down to low-capacity scooters and motorcycles too.

Fuel injection technology revolutionized the fuel efficiency and performance of cars in the last two decades. Finally, two-wheeler development and research caught up with this technology a few years ago and now we have a few motorcycles using this new technology. The advantage of fuel injection over a carburettor is that it is more eco-friendly, and it helps in efficient burning of fuel which improves fuel efficiency.

Traction control technology was first used in superbikes and is still found mostly in high-end motorcycles. This tech is in its early stages of development in two-wheelers, and it brings greater control and safety to bike riders. Traction control prevents the rear wheel from drifting which can lead to skidding and serious accidents. It achieves control of the rear tyres by manipulating the rotational speed of the rear wheel. This technology is now also being integrated into Indian two-wheelers.

Within the Europe Two Wheeler Market, there has been constant technology adoption and automated control system implementation within the two-wheeler market of Europe. The major stakeholders are involved in implementing new strategies of technology to have a better and safer ride for the customers.

Aprilia, one of the most improvised technological manufacturers of PTW and Mopeds in Europe Two-Wheeler Market has implemented the Dynamic Damping Technology. The brand new electronically controlled suspension system developed by Aprilia and protected by four patents, the benchmark in motorcycling on a global level where technology, efficiency and reliability are concerned.

After APRC, the highly sophisticated “package” of electronics systems which equips the RSV4 and Tuono V4, once again Aprilia demonstrates that they are pioneers in the field of electronics applied to bikes with the introduction of a suspension system which uses automotive components to guarantee maximum reliability: a glance to the future, thanks to its vast possibilities of development and diversified applications.

The Austrian manufacturer KTM has been involved in implementing new technologies within the Europe Two-Wheeler Market. It has been developing a ride-by-wire technology to make more responsive and fast bikes. This technology has been widely used in the car and now the brand has decided to use this technology in Duke 390 and RC390. Whole mechanism of this technology will be the same as it works in cars.

The rider can re-tune the engine output and suspension of the bike according to the needs. This technology will work by using twistgrip which is associated with a device called a transporter that serves according to the change in the movement of the hand over the throttle via electrical signals. Through this movement, the ECU will read the rider’s needs from the motorcycle.