Modern farm tractors can be used for wide variety of jobs such as for pulling cultivators, harrows, wagons and more. They are generally of 2 kinds, 2WD and 4WD. 2WD tractors are ideally suited for small farms and flatter terrains. 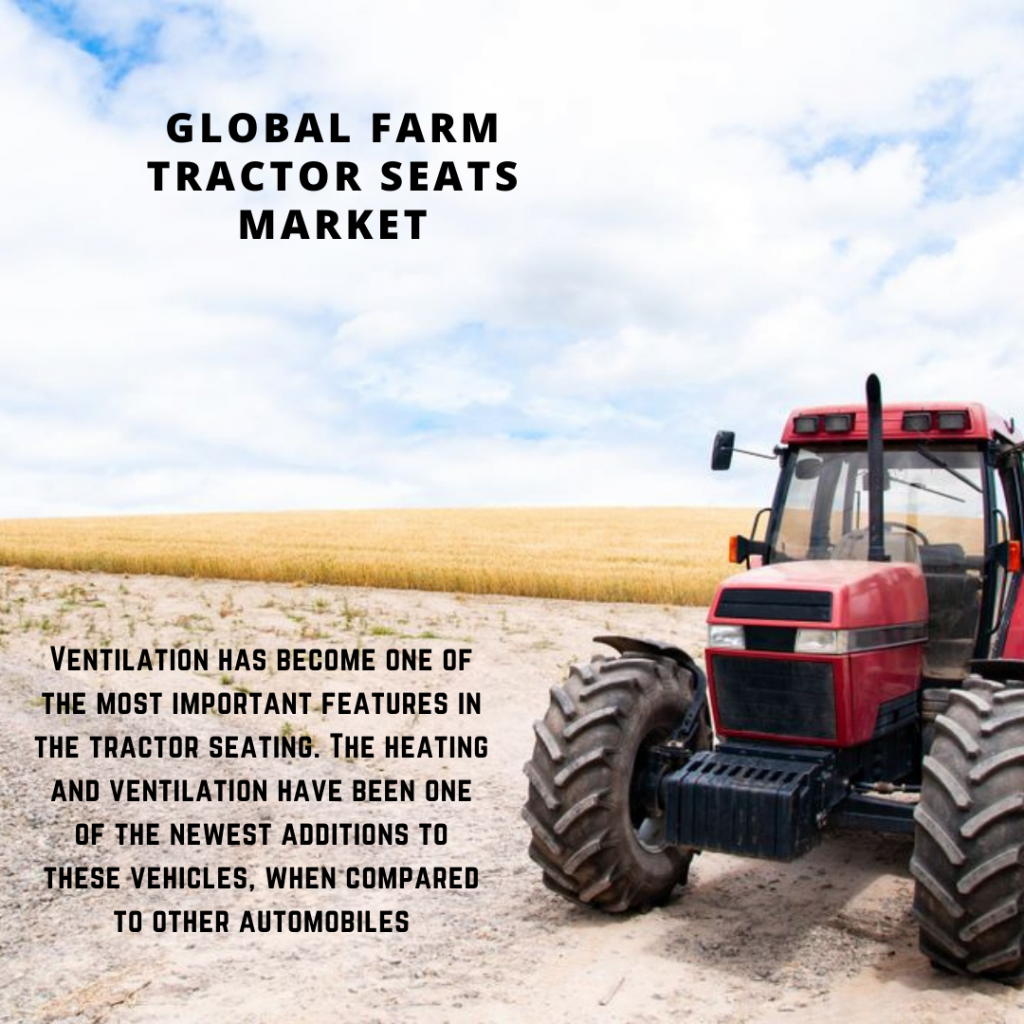 In 2019, tractors accounted for 32% of the global spending on agricultural machinery.

The tractor seats market is majorly driven by the high-powered tractors as the market value of seats is directly proportional to the power capacity of the tractor used.

With the increase in tractor capacity there is a need for extra comfort and also it leads to requirement of latest technology in construction enhancing its mechanism. Regions such as US, Canada, Europe and Russia where the average tractor power is around 70-100 HP are the major driving regions in the market.

Over the years to improve the comfort of the driver there has been high penetration of leather seats in the tractor seats segment. The leather seats have almost become mandatory fitment in the higher-powered tractors.

In high powered tractors such as the >200 HP ones, the seats were fitted with “Alcantara” leather seats which provides comparatively more grip than a typical synthetic leather. In US, the low budget and low powered Mahindra tractors had seats mostly covered with cloth.

However, in market such as India which is the largest tractor market, the average power of the tractor is <50HP and thus the leather seat penetration is significantly less. There are high percentage of tractors fitted with the FIP (foam in place) cushions, covered with vinyl material.

In Australia, too there as in increased fitment of cloth covered seats in the lower powered tractors.

Ventilation has become one of the most important features in the tractor seating. The heating and ventilation have been one of the newest additions to these vehicles, when compared to other automobiles. Just like the suspension, the ventilation feature too is directly related to the power the of the tractor.

With the increase in power of tractors the bigger size tractors have created a room for the seats to be ventilated. In US only John Deere tractors with 200+ HP were equipped with the seat ventilation.

However, in Europe the percentage of fitment of this ventilation is more and in tractors such as Case and Claas even in the sub 100 HP ones the seats had heating and ventilation feature.

In Australia, the New Holland tractors of 200+ HP models were equipped with the ventilation option.

Mechanical Suspension with damper is the most commonly found tractor seats. Since market like India has highest number of sub 75HP tractors, the volume mechanically suspended seats are comparatively higher than the air suspension seats.

John Deere tractors which had the highest number of 100+ HP model tractors also had the most advanced machinery equipment and the had the most comfort seating features. John Deere Tractors were equipped with one of the highest degrees of freedom and also was capable of seat swivel of up to 40 degrees. It was the only few manufacturers to provide lumbar support to the tractor seats.

US had the higher penetration of instructor seat due to its increased volume of high-powered tractors. An individual seat with significantly less comfort features is placed next to the driver.

Indian tractors have one of the least modernized seats and have mostly mechanically suspended seats. The seat adjustment feature in these tractors are very limited with only 4 degrees of freedom. In India, the individual instructor seat in tractors is almost a rarity but, a bench seat to accommodate 3 people on the side of the driver is most popular feature.

The seating market for tractors especially in markets such as India had a huge scope of improvement as in adoption of air suspended seats. This will boost the market value of seating market in the region.

In the Europe and US markets it is expected that only the volume of the tractors will propel the market value of the tractor seating. Since, there is enough penetration of modernised seats in high powered tractors and it can be predicted that these high mechanised seats will stay in this segment rather than making an entry to low powered ones, as it requires sufficient space and also, it will increase the overall price.

Some of the leading companies in the Tractors and Harvesters seating are Akkomsan Otomotiv and Arimis Seating both based in Turkey. KAB seating (UK) and SEAT Industries (Italy) are the other European companies, who are the leading market players in this sector.

In India Harita Seating based in Chennai with manufacturing plant in Hosur is one of the leading suppliers of seating tractors and other agricultural equipments. SIETZ based in Haryana, India is another leading tractor seat supplier.