Vehicles that can run on different fuels are known as flex-fuel vehicles (or fuel blends). This technology was developed in the 1980s, and there are now around 2 million flex-fuel cars in the United States. The major fuels utilized are gasoline and numerous alternative fuels, such as pure ethanol (which is already used in motor vehicles in Brazil) and ethanol-gasoline mixes. 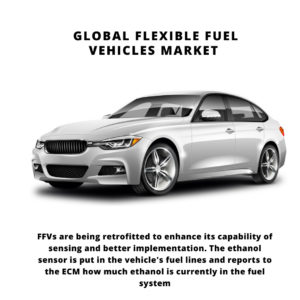 Nowadays, modern flex-fuel vehicle engines can burn any percentage of the resulting mixture of gasoline with ethanol or methanol in the combustion chamber, and spark timing and fuel injection are automatically adjusted based on the authentic blend of both fuels detected by an added fuel mixture composition sensor. Flex-fuel cars differ significantly from bi-fuel vehicles in that two different types of fuel are kept in two separate tanks and the engine only works on one fuel at a time. Flex fuel vehicles are outfitted with reformed components that have been particularly developed to work with the chemical characteristics of ethanol. These modifications enable smooth functioning and a long useful life over a wide range of ethanol mixes.

The electric propulsion system is arguably the most advanced, with some consensus that induction motors are probably the leading technology for power trains, and brushless DC or inductive alternators are probably the leading technology for serial drive hybrids. In the future, switched reluctance motors and synchronous reluctance drive topologies may become feasible.

All automobiles manufactured since 1980 are ethanol vehicles capable of running on up to 10% ethanol with no engine modifications. Because pure ethanol has an octane rating of 133, adding 10% ethanol to gasoline improves the octane rating of the final fuel by two to three points. E85 reduces hazardous hydrocarbon and greenhouse gas emissions and is the best performance fuel available, with an octane rating of at least 105 and no usage of Methyl Tert-Butyl Ether (MBTE), which is being phased out due to ground water pollution.

Ethanol/gasoline flex-fuel cars have been around for a long time, with the Ford Model T being the first practical example, which could run on either gasoline or ethanol (thought at that time to be an attractive feature for potential customers in rural areas). On a global scale, the market penetration of several types of alternative fuels and related vehicles, including ethanol, compressed natural gas (CNG), and liquefied petroleum gas (LPG), has been expanding to varying degrees.

Stringent environmental rules, decreasing natural supplies of diesel, growing vehicle pollution requirements, and reduced reliance on oil imports are some of the drivers of the automotive flex fuel engine industry. European manufacturers are launching a variety of technologies, such as cleaner alternative fuels and sophisticated power systems for automobiles, with the goal of improving flex fuel engine efficiency. As a result, reducing oil imports would eliminate a critical cost while also improving the country’s economy. As a result, nations with limited oil reserves are constantly pursuing steps to minimise oil use and increase the use of local alternative fuels.

Flexible Fuel Vehicles are outfitted with modified components that are especially intended to be compatible with the chemical characteristics of ethanol. The primary FFV changes are depicted on the back in an image. These changes enable smooth functioning and a long usable life in a wide range of ethanol mixes. Vehicles with special characteristics that allow them to run on E85 may be purchased for a low cost. Manufacturers give standard warranties for FFVs that are equivalent to those for gasoline cars at no additional cost because they have a proven performance history.

FFVs are being retrofitted to enhance its capability of sensing and better implementation. The ethanol sensor is put in the vehicle’s fuel lines and reports to the ECM how much ethanol is currently in the fuel system. This enables you to use any ethanol blend you choose. All you have to do is drive up, fill up, and drive away knowing that this sensor is continuously keeping an eye on your gasoline system. However, before the ECM can make use of this signal, it must be processed and translated.

Every time the ethanol sensor notifies the ECM on the ethanol % in the specific FFV fuel system, the Flex Fuel calibration is dynamically changed on the complete movement of the vehicles. According to the quantity of ethanol in the fuel system, the system continually analyses and adjusts your engine calibration in real time. Refined, tried-and-true technology. E85 may be the key to preserving our precious oil reserves, while also helping us move towards a cleaner future. Because the alcohol is made from the fermentation of raw materials containing starch and sugar, such as wood residues, crops or sugar beet, or other biomass (waste organic matter, which can be animal or vegetable), it has an almost neutral Carbon Dioxide balance.

Flex fuel vehicles run on a blend of petrol and ethanol or pure ethanol. Current regulations allow for a 10% blend only (E10) with a proposed 20% ethanol blend in petrol scheduled to be introduced in 2025. However, due to supply-related issues, E10-blended petrol is only available in 15 states in India which has made its way in through the complete system of integration of automobile manufacturing.

Ford Automobiles has been developing the Flexible Advanced Fuel System for better guidance into the future. It has most recently brought in the Transit Connect Panel Van which falls under the light-duty commercial vans. The Integration has a base 169 horsepower, 2.5-liter Duratec four-cylinder engine powers the Transit Connect, with this engine now offering standard E85 flex-fuel capability in all but California emissions states. The flexible-fuel variant is capable of running on E85 (85 percent ethanol/15 percent gasoline), unleaded gasoline, or any blend of the two fuels. This engine can also be ordered for use with natural gas or LPG. An optional 1.6-liter EcoBoost engine offers nine additional horsepower plus one additional mpg. The EcoBoost engine requires 93 octane fuel for peak performance.

Nissan has been focusing on development in the Global market of Flexible Fuel Vehicles within the cargo-based integrations. Nissan’s Flexible Fuel Technology enables a single gas tank to power the Armada and Titan’s powerful 5.6-liter DOHC Endurance V8 on either regular gasoline or E85, a blend of 85 percent ethanol and 15 percent gasoline, or any combination in between.

The ethanol/gasoline combination not only decreases the amount of pure gasoline consumed, but it also cuts vehicle emissions since ethanol burns cleaner than gasoline. Flexible Fuel Vehicle technology is the ideal ecologically conscious choice for Titan and Armada vehicles on the market. E85 allows both full-size cars to retain their full power and robust capabilities while emitting less pollution, whereas ethanol is a domestic product. E85 enables both full-size vehicles to maintain their full power and rugged capabilities along with reduced emissions, while ethanol is a domestically available and renewable fuel, assisting the reduction of the reliance on foreign oil