FCEV trucks have the benefit of being an electric vehicle, but with a similar weight and power output to regular diesel-powered trucks, and have a similar refuelling time of around 15-20 minutes.

The global fuel cell commercial vehicle market is a very niche market currently set for growth as various OEMs, fuel suppliers and government have shown increasing interest in this technology.

Hyundai announced that the hydrogen fuel cell system being shipped to the European continent will also be used by non-automotive companies including a Swiss hydrogen solution firm called GRZ Technologies.

Hiringa Energy and HYZON Motors agree to deploy fuel-cell-powered heavy trucks in New Zealand in 2021.This agreement is in line with Hiringa and its partners’ strategy to roll out over 1,500 FCEVs by 2026.

The trucks will come in a variety of right-hand drive configurations with a gross combined mass (GCM) of more than 50t and suitable for New Zealand operators including 8×4 and 6×4 rigid and prime movers with driving distances of up to 500km. 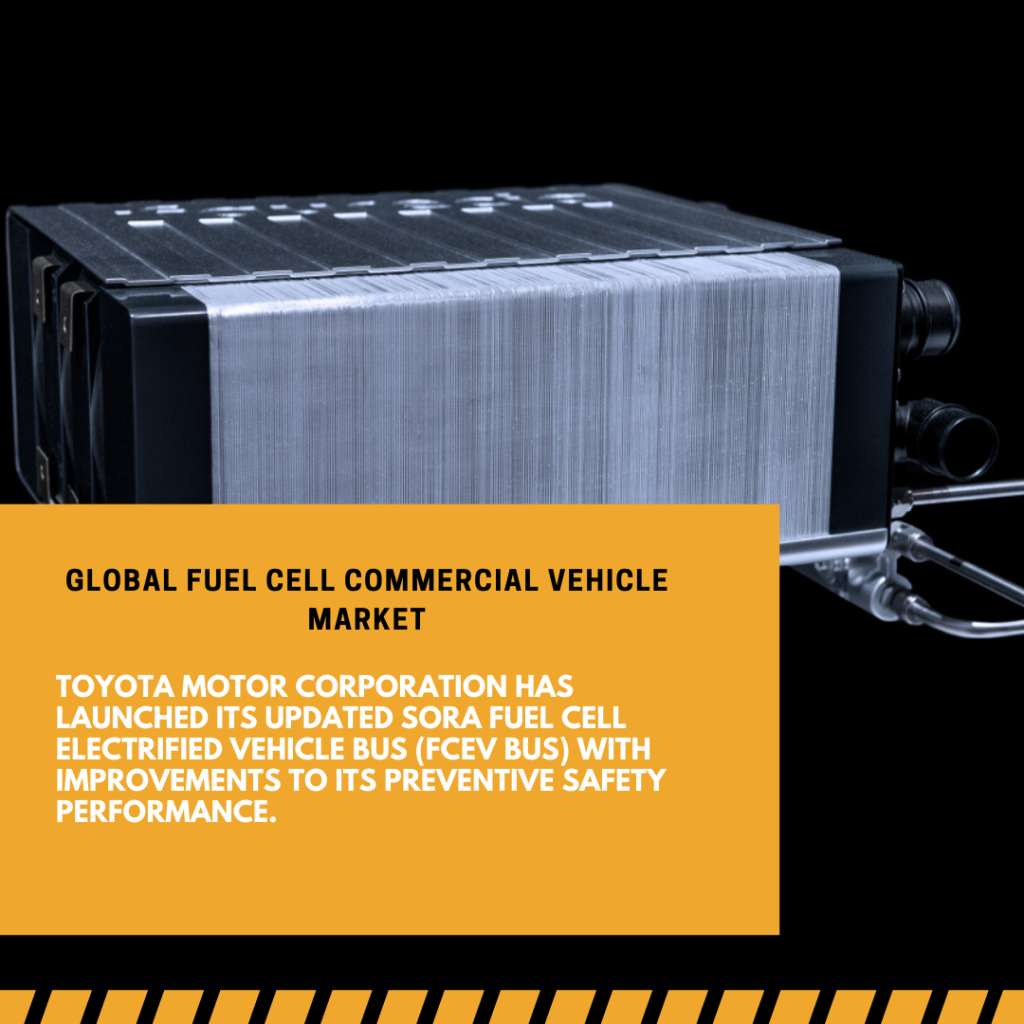 Plug Power holds a vision of decarbonizing the globe, and more specifically in the areas of green hydrogen and mobility. The company’s 30 to 125 kW ProGen engine suites heavy-duty vehicle applications, including class 6 and 8 trucks.

Daimler plans to fuel the truck with liquid hydrogen, rather than the gaseous hydrogen. Daimler Trucks unveiled the concept Mercedes-Benz GenH2 Truck. Due to the use of liquid instead of gaseous hydrogen with its higher energy density, the vehicle’s performance is planned to equal that of a comparable conventional diesel truck. Daimler Trucks plans to have the eActros LongHaul ready for series production in 2024. Its range on one battery charge will be approximately 500 kilometers. With the ePowertrain, Daimler Trucks plans to achieve synergies and economies of scale for all relevant vehicles and markets.

Volvo Group and Daimler Truck AG signed an agreement for a joint venture to develop, produce and commercialize fuel-cell systems for use in heavy-duty trucks as the primary focus, as well as other applications. The ambition of both partners is to make the new company a leading global manufacturer of fuel-cells, and thus help the world take a major step towards climate-neutral and sustainable transportation by 2050.

COVID-19 has affected the production and sales of new vehicles across the globe as the whole ecosystem had been disrupted in the initial outbreak.Due to this pandemic, many countries had imposed a complete lockdown of more than two months, which in turn has impacted vehicle production.OEMs had to wait until lockdowns were lifted to resume production and also, component manufacturing was suspended which leads to liquidity issues for small tier manufacturers. Thus, the production suspension during the initial months of outbreak and lower demand due to higher cost had an impact on the fuel cell commercial vehicle market.

However the conditions improved in the latter months, but the overall FCEV market didn’t suffer much as demand for zero emission vehicles increased during the latter months of 2020. Many countries increased their investments across the globe to develop hydrogen fuel infrastructure and incentives were offered to buyers to create opportunities for OEMs to expand the fuel cell market.The major factors such as growing demand for low emission commuting, growing mass urban transportation and rising demand for alternative fuels along with government support will increase the growth of the fuel cell commercial vehicle market.

Hyundai Motor Group aims to secure a 700,000-unit-a-year capacity of fuel cell systems for automobiles as well as vessels, rail cars, drones, and power generators by 2030.The Company shipped 10 units of the Hyundai Xcient Fuel Cell, the fuel cell heavy-duty truck, to Switzerland.

The global fuel cell vehicle commercial vehicle market is estimated at $XX Million in 2020 growing at –% CAGR till 2025.

Though Toyota fell to the second position, its sales of fuel cell vehicles increased more than 8.3 times year-on-year which was boosted by their new Toyota Mirai Gen2 model. Honda Clarity fuel cell hydrogen vehicle has declined in the market share as its growth rate fell below the market average. This comes as a consequence of Honda declaring the end of production for the hydrogen electric vehicle in July 2021.