Graphics Card is a major component within the Graphics Processing unit of the PC, laptop, or other computing devices.It gives the required clocking speed and refresh rate requirements within the computing technology to demonstrate and operate the required programmes within it. This can be used for varied fields of purposes ranging from Military to Daily usage patterns-based requirements.

The GPU is a specialized processor efficient at manipulating and displaying computer graphics. The term was defined and popularized by Nvidia as a single chip processor with integrated transform, lighting, triangle setup/clipping, and rendering engines that is capable of processing a minimum 10 million per seconds. 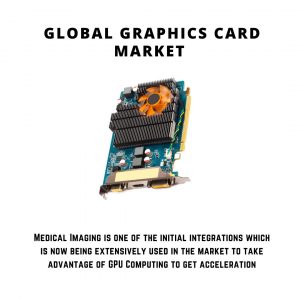 Graphics Card is placed within the graphics processing unit, or GPU, which stands to be one of the most important types of computing technology, both for personal and business computing. Designed for parallel processing, the GPU is used in a wide range of applications, including graphics and video rendering.

Modern GPUs are very efficient at manipulating and displaying computer graphics. But it is also used in general purpose computation in various computation intensive algorithms. These algorithms can harness the high multiplicity of the GPU to improve their performance.

There has been an increased consciousness being given towards the presence of Graphics Processing Units onboard various platforms which includes Smartphones as well. This contributes to increased demand for durable and less power consuming graphic processing units for smartphones which is expected to foster high growth of integrated GPUs. Also, smartphone manufacturers are developing products supporting VR and AR, which is expected to act as an opportunity for the smartphone GPU

Factors such as constant advancements in graphic-based games, traction in augmented reality (AR) and virtual reality (VR), trending artificial intelligence (AI), and growing adoption of gaming laptops and computers are expected to fuel the graphics processing unit technological integration in the near future

In addition to this, the thriving portable electronics and wearables market, and growing popularity of Internet of things (IoT) is expected to drive the growth of the graphics processing unit in the upcoming years. However, inability of integrated GPU to facilitate intensive graphic designing software is expected to hamper the growth of technology within the graphics processing unit.

The graphics card has become an essential component in recent years with their integration into various fields of computation and design analysis. This includes its integration into the Life Sciences wherein, Sequencing and protein docking are done using a computerised technology. This has the procedural requirement of calculating intensive tasks that see a larger performance benefit by using CUDA enabled GPU. There is a relatively bit of ongoing work on GPUs for a range of bioinformatics and life sciences codes.

The defence and intelligence community heavily rely on accurate and timely information in its strategic and day to day operations. Intelligence gathering and assessment are essential parts of these activities that comprise data coming from the number of move away sources such as satellites, surveillance cameras, UAVs, and radar.

Converting the collected raw data into actionable information required a significant infrastructure-people, computer hardware and software, power, and facilities –all of which are limited. These tasks and functionalities are completely established by the recently integrated Game Changing Technology or GCT into the systematic functions of military automation.

Medical Imaging is one of the initial integrations which is now being extensively used in the market to take advantage of GPU Computing to get acceleration. The use of GPUs in this field has developed to the point that there are several medical modalities shipping with NVIDIA’s Tesla GPUs now.

The Global Market of Graphics Card can be segmented into following categories for further analysis.

GPUs have truly been a disruptive technology. Starting out as academic examples, they were shunned in scientific and high-performance communities: they were inﬂexible, inaccurate, and required a complete redesign of existing software. GPUs were never designed for high-performance computing in mind but have nevertheless evolved into powerful processors that ﬁt this market perfectly in less than ten years.

NVIDIA have just released its most recent architecture, called Kepler, which has several updates compared to the Fermi architecture which was present in the market. This has made the recent technological integration more viable in terms of its compactness and requirement fulfilment. With increased Cores within the small number of multiprocessors presence, NVIDIA created one of the most efficient technological advancements in terms of lightness and compact capability.

However, NVIDIA has been into technological plans for the high-performance segment with their work on combining ARM CPU cores and Maxwell GPU cores on the same chip. This gives an indication of a combination of CPU and GPU to be made soon in the near future which would further increase the compactness and contribute towards reduction in size.

The next most known GPU manufacturing organisation, AMD has been also involved in creating new architectures for improvised levels of gaming experiences to the user in recent days. AMD’s RDNA architecture is a scalar architecture, designed from the ground up for efficient and flexible computing, that can scale across a variety of gaming platforms.

Graphics processors (GPUs) built on the RDNA architecture by AMD will span from power-efficient notebooks and smartphones to some of the world’s largest supercomputers. To accommodate so many different scenarios, the overall system architecture is designed for extreme scalability while boosting performance over the previous generations.

There has been a recent development within the GPU Technology enhancement that was released as part of technological integration by China based Shanghai Tianshu Zhixin Semiconductor Co. The Organisation had released its latest 7 Nanometre GPU Chip which is made of whooping 24 Million transistors. The Chip was made in concentrated usage within the commercial segments of the market rather than into personal usage sectors within gaming and lesser noted requirements.

The Chip is known as the Big Island (BI), which can operate at a clocking speed out of up to 147 TFLOPS of FP16 performance. This certainly builds up the competitive structuring with similar products from Nvidia and AMD which run approximately on same clocking performance speeds in the enterprise commercial sector usage.

Nvidia considerably restarted the production of dedicated graphics processing units (GPUs) for cryptocurrency miners, which are called CMPs. CMPS are GPUs without video output, so they are cheaper to produce. Although cryptocurrency mining is not expected to be a major source of demand for Nvidia’ products, the gaming sector is, and restarting CMPs would allow the company to meet the demand for gaming GPUs.

The competition amongst the GPU design organizations and vendors has increased in recent years considering the growing demand for GPU usage in various sectors of industrial operations and military requirements around the world. There has been a leading edge of competition being given up by the GPU based Startups in Architecture and framework designs.

NVIDIA has been the topmost organization involved with designing and manufacturing of every possible GPU Infrastructure and Architecture for varied classes of industrial usage ranging from AI / ML to Augmented Reality and Military Technological Integrations.

AMD has been in tough competition with NVIDIA in terms of its focus on lower and mid ranged prices of GPUs being introduced into the gaming market.

AMD has managed to outpace Nvidia in the past 3 years as it tends to focus on lower and mid-range priced GPUs. In addition, it was announced last year that Advanced Micro Devices will work with Hewlett Packard Enterprises on the El Capitan Project, powering the world’s fastest supercomputer.

This gives AMD the required edge on this establishment post pandemic as one of the major contributors to the projects of International importance thereby increasing its branded value. In addition to the previously laid companies within the GPU market, Apple has entered into the market production and  began producing its own chips, breaking up a 14-year partnership with Intel as part of Chips and GPU collaboration.