The hotel industry in India, partially organized and majorly unorganized caters to ~1.8 Billion domestic travelers and 9-9.5 Million foreign travelers. About 55% of organized hotels in India belong to 3-star or higher categories.

Tamil Nadu and Uttar Pradesh account for more than 35% of all domestic tourist visits in India.

Air traffic reform in India, initiated in 2005 with the rise of low cost carriers had a major role in driving the hotel industry growth in India. As a result the tourism industry in India has been growing and has vast potential for generating employment and earning foreign exchange.

The hospitality sector got Industry status in 2012 now needs a significant package from the government which is yet to announce the same. 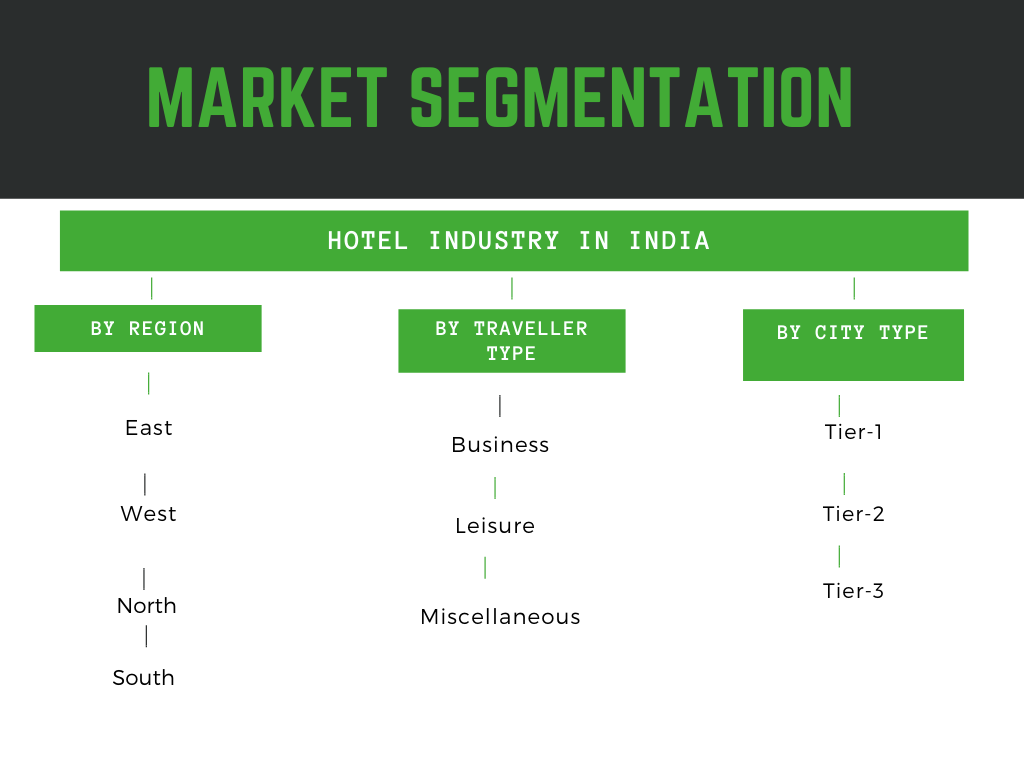 Among five most important hotel ownership models globally, Franchise and lease and license models are now getting increasingly popular in India as compared to owned hotels category.

Over the past five years the 2-3-star hotel occupancy has grown at the highest (~7%) rate YOY. A large chunk of that can be attributed to the growth in organized hotel industry in India.

In the organized hotel industry in India, the Indian consumer internet market is largely concentrated in urban and affluent cities. As a result of that, most of the online bookings for hotels are done by residents of tier-1 and tier-2 cities.

The operating margin for budget and mid-category hotels is between 18-25% in India, which can be even lower considering heavy discounting by online hotel aggregators and thus the market will always need high inventory and >60% occupancy rates.

In the organized sector, more than 60% of bookings are done online, just 2 days in advance.

The GST council`s rate cut on from 28% to 18% for upscale hotels, and from 18% to 12% for mid-scale is expected to be a major growth driver for hotel industry in India in coming years.

Expanding compulsory quarantine for a minimum of 14 days by passengers coming from International countries coupled with travel bans issued for many countries as a measure to prevent the spread of Covid-19 resulted negatively for the tourism industry of India this year.

India has a robust domestic market which could soften the impact as compared with nations that rely largely on international tourists. India receives 11 million foreign tourists, which is small compared to its size and relative potential.

THE METEORIC RISE OF OYO

Most of the below 3-star hotel industry in India is catered by economical range of hotels i.e. which offer rooms at $20(1,400 INR) / night or less. The premium segment i.e. >$100(7,000 INR) per night makes up for less than 5% of total market. This is the reason OYO has been able to scale up its operations so rapidly in just 6 years of its existence. But the story just doesn`t end there.

Oyo majorly caters to urban domestic travellers. For domestic travellers, traditional and emerging themes of tourism including nature, heritage and cultural, religious, adventure, medical and wellness, MICE and wedding have been a key attraction.

Systematic growth, maintenance and sustainable development of tourism destinations and focus on promoting emerging avenues of tourism will be essential towards unlocking its true potential.

In October 2019, OYO announced that it was planning to raise $1.5 Billion in its upcoming funding round, to expand its position in the US and Europe.

In FY 2019, OYO had a net loss of $332 Million on revenue of $900 Million.China operations accounted for ~40% of overall losses.The annual filing also stated that Oyo will post a profit in its India and China operations starting 2022. As per OYO, in the final six months of 2019,  its China operation could generate a loss of  ~$175 Million in EBIDTA.

Operationally, resorts that are located within five to six hours driving distance from cities will be the first ones to recover as demand will be driven by domestic leisure travellers, who might still be hesitant to take flights and rather drive for short breaks over weekends.

The tourism industry, which has suffered a sudden yet savage blow, is counting on this surge in staycations to recover. More and more luxury hotels, resorts, homestays and other players are designing staycation packages to lure potential customers.

PROLIFERATION OF AI IN THE HOTEL INDUSTRY IN INDIA

Data and AI technology are also bringing revolutionary changes on the supplier side of the hotel industry globally. In India, personalized hotel recommendations and better promotions are now possible via hotel’s online reviews and is happening on a much bigger scale now as compared to few years ago.

AI is also finding application in improving sustainability. For example, in Sep 2019 JW Mariott took the initiative of going ‘plastic-free’ with its Artificial-Intelligence technology-based water treatment and purification plant.

In the branded hotel category, Marriott International with the merger of Starwood Hotels and Resorts, has outpaced Taj Hotels Palaces Resorts Safaris (including Ginger) to hold the largest hotel inventory in India.

IHCL and ITC Hotels are the most popular operators with a very wide presence. Chalet Hotels and Lemon Tre hotels are scaling up rapidly post COVID-19.

In 2019, Chalet Hotels Ltd (CHL) launched a successful IPO in early 2019. It also decided to scale up partnership with Marriott Intl by signing 5 new contracts in Dec 2019.

Radisson South Asia Pvt Limited is aggressively expanding its presence and as per annual filings generated a Revenue of 75 Crore (~$11 Million) in FY 2019.

Chicago headquartered Hyatt Hotels Corporation currently has 32 hotels across 20 cities under its eight brands in India. In 2019, it had announced that it will open 11 new hotels in India by the end of 2020. It is also looking at expanding in tier II and tier III cities in coming years.

The major players in hotel industry in India are