India is an important market in Asia with ~16 million vehicles sold annually, 12.5 being two-wheelers (largest 2 wheeler market in the world). The average price of the vehicle sold is also lower compared to China, USA and Europe.

Among the passenger cars, mid and entry-level hatchbacks dominate the market while among 2 wheelers 75% of the market is below 150 cc. 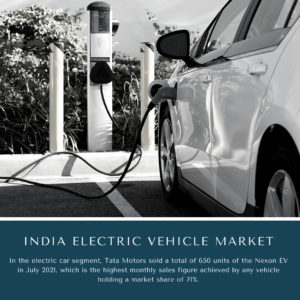 Hero Electric remains India’s no.1 manufacturer in this segment and saw its retails increase significantly Year-over-Year from 399 units retalied in July 2020 to 4,218 units in July 2021.

Piaggio has reported an increased retail sales in July 2021 with 3,826 units.

The number of unregistered electric three wheelers is estimated to be at 59,000 units

There currently exists a FAME-2 subsidy for all-electric vehicles except buses where Rs 15,000 per kWh of the battery is subsidized up to 40% of the overall vehicle price. States have also implemented subsidies for electric vehicles as well as budgets for infrastructure development

Maharashtra unveiled its new policy which came into effect on 13th July 2021 and will be valid till 31st March 2025. Maharashtra aims to accelerate the adoption of BEVs in the state so that they contribute to 10% of new vehicle registrations by 2025. The demand-side incentive structure and target under Maharashtra’s new EV policy was 10% of two-wheelers, 20% of three-wheelers and 5% of four-wheelers by 2025. Buyers purchasing EVs before 31 December 2021 will be eligible for ‘Early Bird discount’ of INR 5000/kWh of vehicle battery capacity. Along with these, this policy lays out incentives for setting up charging stations, supply-side incentives to attract manufacturing in the state,and the launch of the Zero Emission Vehicle credit  programme.

Rajasthan Government issued a notification on 16 July 2021, regarding the state’s EV Policy to encourage EV adoption. As per the notification, a provision is made to reimburse the SGST (State Goods and Service Tax) amount and give a one-time grant to EV buyers. Recharge of the SGST amount is payable on all types of EVs.

Charging stations have been allocated for states across the country with Rs. 10,000 Crore for a period of 3 years commencing from 1st April 2019 under the FAME scheme

They are along the lines of decreasing overall vehicle price, improving charging infrastructure as well as increasing government fleet and public fleet to electric vehicles 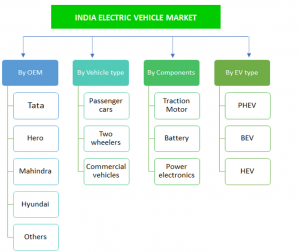 In 2020, Hero electric, Okinawa, Ampere and Ather held the market for EV two wheeler sales. For Passenger cars, Tata, Mahindra, and MG were the largest players.

COVID-19 severely affected the automotive industry, and the disruption of production and shutdown of plants due to multiple phases of lockdown imposed by the government had its impact on demand for electric cars, electric two-wheelers and electric three-wheelers. The supply of lithium-ion battery packs got impacted due to COVID-19 pandemic. This was followed by a clampdown by the government on shipments coming from China as India depends on China, which has a monopoly in lithium-ion cells, for making battery packs. The lack of interest shown by banks to finance electric vehicles also impacted the Indian EV market. However,the economic slowdown is impacting the environment, also creating new challenges for India’s clean energy transition including supply chain shortages,liquidity, financing constraints, job losses and reduced workforce. The concerns regarding the negative effect of climate change, along with the growing carbon emission in major cities have created a significant demand for electric vehicles in India.

E-commerce companies such as Amazon launched e-Mobility for last-mile deliveries to reduce carbon footprint. India is already experimenting with e-Mobility for public transport, and the country has deployed electric intercity buses across some major cities. The EV market in India has gained significant momentum after the implementation of the FAME India scheme with its aim of shifting toward e-mobility in the wake of growing international policy commitments and environmental challenges. This will contribute to higher revenue collection through GST, export duties and will propel employment and economic progress of the country. With this opportunity, the government of India, OEMs and car makers should create an ecosystem to make India a manufacturing hub of EVs. To achieve this, India had pioneers in the lead acid batteries space like Exide Industries, Amara Raja Batteries, etc.,who can contribute to the plans of making and exporting EV components like Li-ion batteries in India will increase the growth of EV market.

Maruti Suzuki’s parent company, Suzuki Motor Corp will enter the EV market by 2025, starting with the India market. They planned to launch an all-electric model, which will be an iteration of the Celerio which will cost around INR 10-11 lakh. The company also planned to invest INR 18,000 crore for a new production facility in Haryana.

Ola Electric raised $100 million in long term debt from Bank of Baroda for setting up a 500-acre factory in Tamilnadu’s Krishnagiri, aimed to make 10 million vehicles a year at full capacity – July 2021

MG Motor India and Fortum Charge & Drive have set up a 50kW Superfast public EV charging station in Pune. This smart chargers can be accessed by anyone who has an EV car compatible with the CCS2 (Combined Charging System), by registering on Fortum’s mobile app – July 2021

Magenta EV has set up India’s largest public EV charging station in Navi Mumbai. This public charging station will be functional 24*7 with 21 AC/DC chargers for electric vehicles. These chargers are powered with combined 40 KW rooftop solar power and can be operated through the ChargeGrid App with online remote monitoring including an automated payment gateway – June 2021

EV sales registered in July 2021 reported a MoM increase of 134.8% at 26,127 units driven by the increase in Electric 2-Wheeler registrations followed by FAME-II notification which increased the incentives on EVs, further bringing down their prices. Among all the states and Union territories, Uttar Pradesh continues to have maximum monthly registered EV sales with 17% of overall sales in India, July 2021. Karnataka has the second highest sales at 15% share followed by Tamilnadu share of 12% and Maharashtra share of 10%.

The overall high-speed electric two-wheeler (HS-E2W) sales stood at 13,345 units in July 2021, reported an increase of 229% MoM over the previous month, and a YoY leap in registrations of 835.83%. The sales of electric three-wheeler (both passenger and cargo-type) in July 2021 stood at 10,873 units, increasing MoM ny 89%.This increase was driven by passenger type EV, which is increased by 93.89% over last month, while the share of overall sales of cargo type EV fell to 10%. The cumulative sales of electric four-wheelers in July 2021 stood at 967 units, with a MoM increase of 66% and YoY increase of 173.16%.Tata Motors continued its dominance in this segment but its share dropped from 76% from last month to 66% in July 2021. MG Motors, on the other hand increased its share from 20% to 29% in the same period.

Among the electric two wheelers in India, there are 32 brands with more than 100 models in the market. By 2026, there will be a substantial decrease in the number of players as those who can not compete will lose their position. In 2020, only 11 players managed sales above 3 digits in the market.

Among the passenger cars, Tata, MG, Hyundai and Mahindra are the current players in the market. Since the market is very price sensitive, subsidies will drive it and urban areas will be the target markets. Maruti as well as Renault have spoken about possible electric vehicles to hit the market over the next 2 years. The market will be dominated by fleet usage mainly taxis and fleets with fixed path operations as running costs will be much lower than an ICE fleet and the capital invested can be returned over the course of 3-4 years.