In commercial vehicle segment, replacement tire market is twice as big as OE market whereas in passenger car and two-wheelers it is almost equal to the OE market.

The India tire market size is estimated at ~$9-$9.5 Billion annually., exports make up for less than 20% of overall industry revenue.

SUVs now account for more than 25% share of Indian car sales, 1.5X more than 10% share in 2014. Many tire manufacturers have introduced multiple new products in this segment. For Example, MRF introduced “Markus” which is an OE fitment on premium SUVs like Mahindra Alturas and Skoda Kodiaq. The new “Wanderer street” was chosen as OE fitment on popular compact SUVs like Hyundai Venue and Mahindra XUV 300.

GoodYear launched Wrangler AT SilentTrac  in Sep 2019  in 15 to 17 inch size range aimed at SUVs.

The change in axle norms that came into effect in August 2018 had a disruptive effect on the commercial vehicle market in India and truck tire market segment. most tire companies had to undertake new tire development as a new tire size was required to meet the increased axle loads. 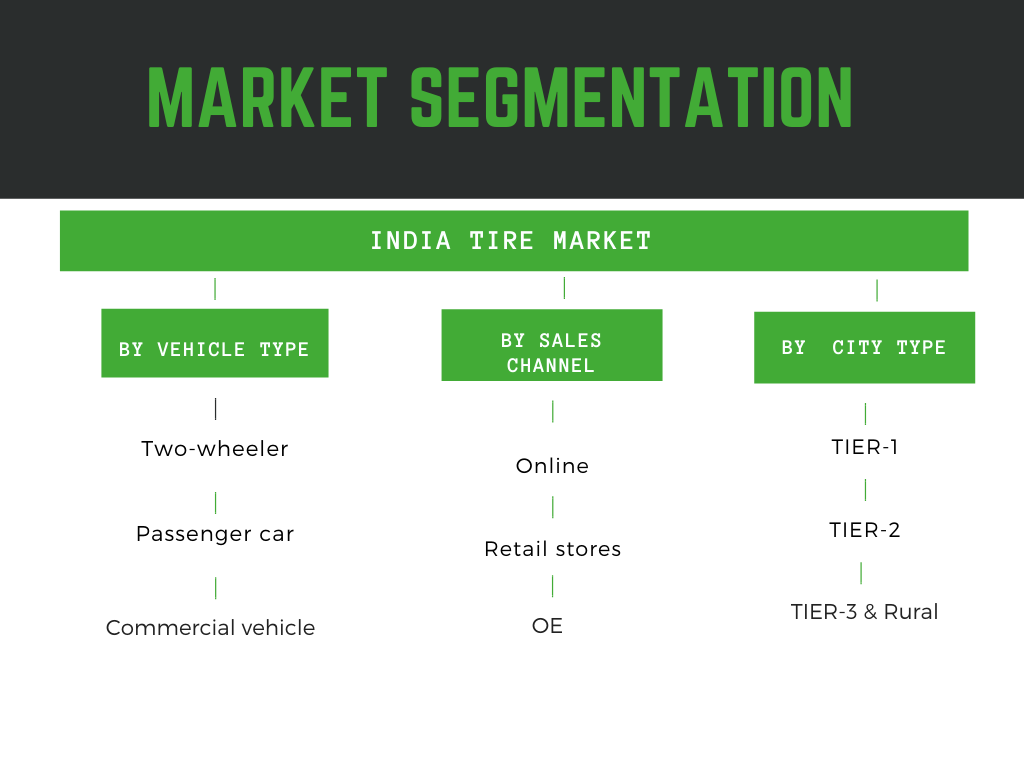 The competitive landscape of India tire market is consolidated at the moment. MRF is still the market leader with more than$2 Biilion annual revenue in FY 2019 and  35% market share, down from 48%, 4 years ago. MRF has been the leading Indian tire manufacturer for more than three decades and is among the top 20 global tire manufacturers.

Other market leaders include Apollo, JK and CEAT  with 29% and 19% and 16% market share respectively. Apollo has emerged the strongest contender for market leadership, and has grown its revenue by almost 40% in past four years.

J K Tyre, India’s biggest commercial vehicle tyre manufacturer is depending on the growing replacement market and exports to counter the  slowdown in the Indian auto industry. It derives more than 75% of its revenues from the replacement market.

In FY 20, CEAT, MRF and Apollo have commited capex to the tune of $800M , which is a significant number when the auto industry in the country is battling severe slowdown across all segments.

Most of the tire manufacturers in the country have launched new products to cater to growing segments. For  ex – in two-wheeler segment, premium motorcycles are a growing trend whereas in passenger car segment, SUVs have been growing in number.