Lithium-ion batteries are common in consumer electronics. They are one of the most popular types of rechargeable battery for portable electronics, with one of the best energy-to-weight ratios, high open circuit voltage, low self-discharge rate, no memory effect, and a slow loss of charge when not in use.

Beyond consumer electronics, lithium-ion batteries are growing in popularity for military, electric vehicle, and aerospace applications due to their high energy density. In recent years, with the rapid development of nanotechnology, nanomaterials are promising candidates for lithium-ion battery electrodes. 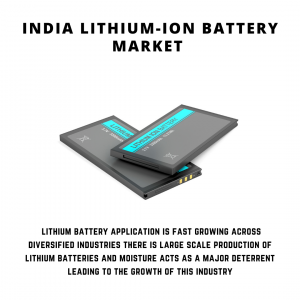 As lithium-ion battery electrode materials, nanomaterials have some unique physical and chemical properties, such as the large surface area, shorter transport length, high reversible capacity, and long cycle life. Energy storage in lithium-ion batteries is based on the intercalation of lithium, either in a type of graphite (negative electrode) or in an oxide (positive electrode). Charging and discharging consist of the transport of lithium ions between the two-storage media.

To meet the increasing demand for energy storage, particularly from increasingly popular electric vehicles, intensified research is required to develop next-generation Li-ion batteries with dramatically improved performances, including improved specific energy and volumetric energy density, cyclability, charging rate, stability, and safety. There are still notable challenges in the development of next-generation Li-ion batteries. New battery concepts have to be further developed to go beyond Li-ion batteries in the future.

Lithium is the primary source for Li-Ion battery packs as it is more stable and safer in charging and discharging energy compared to other minerals. Aside from the electronics industry, lithium is a staple mineral in mining, manufacturing, energy storage and many others. Due to its many industry uses, the importance of lithium-ion batteries cannot be overstated.

Since lithium battery application is fast growing across diversified industries there is large scale production of lithium batteries and moisture acts as a major deterrent leading to the growth of this industry. Lithium batteries are affected by uncontrolled temperature and humidity.

While most of these players are setting up their base in India or have announced manufacturing and assembly lines for li-ion batteries, the scale at which the production is expected to take place for the electric vehicle market is still not enough capacity.

Additionally, the adoption of electric vehicles in India has not left any impact on the industry yet due to challenges such as the high cost of vehicles (for two and four-wheelers), lack of charging infrastructure, range anxiety, charge anxiety and others.

The lithium-ion batteries market in India is expected to grow significantly in the next five years. Some of the important initiatives by the Government of India that will accelerate the growth of this market are National Electric Mobility Mission Plan 2020, with a projection of getting 6-7 million electric vehicles on Indian roads by 2020 and a target of 175 GW installation of renewable energy by 2022.

The Indian Market of Lithium-Ion Battery can be segmented into following categories for further analysis.

Battery technology is ubiquitous in modern life, from portable electronics through to transportation and grid scale energy storage. The demand for batteries is still growing globally. It has seen considerable growth in the recent years within India based upon the subsidies and improvised policies being mobilised by the Government Initiatives.

Lithium metal batteries (LMBs) are nonchargeable primary batteries that have metallic lithium as an anode. Although feasible, a rechargeable (secondary) variant of LMB has not been commercialized on a larger scale. LIBs, which employ a graphite-based anode, were commercialized in the 1990s.

Li-ion batteries can be characterized as energy storage systems that rely on insertion reactions from both electrodes where lithium ions act as the charge carrier. There are several different cell chemistries that make up the Li-ion battery family. Most Li-ion batteries use a negative electrode principally made from carbon (e.g., graphite) or lithium titanate (Li4Ti5O12), with some novel materials under development, namely, Li metal and Li(Si) alloys.

LMO utilises manganese-based cathode. It is less costly and safer than other LIB variants. However, manganese dissolution reduces the battery life span at high temperature (~50°C). LFP is the safest battery chemistry with long cycle life. It is cheaper than other LIB variants as it does not use nickel or cobalt. However, it has low specific energy.

NCA has high energy density and cycle life. It has the highest shelf-life (~15 years) but is more expensive than LMO due to the use of nickel and cobalt. NMC is less costly due to economies of scale and safer compared to NCA[4]. It has a high cycle life. Due to its high performance, battery manufacturers prefer this battery though it has nickel and cobalt.

Subsequent to the foundation of the Lithium-ion (Li-Ion) battery laid during the 1970 oil crisis and introduction of the first commercial Li-Ion battery in 1985, Li-Ion battery technologies have developed and attracts significant attention in the energy storage applications because view of their superior energy density of 75-200Wh/kg, specific density of 150-315 Wh/l, cycle stability, efficiency, and reliability.

The Organisation is involved in TDSG LIB production as part of its pilot project which is a highly safe rechargeable battery with six outstanding characteristics by using oxide-based materials (Lithium Titanium Oxide). TDS’s LIB is designed to prevent thermal runaway resulting from short-circuiting caused by physical stress.

Exide Industries India has been recently part of a Joint Venture requirements being established so as to have a better access to engineering resources that provide lithium-ion batteries and energy storage solutions. It has been actively involved in introducing ‘ultra-batteries’ and other solutions in the energy storage space and the lithium chemistry domain.