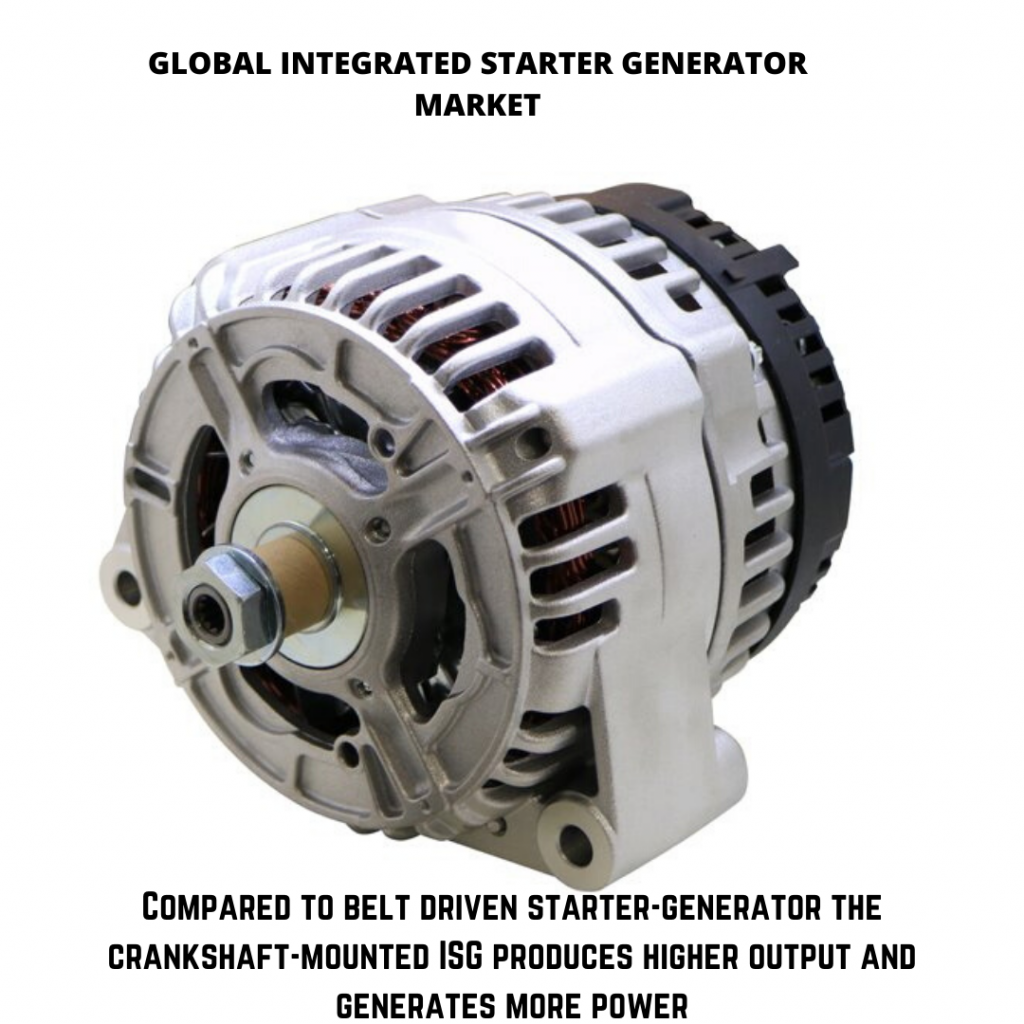 By Type of Hybridization Circuit

The increased concern to reduce carbon emission is propelling various features and systems that achieve this. And the ISG is one of those systems which have successfully been able to reduce the carbon emission upon its installation. The features such as automatic start and stop, where the ISG helps the vehicle to turn off the engine/motor upon coming to halt. The regenerative braking feature which helps to decelerate the vehicle by generating the electric power is powered by ISG. The ISG also assists the ICE (Internal Combustion Engine) by providing the supplementary power during fast acceleration.

Mitsubishi Electric’s 48V ISG system is directly coupled with the 48V hybrid vehicles. Mercedes in its hybrid models were the first to incorporate these ISGs in 2017.

BY TYPE OF HYBRIDIZATION CIRCUIT

In the series circuit the ICE drives the alternator and generates current. It is stored in battery and it runs the motor to drive the wheels. In parallel circuit both ICE and motor drive the vehicle however at cruising speeds, only ICE drives the wheels. The series circuit generally gives higher power output and run with much more efficiency than the parallel ones. The series parallel hybrid system uses a powersplit to switch from series to parallel and vice-versa.

The start stop function is most common feature in every top selling car in the top markets As it contributes to 15% less CO2 emission the function has dominated the market whether it’s ICE vehicle, PHEV or BEV.

In the micro hybrid vehicles the ISG assists to perform only start and stop. In the mild hybrid vehicles ISG helps the engine by providing supplementary power during fast acceleration. The plug-in hybrid vehicles demand for higher power output from the ISG as they have to supply current to the battery to power the vehicle driving motor.

The below table shows the power run by ISG and effects of it:

In USA the top selling cars feature the start/stop option. The regenerative braking option is also found in the few models such as RAM 1500 and Toyota RAV4. Among the LCV more than 10% of the trucks sold in 2019 featured start-stop option in the region.

The target to achieve average CO2 emission for new passenger as 95 gm/km has positively affected the growth in the sales of hybrid vehicle immensely. Every top selling car in Europe feature the start/stop, keyless start and automatic stop function. Vauxhall Corsa feature regenerative braking system too.

China has been the leading market in the hybrid passenger cars. Among the top selling cars the start/stop function is found in most vehicles except for Wuling Hongguang and Nissan Sylphy.

The top selling cars such as Baleno and Ertiga from Suzuki feature the smart hybrid feature. The introduction of ACG (Alternating Current Generator) in Honda scooters will propel the ISG penetration in 2 wheeler segment.

Suzuki UK was expected to launch new range of hybrid cars Vitara, S-Cross and Swift Sport by spring 2020. These vehicles are to feature 12V Hybrid SHVS (Smart Hybrid Vehicle by Suzuki) which consists of Integrated Starter Generator. The launch is halted due to ongoing pandemic outbreak.