Tire manufacturers are creating tyres that assist the environment by improving fuel economy and reducing noise and weight in response to environmental concerns caused by global warming and the implementation of environmental legislation across the world. These tyres also stress cost-effectiveness and environmental friendliness while preserving safety and dependability. 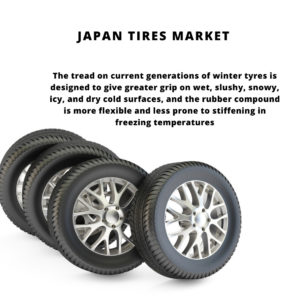 Tires can also be found on heavy duty trucks, buses, aircraft landing gear, tractors and other farm equipment, industrial vehicles such as forklifts, and common conveyances such as baby carriages, shopping carts, wheelchairs, bicycles, and motorcycles. Natural rubber is the main raw material used in manufacturing tires, although synthetic rubber is also used. In order to develop the proper characteristics of strength, resiliency, and wear-resistance, however, the rubber must be treated with a variety of chemicals and then heated.

The advancement of tyre technologies has prompted the investigation of methods to optimise the materials, structure, tyre profile, and tread design, which is also resulting in the creation of technologies for next-generation tyres that satisfy even more demanding criteria. Tires are supposed to operate well in a variety of areas, including fundamental tasks. Because lowering rolling resistance interferes with wet and dry performance, tyre innovations that increase wet and dry performance while also reducing rolling resistance are being researched.

Tire purchasing  and  disposal  impose  considerable  cost  and  waste  burdens  on  private  vehicle owners and fleet managers. The tire maintenance management practices and tire-related vehicle technologies that have the potential to relieve some of the vehicular burdens. Alongside these, the behaviour, attitudes, and practices of fleet personnel and individual drivers relate to tire  attributes and technologies.

The need for additional improvement in energy efficiency in transportation is being debated internationally, as the IEA (International Energy Agency) presented a suggestion during the G8 Summit. In light of this, the Japanese government formed the “Fuel Efficient Tyre Promotion Council” to research the promotion of fuel-efficient tyres, among other things. JATMA took part in it, and talks centred on specific actions were held on a regular basis beginning in January 2009. Finally, in January 2010, JATMA launched their optional standard “Tyre Labelling System,” which clearly displays the performance levels of fuel-efficient tyres on the labels for customers, with the goal of further promoting fuel efficient tyres.

The growing population levels and rising consumer disposable income levels have augmented the demand for automobiles, which is primarily driving the Japan tyre market. Worn  tyres  could  be  a  threat  to  road  safety.  They’re  easier  to  slip, especially  on  wet  roads  because  of  the  degradation  of their braking performance, compared to new tyres. Thus the Ministry of Land, Infrastructure, Transport and Tourism prescribed requirements for tyre groove depth (minimum groove depth) in its Safety Regulations for Road Vehicles and proscribed the use of tyres of insufficient groove depth on roads.

With global initiatives to address environmental preservation making vehicles more fuel efficient, the demand for products that take consumer awareness of environmental protection into account in the tyre market is increasing, resulting in an increasingly stringent demand for lighter tyres with lower rolling resistance. In terms of weight reduction, research and development is concentrating on the use of streamlined materials as well as novel materials and architectures. Because rolling resistance is primarily caused by tyre deformation caused by heat creation during driving, solutions include decreasing the amount of rubber heat generated.

On the technological front, many tyre manufacturers have developed their own unique technologies for removing the water layer on icy surfaces to increase tyre friction, or specific rubbers for studless tyres. Furthermore, they are focused on technological advancements encompassing thread design as well as structural and material concerns. These efforts are targeted at boosting performance on highways where frequent stops and starts, particularly near junctions, have led studless winter tyres to compressed snow into mirror-smooth surfaces (black ice).

The tread on current generations of winter tyres is designed to give greater grip on wet, slushy, snowy, icy, and dry cold surfaces, and the rubber compound is more flexible and less prone to stiffening in freezing temperatures. A three-peaked mountain snowflake emblem distinguishes tyres suited for usage in extreme snow conditions. This tyre manufacturer-created mark is a performance-based standard that signifies the winter tyre achieves a snow traction index of 110 percent when tested using the ASTM F-1805 snow traction test, when compared to a known control tyre.

Yokohama Tires has been focused on development of the tires technology of SUVs and CUVs.  The AVID Ascend GT is an all-terrain operable tire. With all-season traction that performs even in the wet and snow, a quiet ride and long tread life, this premium grand touring tire delivers year-round performance in all kinds of weather, for all kinds of vehicles. It has been integrated with a TriBlend Compound and asymmetric groove arrangement to deliver ultimate grip on wet and snowy roads. To have better control over noise emission, the Multi-Pitch Tread Design and Adaptive Shoulder reduce noise when new and protect against noise after worn.

Toyo Tires is developing new technologies for all terrain operable tires. The Specialised design of treading is the main focus of approach for the Toyo Tires. It has been integrated in such a manner, wherein it offers excellent traction and tread life along with a blatantly aggressive tread design and quiet ride. The tires feature a deeper tread depth and a more aggressive tread and shoulder design. See size specifications for a list of sizes, designated by “XT” under Construction.