According to the Small Arms Survey, light weapons include mortars up to 120 mm in calibre, hand-held, under-barrel, and automated grenade launchers, heavy machine guns, portable anti-tank, and anti-aircraft missile systems, as well as anti-material rifles, recoilless rifles, and cannons. As of 2008, at least 51 nations produced light weapons, 45 of which produced one or more complete systems and 6 of which produced components or upgraded existing systems. 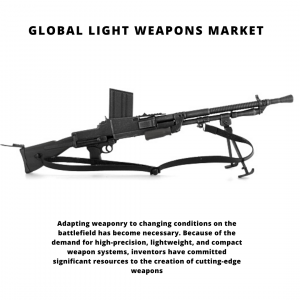 Armed organizations all around the world have adopted and frequently deployed light weapons. Light weapons of the newest generation are more deadly, more portable, more generally competent than earlier systems, prompting worries about their uncontrolled spread. According to the Small Arms Survey, at least 60 non-state armed organizations now or previously possess guided light weapons. Experts believe that there are at least 875 million tiny firearms in circulation worldwide, with 650 million of those belonging to civilians. Small weapons manufacturing involves more than 1,000 firms in over 100 nations, with the largest producers concentrated in about 30 countries. Small weapons trade is the least open of all weapon systems.

Security is harmed by the spread of small guns and light weapons, while anti-personnel mines and other weapons of mass destruction continue to maim and kill civilians and animals long after conflicts have ended. Both have the potential to destabilise social, sociological, and economic growth, as well as pose serious threats to regional and national security.

SALW stockpiles play a critical role in the illicit trade. Non-state actors can easily divert weapons from governments or commercial suppliers because certain facilities storing weapons and ammunition are not adequately guarded and monitored. The danger of explosions at these storage facilities endangers populations, forcing them to flee their homes and wreaking havoc on the environment. Small guns and light weapons are critical to human security because of their impact on public health, human rights, and social and economic development. This makes them more of a human security concern than a national or military security one.

Over the last decade, raw material costs have fluctuated dramatically. As a result, conflicts over defence contract terms like the transfer of technology clause have led to the cancellation of approved projects. With their ability to penetrate and disable substantially armoured adversaries, light weapons are likely to be in high demand in the future. Countries in Asia-Pacific, the Middle East, and Africa are increasing their yearly military budget and spending to fund the modernization of their armed forces’ arsenals because of the expanding geopolitical divide.

Adapting weaponry to changing conditions on the battlefield has become necessary. Because of the demand for high-precision, lightweight, and compact weapon systems, inventors have committed significant resources to the creation of cutting-edge weapons. A high target hit ratio has been achieved through the development of guided weapons using a variety of attachments such as weapon sights, night vision devices, laser targeting and rangefinders as well as firing control systems. Due to political turmoil with China and Russia, the United States is boosting its military spending, which is pushing investments in extending and updating its deployed weapons with new technology to enhance its armed forces. This increase is being led by the United States.

The Global Light Weapons Market can be segmented into following categories for further analysis.

SALW threaten human security more than any other conventional weapon type because of their unchecked spread and wide availability. They harm fragile economies, deter foreign investment, divert economic resources, and make it difficult to meet basic human needs, as well as facilitate human rights violations. As a result of these factors, the desire for firearms rises. This never-ending loop is a hindrance to progress.

Light weapons production has benefited greatly from 3D printing. The fact that this technology may be used for criminal, or terrorist purposes is a major cause for worry. Theft or purchase of weapons on the black market may take less work than printing a dependable, lethal weapon right now. However, this may soon change as 3D printing’s production prices fall and its quality rises, making it a viable option for small-scale illegal weapon manufacturing and sale.

As part of much required Light Weapons requirements, the identification of weapons across borders, several automatic identification and data gathering systems are limited in their applicability. To scan barcodes or RFID tags, there is a need for an extra set of tools. It’s possible that weapons discovered far from where they were last legally used don’t come with the appropriate tracking devices. This must be taken into account while making judgments about the application of such technology.

As a bonus, high-precision micro marks can be used in difficult-to-remove places on a weapon without being detected by people trying to remove them. Micro marking the weapon’s firing pin can also leave an imprint on each fired cartridge, making it easier to collect forensic evidence for criminal investigations. Nano trace is already being used to protect and identify precious items such as artwork, jewels, and so forth. Using a microscope or a light with a specified wavelength, it uses tiny particles holding information to uniquely identify every given object. Small alphanumeric flakes, threads, or bits of multi-layered laminated materials with a distinctive colour combination can represent alphanumeric data. Using this technology with SALW there has been a possibility for a security mark, although it’s not as well-suited to that role as, say, the microdot.

By providing easy access to lethal small guns and light weapons, armed conflict, terrorism, and criminal activity are made possible. They’re still one of the most affordable and accessible ways to take part in violence today. It’s tough to regulate SALWs on a global scale effectively. SALWs are cheap and simple to make, hide, and use. And there are now 875 million small arms and light weapons (SALW) in circulation.

SAAB in collaboration with Bofors Dynamics has produced a lethal Light weapon under the major development project. This 84mm anti-armour weapon is made by Saab Bofors Dynamics and is known as the AT4. It is useful against tanks, combat vehicles, landing craft, helicopters, and armoured vehicles. Aiming at the target with the AT4 is accomplished through range-adjustable plastic sights, which can be covered up under the sliding covers.

The weapon carries  an optical night sight. Deliveries of the AT4 CS ER (extensive range) and AT4 CS HP (high penetration) are anticipated for 2018 after Saab received an order from an unnamed customer. In October of last year, the US Army ordered AT4-CS RS weapon systems for $13.4 million, with delivery set for 2019. In July 2018, it ordered an additional 50 million dollars’ worth of AT4-CS systems. The US military has received almost 600,000 AT4s thus far.

Denel SOC has been involved in production of highly advanced infantry based light weapon systems into the military requirements and operations. The NTW20 is an anti-material weapon that engages high-value targets such as radar installations, petrol tankers, static helicopters and planes, command and control facilities, and so forth.

It’s not required to be a Sniper Rifle. Instead, it’s a Bolt Action Rifle that can fire a variety of 20x82mm rounds (such as HE, AP, and so on), providing it the power to take out valuable targets. A Recoil Management System lowers the Peak Force to a Pushing Force rather than a Kicking Force, allowing even small-built warriors to fire it. Two soldiers may carry the Weapon in custom-made back packs after it has been disassembled. Additionally, the NTW 20 may be installed on light-duty automobiles.