On ships, a chart plotter combines GPS data with an electronic navigation chart (ENC). Additionally, radar, automated information systems (AIS), and other sensors may be used to show additional information on the chart plotter in addition to the ENC. Chart plotters may also show data from additional sensors, such as echolocators or sonar, depending on the application. 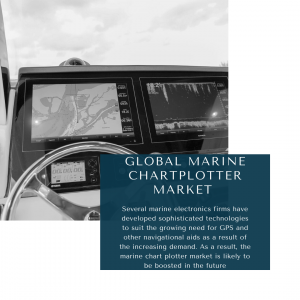 Electronic chart plotters are CPU and GPU heavy programmes by their very nature. It is necessary for chart plotters to retrieve the Navigation Signal (Galileo, GPS, GLONASS, WAAS etc.) and overlay it on a map in order to function. When using specialised hardware, map updates are generally shown at a refresh rate ranging from 5 to 30 Hz. On the other hand, most high-end systems require dedicated hardware. Processing power and video memory requirements might be high, especially if the chart plotter creates three-dimensional representations, as in fishing.

All chart plotters have the same basic navigational display. Their display choices may include three-dimensional fish-finding and bottom features that are beneficial for fishing, depending on the intended usage and the chartplotters exact specifications With issuing a single screen command, these alternate displays can be shown, causing the primary display to be substituted by the one that was requested. There is also the option of split-screen modes on a single screen, as well as multi-display capabilities. It is possible to configure chart plotters to emit audio and visual warnings for circumstances such as a probable collision, deviating considerably from the planned route, etc.

SONAR systems for search-and-rescue operations and anti-submarine warfare systems are likely to drive the worldwide marine chart plotter market to new heights in the years to come. It is also predicted that current boats would be upgraded in the future with technologies such as marine chart plotters, which is likely to boost market development. Chart plotters are a vital piece of equipment for a naval vessel’s safety. For the projected period, chart plotter systems are likely to assist in detecting fish, which in turn is expected to fuel the market growth.

Europe, East Asia, and North America account for a major portion of global commerce. The need for maritime navigation systems is therefore primarily driven by these areas. On the back of recent gains, the outlook for Denmark and Sweden’s maritime navigation systems industry in the future years has improved. Swedish economy is anticipated to develop at a faster rate than that of Denmark and Norway.

It appears that the Chinese Government as well as China’s National Shipbuilding Sector Association are ready to support R&D efforts in order to modernise the industry and develop marine navigations perspectives. Several marine electronics firms have developed sophisticated technologies to suit the growing need for GPS and other navigational aids as a result of the increasing demand. As a result, the marine chart plotter market is likely to be boosted in the future. The industry is also being driven by the rising number of yachts being purchased in tourist nations.

The Global Marine Chart plotter Market can be segmented into following categories for further analysis.

The chart plotter and other gear at the core of boat’s navigation network are continuously being replaced by newer technology, much as mobile phones are. When compared to the simple chart plotter of the past, multifunction displays (MFDs) are unbelievably sophisticated and powerful, capable of crunching radar and sonar information, processing video, and switching and monitoring systems throughout the boat.

The other most interesting integration in the char plotter technology has been screen technology, touchscreen capabilities as well as daylight viewability, so that those instrument displays, which would have previously been 7-segment displays like the HV, will now be in colour. This improved performance comes at a cost in terms of power consumption. With a full backlight on, the 12in device may draw up to 1.8A in streaming mode, or around 1A in regular operation.

Designed for cockpit or mast usage, with a robust Ethernet connection to integrate into your current network, it’s a great addition to any boat. The screen has also been upgraded with in-plane switching (IPS) technology that works through polarising filters. It improves visibility by 25%, and sunlight visibility. A new nano-particle screen coating repels water, oil and smudges better resulting in a touchscreen that is easier for sailors to use accurately, even in wet conditions.

Chart-plotters, like other nautical systems, are rarely utilised on their own. A comprehensive set of marine equipment is used on commercial ships, allowing them to navigate in any weather situation, even rough seas. Sonar transducers, two-way radio communication devices, and emergency locators are among the additional instruments (EPIRB). The integration of various gadgets is crucial, as looking at many screens may be distracting. In this way, displays may frequently include charting, radar, and sonar in one package.

JRC USA has recently introduced the Plotter JLZ 1000 which has brought upon the integration of the latest technology through better adoption and capability of ease of learning. The Split-screen functionality lets you view multiple kinds of information simultaneously and the integrated update support maintains use of the latest charts TT(ARPA) and AIS operation-assistive display capabilities. It has also been installed with new control additions for simple ease of use displaying up to four kinds of various information including charts, highways, analogue meters, and monitoring displays in split-screen simultaneously. The user’s ship’s tracks and marks can be imported from other JRC devices with ease of controls.

Simrad is involved in integration of digital all round display systems for marine chart plotting requirements. Simrad GO series displays are designed to help make the most of your time on the water and are a perfect addition to smaller sport boats, day boats, and centre-consoles. Behind every super-bright GO series touchscreen lies a built-in GPS receiver, echosounder, wireless connectivity, and industry standard NMEA 2000® networking. Navigate, connect with mobile devices, control accessories like your on-board sound system, and choose from an array of built-in sonar support to cruise with confidence or fish like a pro. Radar capability is also available on the GO7 and offers added safety and fish finding functionality while you’re out on the water.