The generator set (genset) converts mechanical energy into electrical energy, with output being in the form of Alternating Current (AC). A genset is the combination of a fossil-fuel-powered engine mounted together with an electrical generator.

Shipboard power is generated using a prime mover and an alternator working together. For this an alternating current generator is used on board. Diesel generators use diesel as a fuel to power the engine. They are the most commonly used gensets. 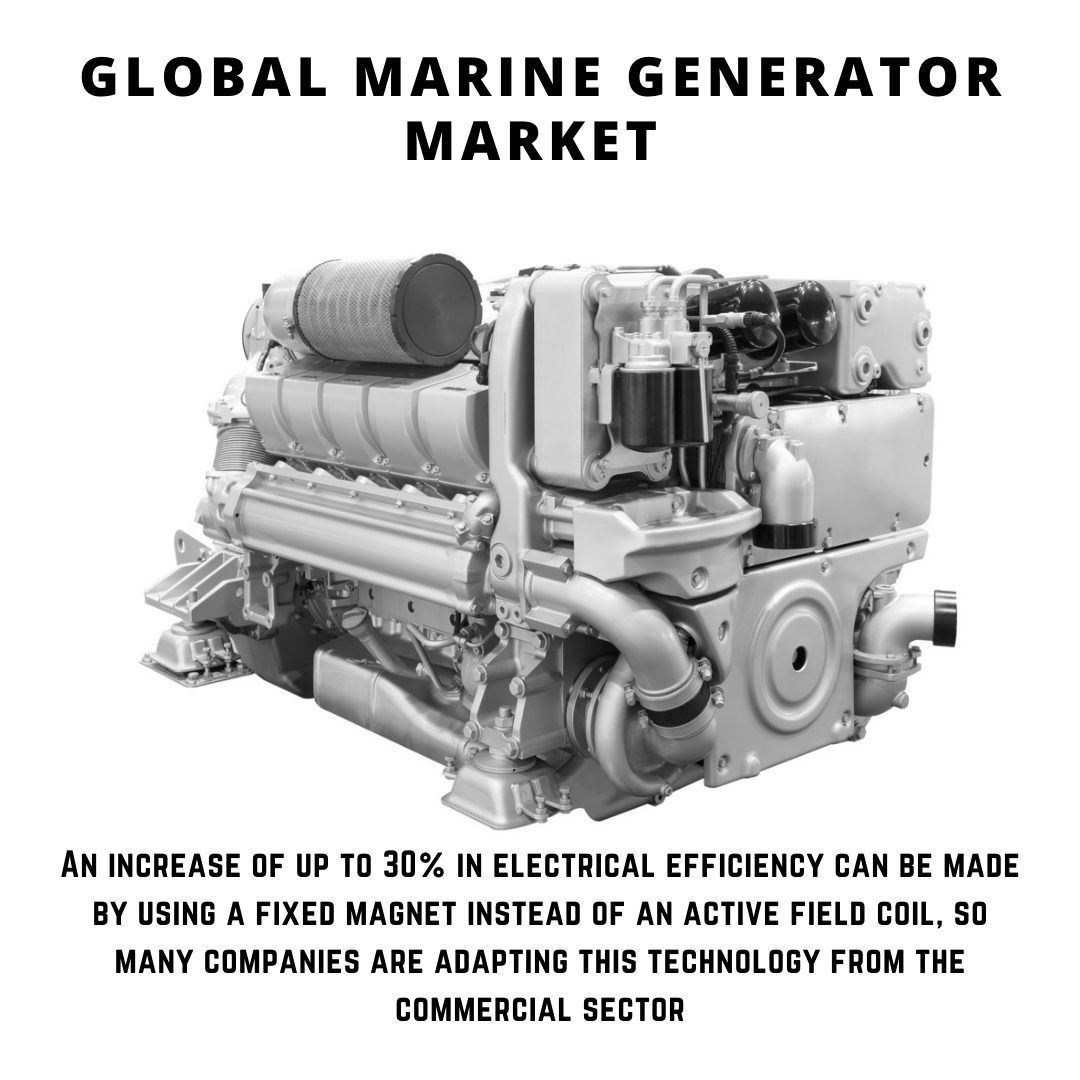 Though diesel is costlier compared to gas, it has a higher energy density, and more energy can be extracted from the same amount of fuel. Compared to gas and other fuels, diesel is less flammable, meaning it is safer to store and handle.

Demands for electrical power have never been higher, and the space the yacht-builders or Ship builders leave for the generators has never been smaller. In the marine engines market, there are fundamentally a few important companies that have a considerable share practically in many sectors.

The development directions in the low-speed engines in the second half of the 21st century sector were such that three designers and licensors were dominant in the in-world production. These were companies MAN Burmeister &Wain, Mitsubishi and then Sulzer dominated the international arena.

LNG marine gensets market size is predicted to expand over 8% by 2025. Ongoing boom in the development and exploration of unconventional gas reserves along with tightening emission regulations will strengthen the advent of these units.

The IMO in January 2015 introduced directives to limit emission from PMs & has reduced the sulphur emissions to 0.10% across the ECAs. Further, the Marine Environment Protection Committee (MEPC), in 2016, introduced a 0.5% limit on sulphur fuel content in global marine traffic that came into effect from January 1, 2020.

The U.S. marine gensets market size is set to exhibit remarkable growth driven by ongoing boom in the shale production & exploration coupled with advancing technological developments to manufacture sustainable units. The region is host to a multitude of shipbuilders and equipment manufacturers aimed at constant R&D ventures in product design.

The Market of Marine Generator Market can be segmented into following categories for further analysis.

When it comes to focus upon usage of Marine Generators on various Classes of Vessels in the Marine Industry, it can be seen that the major factor in recent years has been the sheer number of current-sensitive electronics being used offshore, all of which require an uninterruptible power supply (UPS).

More consumers are choosing to use their boat as a mobile office, running computers, TV screens, printers and sat comms equipment, so there have been some big advances in dependable power management.

In specifics to the technology adopted within the generator sets, fixed-speed generator is optimised to deliver its maximum load at its most efficient setting, commonly at either 1,500rpm (1,800rpm for the US) or 3,000rpm. A variable-speed set adjusts itself through a pre-set rev range to be most fuel efficient for the load at the time. Due to the nature of an alternator, the speed at which it spins governs the AC frequency, so electronics are needed to adjust the variable output to maintain either a 50Hz or 60Hz delivery.

An increase of up to 30% in electrical efficiency can be made by using a fixed magnet instead of an active field coil, so many companies are adapting this technology from the commercial sector. This allows us to unify the compactness of the 3000 rpm models with the silence of the 1500 rpm, whilst also saving fuel.

Currently most generators on the market operate with a fixed speed of 1500 / 3000 rpm 50 Hz (or 1800 / 3600 rpm 60Hz). As high engine speeds mean higher exhaust emissions, manufacturers have started to reduce the speed on several engines to meet new emission standards. However, these are required to operate at higher speed when operating with low loads. This has always been a major concern with regard to the engine lifespan, glassing of the cylinders and high oil consumption.

In positional aspects towards the Battery based generator system, the heart of the system is a large bank of Lithium-ion batteries, equivalent to the total peak load of the boat. A variable speed ‘Genverter’ would be able to recharge this bank in around six hours and would run during the day when noise is less of an issue. While  superconducting  generators  have  strongly been  considered for  naval  applications,  superconducting  motors for  propulsion are under active development.

In perspective of the Corporate exemption within the Global Marine Generator set market, the  Marine Diesel Engines Manufacture Sulzer Brothers Company in Winterthur (Switzerland) have participated in four-stroke and two-stroke design and production since 1879.

Wärtsilä company includes high-power piston self-ignition engines used on passenger ships. In 2016, the corporation employed more than 18,000 workers in more than 70 different countries around the world for its various installations to increase the usage proportions of the generator sets.