Navigation system is a set of systems that provides or assists its user to reach his/her desired destination by reduced time and minimum distance. It is classified in 4 different types:

All the defined navigation system complexities depend on their application. Marine Navigation has a wide variety of uses like fishing boats, Cruise Ships, Merchant ships, Container Ships, Shipping Vessels; each has a different type of set path that needs to be followed on the instruction of the navigator. 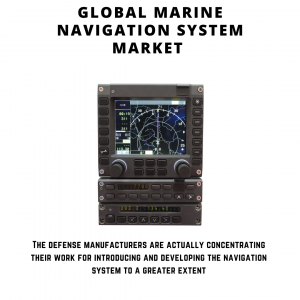 The Navigation system technology is growing day by day because of the maximum trading path of goods from countries to countries taken from the Ocean. Satellites have started playing the most important role on the Global Navigation system due to which overall precision and accuracy of the Marine system has increased and real time Global position of ships can be seen through it.

In old times the big chart and mechanical instruments were used for locating and estimating the current position and direction of the ship. As technology advanced the paper chart has been reduced to a smart screen navigation system.

The evolution of Marine system starts from direction finding, Instruction for sailing (guide), Distance and measurement introduced to estimate the duration of journey, Magnetic compress introduced for direction, etc..

The global marine navigation system mainly depends on ocean traffic. Global sea related trades are continuously determined by the development in the world economy and trade. Now the families and people around the world have started taking interest in travelling around the world via a sea route.

Sea tourism is increasing day by day. The price range, complexity, size, accuracy varies from ship to ship, and like War ship requires a high degree of accuracy and a wide range with quick response time. Few companies like Northrop Grumman, Wartsila, Raytheon Anschuetz, Kongsberg Maritime covers more than 80% of market share around the world. New players have started emerging as well around the globe due to increase in the demand of the system.

Coronavirus has a huge impact on transportation as well as trade of goods and services of countries all over the world. The closure of market and manufacturing factories has forced the countries to use the buffer stock for survival and to fulfill the basic needs.

When the lockdown phase started the huge number of cruise ships, container ship vessels, submarines, fish boats, etc. were in the ocean and the navigation system helped them out to reach their nearest destination in a quicker time.

The demand of personal yacht and boats is increasing after the coronavirus lockdown was lifted that has put the pressure on ancillary and part manufacturing companies to cope up with demand. The European, and US market demand has increased to a specific class of boat that required the well-equipped Navigation system for its guidance.

The main demand is basically concentrated in 3 regions named as Europe, East Asia, and North America. Developed countries like the USA, UK, etc. and developing countries like China, India, etc. are already spending a lot in improving and adding new features to the navigation system.

The defense manufacturers are actually concentrating their work for introducing and developing the navigation system to a greater extent. Each country introduced a budget for improving their internal and national security including the budget of the navy. In recent years countries like India, China, Australia, Japan, Malaysia, South Korea, and the United Kingdom have increased their expenses in these sectors.

Now some countries have opened the market player to contribute and develop the technology for the improvement of defense of the country has helped out in boosting the Navigation system quality, decrease in price, economical, size, etc..

The future of Marine Navigation is going to be wireless, Voice command oriented fully automated system, although the size of antenna is important for the transmitting of data from source to current ship position, but the companies are working a introducing new material and microprocessor in high complexity which can perform the pile of data in few milliseconds. The above specification is increasing the cost of the system but due to introduction of multi players in the market the price of product may decrease in future.

The Recreational Boat market has accelerated at a very high rate in recent years especially in developed countries for pleasure and travel. Many companies provide custom recreational boats as per demand by customers. The Navigation system in these boats has to be reliable since the owner may or may not be expert in using the navigation system.

The complexity of showing data may be decreased so that a normal person can understand the basic required details for their travel destination. This has led the companies to design and manufacture the Navigation System that can be easily understood and operated by normal humans instead of professionals.